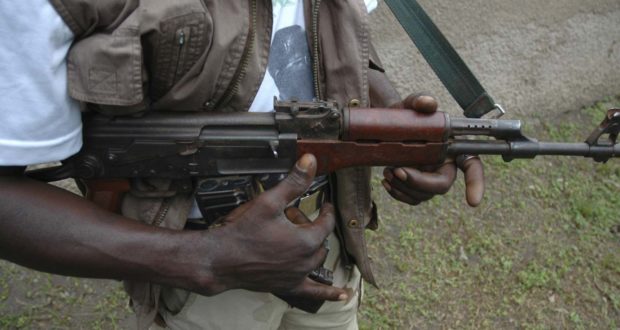 This is contained in a statement issued by the command’s Spokesman, Mr Babawale Afolabi, and made available to the newsmen in Ilorin on Friday.

Afolabi said that the gunmen, suspected to be kidnappers, had, on Oct. 28, shot a woman while attempting to kidnap two teachers in Osi-Ekiti.

He said that two female teachers of Ikerin Secondary School in the town were on their way home after school hours when they were double-crossed by the gunmen.

“It was around 4:30 pm. on Oct. 28 when our operatives at Araromi, Opin-Ekiti Divisional Office, got a distressed call about a failed kidnap attempt.

“NSCDC officers, with some local hunters, met at the scene of the incident, but the gunmen had disappeared.

“One of the two women they wanted to abduct sustained minor bullet wounds but she is currently responding to treatment at a hospital.

“Officers of NSCDC have joined forces with the tactical team of Operation Harmony and the local hunters to search for the miscreants,” he said.

In the meantime, the Police Command in Ekiti State has confirmed the release of eight persons abducted by unknown gunmen at Itapaji in Ikole Local Government Area of Ekiti last Sunday.

ASP Sunday Abutu, the command’s Spokesperson in a statement on Friday in Ado-Ekiti said the eight abductees had regained their freedom and reunited with their families.

According to him, the release of the victims was made possible through concerted efforts of police, the military, the NSCDC and the Amotekun Corps as well as that of the victim’s families.

“They have all been debriefed and reunited with their family members,” he said.

Abutu said investigations were still ongoing into the arrest of four suspects in connection with the abduction of the eight persons.

He said the arrested suspects would be charged to court as soon as investigation on their culpability was concluded.

Meanwhile, a source close to one of the victims, told journalists in Ado Ekiti, on Friday, that the captors collected a sum of N2.5 million, a pack of cigarettes and one pack of milk to set the abductees free.

Newsmen gathered that the gunmen had besieged a house located at Itapaji town around 9.30 pm last Sunday, shot sporadically into the air and made away with eight occupants of the building.

The gunshots that lasted for over one hour were said to have terrified the residents of the community.

In a telephone chat with newsmen on Friday, the source said the captives were freed around 10 pm on Thursday and were immediately reunited with their families.

“They have been released on Thursday evening. The kidnappers collected a sum of N2.5m, a pack of cigarettes and one pack of milk before they were allowed to regain their freedom,” the source revealed.