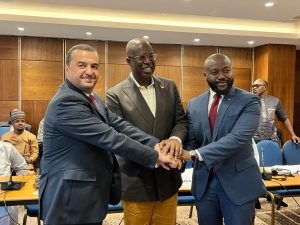 L-R: Algerian Minister of Energy and Mines Mohamed Arkab, Minister of State Petroleum Resources Chief Timipre Sylva, and Nigerien Minister of Petroleum Mohamane Mahamadou, at a meeting of the reactivation of the Trans-Saharan Gas Pipeline Project in Abuja, on Monday

The Federal Government says the 13 billion dollars Trans Sahara Gas Pipelines (TSGP) project will present a huge opportunity for Nigeria, Niger, and Algeria to tap into the European markets.

The project, which would run from Nigeria through the Niger Republic to the Mediterranean Coast of Algeria would also target gas supplies to Chad and Mali.

Chief Timipré Sylva, Minister of State for Petroleum Resources at a meeting of the parties in Abuja on Monday, said Nigeria and its African partners, Niger and Algeria had intensified efforts to actualize the project.

According to the minister, it will bring their huge gas resources closer to the European market, especially with the high cost of gas occasioned by the war between Russia and Ukraine.

“The project takes our gas to the European market directly.

Today a lot of gas in Nigeria is stranded or re-injected because there is no infrastructure to take the gas to market.

“This project is going to take the gas all the way from where it is produced to the European market, and it cannot be a better time, because gas prices are quite firm at this point.

“I believe that it is a very good time for us to take advantage of very high gas prices globally,” he.

Sylva said that besides taking the gas to European markets, the project would boost economic growth on the African continent.

He said it would firstly, create a corridor for development across Africa.

“Chad is also not far away from the corridor of this project.

Minister of Petroleum, Niger Republic, Mahamadou Mahamane said the countries were ready to pull their resources together to ensure that the project was achieved.

Mahamane underscored the need to get the project going, saying it would promote regional cooperation as well as earn revenue for the countries.

In an address, the Algerian Minister of Energy and Mines, Mohamed Arkab, said the reactivation of the project would boost the economic development of the countries and assist them to achieve carbon neutrality in line with the global energy transition.

Arkab recalled that a meeting had been held in Niamey on Feb. 16, within the framework of the reactivation of the Trans-Saharan Gas Pipeline Project.

Highlighting the progress made by the countries, he said the declaration had been signed by the three parties and the roadmap agreed on.

He said it was indeed a tangible sign of the willingness of all of them to move further on the TSGP project, with the aim of launching the updating of its feasibility study.

“While being fully part of the project aimed at decarbonizing the oil and gas industry in short term, and at achieving carbon neutrality in the longer term, we remain convinced that a global and efficient energy transition cannot take place without the contribution of hydrocarbons.

“As such, natural gas presents itself as an energy of excellence to ensure this energy transition while ensuring the security of the supply of markets, whose demand is only increasing.

“I invite all the parties and teams to participate actively in the realization of this important project, within the required deadlines.

In another development, the Federal Government says it disbursed N86 billion for the Basic Healthcare Provision Fund (BHPF) as at June.

The Secretary of the Oversight Committee of the Federal Ministry of Health, Dr Chris Isokpunwu, made this known on Monday in Abuja at a ministerial media conference on the developments in the health sector.

According to him, about N56 billion has so far been disbursed to the states out of the amount stated.

He said that the fund, inaugurated in 2019, was meant to strengthen public health facilities.

”With those releases, more than 7,000 Primary Health Care (PHC) centers get operational funds on a quarterly basis to provide for essential medicines, transportation for vaccines and other medical consumables in the health sector.

”It also provided for human resources for health and more than 1,500 midwives have been engaged with the fund.

”It is also used to maintain the building and infrastructure and equipment in the PHCs,” he said, indicating that the goal was to ensure that there was at least one functional PHC in each of the 8,809 political wards in the country.

He also said that about 83 per cent of the target had been reached as over 7,500 PHCs had already been reached.

Isokpunwu said that the fund was established to strengthen the PHC system, provide a basic minimum package of health services for all Nigerians, especially the poor and indigents, and provide emergency medical treatment.

According to him, the basic minimum package of health services is a comprehensive package of preventive, curative, and rehabilitative provisions including education for the prevention of illnesses and the promotion of the health of Nigerians.

”As of today, 1,040 million poor and indigent Nigerians have been enrolled to have access to a basic minimum package of health services.

”This means that these people that have been enrolled in 35 out of the 36 states and the FCT now have access to free medical treatment for common ailments and even surgeries, taking care of a broad spectrum of health conditions that Nigerians may and will be exposed to.”

He, however, said because the fund was not sufficient, the target currently are the poor and indigent Nigerians who could not afford medical treatment.

He said that the goal is also to reduce the out-of-pocket expenses they incurred.

This, he said, would pull them out of poverty and contribute to the federal government’s objective of lifting 100 million Nigerians out of poverty in the next 10 years.

He said: ”750,000 of them are currently accessing the services and more than 6,500 facilities are receiving funds for the treatment of these people.”

He said that it would ensure the provision of guaranteed emergency medical treatment for all Nigerians, adding that arrangements were at an advanced stage to inaugurate it soon.

“Upon its inauguration, all Nigerians will be guaranteed in the event of an emergency that they will receive treatment at urgent care centres and for those poor and indigent ones who cannot pay, the BHPF will guarantee their payment.

”Any Nigerian that has an emergency will be treated without the question of who will pay.”

He also said that under the fund, sickle cell anemia was covered and patients with the disease would be able to access care free of charge.

On reproductive health, the Director, Family Health, Dr. Salma Kolo, said that more than 3,700 girls were saved from Female Genital Mutilation (FGM) as a result of the awareness campaign that took place in five states – Ebonyi, Imo, Oyo, Ekiti and Osun.

According to her, there are more than 200 million people, women and girls affected and living with FGM globally and out of these, more than two million are at risk in Nigeria.

She, however, said that to reverse the trend, more than 730,000 men and religious leaders and traditional leaders have been trained on the negative impact of FGM.

”The boys were also not left behind. Over 800 boys were sensitized and trained so that they could work together as partners to protect their sisters from such criminal practices that happen in our respective communities.

”So the project will also be scaled up to other parts of Nigeria, especially in the northern part.

”Jigawa and Kaduna states have been identified for this and awareness will continue to be created until we are able to totally eliminate female genital mutilation.”

She said that Nigeria remains committed to the provision of quality access to family planning commodities and services to women of reproductive age group, adolescents, and girls, including men to ensure that the nation has the right size for its families.

”So part of what was launched by the Minister of Health was the FP 2030 commitment.

This is a global commitment, of which Nigeria is part.

”The minister, in collaboration with commissioners from all the 36 states of the federation and all relevant partners, including the civil society organizations, developed a national commitment that is all-encompassing, adopting the bottom-up approach.

”So this was signed, and we are now working on a strategy for implementation.

”We have adopted the balanced scorecard approach to develop that strategy and we have already started engaging with all the key partners to ensure that it is rolled out at all levels, especially at community level.”

Kolo said that the benefit of the federal government’s commitment to the programme was that there would be provision of quality family planning commodities and services to Nigerians of reproductive age, both men and women.

She added that the nation would leverage domestic resources so that there would be sustainable financing for family planning commodities in Nigeria without over reliance on donors.

She believes that Nigeria would gradually be self-sufficient in the provision of family planning services.