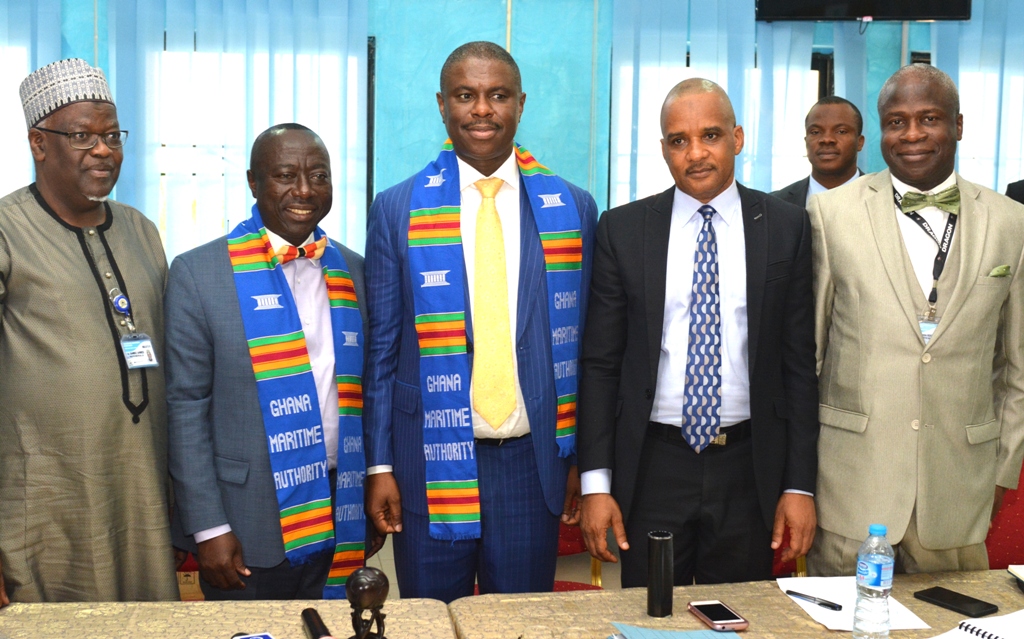 The  Nigerian Maritime Administration and Safety Agency (NIMASA) Director General, Dr. Dakuku Peterside has indicated his determination to use intra-African collaboration as a tool for harnessing sub regional natural potentials, particularly that the endowments of the seas.

Dakuku indicated this on Monday in Lagos while signing a Memorandum of Understanding (MoU) between NIMASA and the Ghanaian Maritime Authority (GMA), saying the event was in line with the overall vision of boosting regional integration, for greater capacity building.

”African countries must cooperate to solve challenges peculiar to the continent.  All maritime nations on the African continent have comparative advantage in different areas, and only collaboration will ensure that we complement each other, thus ensuring that the maritime sector contribute effectively to the growth of the continent”, highlighted Dakuku at the Nigerian Maritime Resource Development Centre in Lagos, stressing that intra-African collaboration is no doubt, a vital requirement for Africans to effectively harness the natural potentials that the Blue economy represent for the continent. 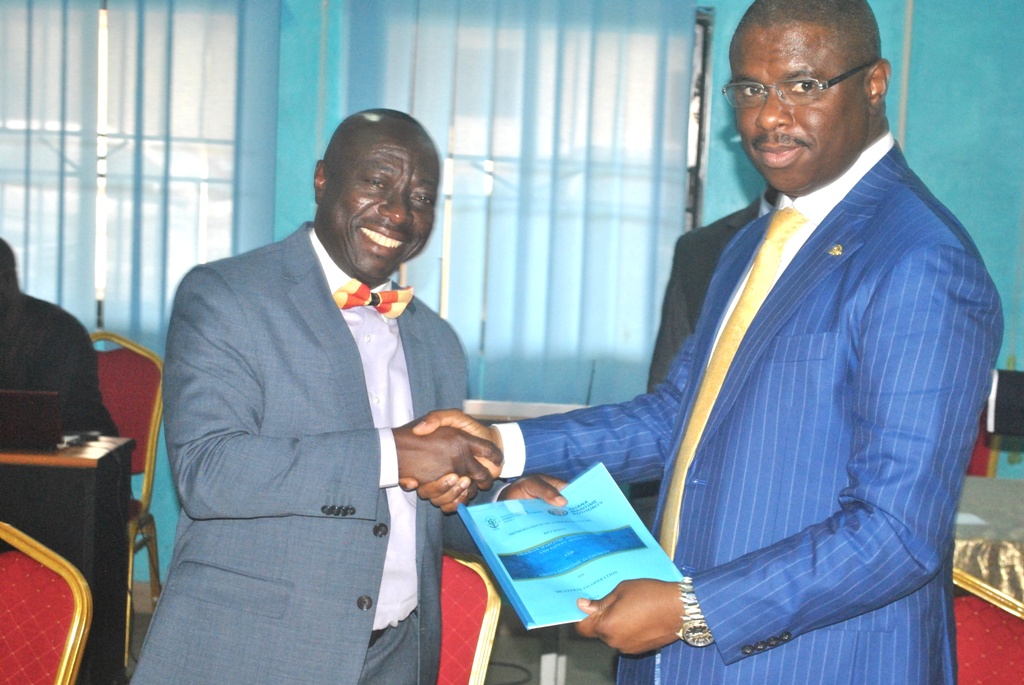 He noted that Nigeria and Ghana had a historical link in the maritime sector, adding that the African maritime sector is richly endowed to the extent that coastal and aquatic ecosystems within the continent are treasures that provide diverse and vibrant natural resources.

The NIMASA DG who is also the chairman of the Association of Heads of African Maritime Administrations commended the Management of Ghana Maritime Authority for seeking the collaboration and noted that the move will go a long way to strengthen efforts in the areas of promotion of scientific and technical cooperation; trade and movement facilitation; Exchange of information, data, knowledge and experience.

“The importance of bilateral cooperation to solve maritime environmental challenges that transcend international boundaries in our coastal and aquatic ecosystem cannot be overemphasised. We are ready, and will give our supports to tackle all associated maritime challenges that have over time impede and slow the region’s maritime sectoral progress.

We are ready to work with Ghana in all fronts within our defined and enabling capacities. NIMASA will not relent or derelict its duties and responsibilities within the contemplation of this MoU”, the DG said.

Also speaking at the event, the GMA Director General, Mr. Kwama Owusu commended NIMASA and its Management for the role of championing the growth of the maritime sector in the sub-region in particular and in Africa in general, even as he also noted that the MoU would bring about constructive and healthy competition within the West African sub-region, since Ghana would continue to cross-fertilise ideas with Nigeria in the needed areas; while learning at the same time learn from NIMASA as regards critical functional areas of maritime operations as encapsulated in the MoU. 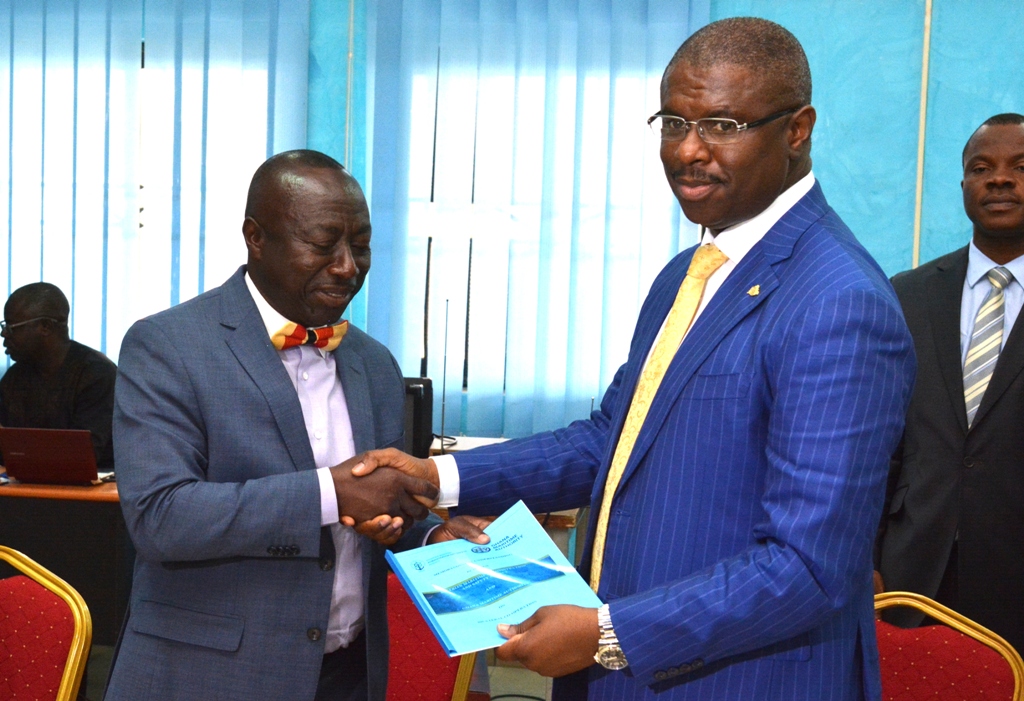 The highlight of the renewable MoU, which has a life span of four years, include Knowledge Transfer and sharing Initiative between both Agencies; Joint Capacity Building Initiative; Cabotage Enforcement Joint Study Initiative; Joint Comparative Research Initiative and Joint Efforts to combat Piracy and Terrorism Initiative.

It would be recalled that the Management of the Ghana Maritime Authority had early in the year visited the NIMASA on a fact finding mission with the aim of ascertaining areas of possible collaboration and cooperation.

In the meantime, despite the decision of the Nigerian Maritime Administration and Safety Agency (NIMASA) to challenge the judgment of a Federal High Court declaring its collection of some money from the Nigeria Liquefied Natural Gas (NLNG) Limited as illegal, the liquefied gas giant is asking for a refund of $315 million, writes EMEKA UGWUANYI.

The management of Nigeria Liquefied Natural Gas Limited (NLNG) has issued a demand notice for $315,598,823.29 judgment debt to the Nigerian Maritime Administration and Safety Agency (NIMASA).

The sum represents the payments made under protest to the Agency by the NLNG since 2013, as well as direct and shipping losses incurred by NLNG due to the initial two-day blockade of the Bonny Channel by NIMASA in May 2013.

The General Manager, External Relations, Kudo Eresia-Eke,  said the development followed the decision on October 3, 2017 by the Federal High Court, Lagos that NLNG was not liable to make the said payments to NIMASA, and that all such payments already made by NLNG to NIMASA should be refunded forthwith.

The court, presided over by Justice M. B. Idris, held that NIMASA was wrong in blockading the Bonny Channel for the purpose of enforcing the payments against NLNG.

Eresia-Eke said: “The Federal High Court ruling transcends being simply a legal victory for NLNG. It must be viewed for what it really is: A resounding message from Nigeria to the global investment community. The message is that we can be trusted to keep our sovereign word and that Nigeria remains open for business, partnership and investments.”

NIMASA had alleged that NLNG was liable to pay  three percent gross freight  levy on its international inbound and outbound cargo, Sea Protection Levy, two percent cabotage surcharge as well as other sundry claims, all of  which NLNG disputed.

NLNG, in 2013 filed the case at the Federal High Court against NIMASA, seeking a judicial determination on, among other things, the legality or otherwise of the levies sought to be imposed on NLNG by NIMASA, and the consequent blockade of the Bonny Channel by NIMASA and its agent as a result of the dispute.

NLNG had also sought a Court Order restraining NIMASA from further blockade of the Channel.   An Interim Injunction granted in favour of NLNG by the Federal High Court was disobeyed by NIMASA, which again blockaded the Bonny Channel over a three week period while the matter was pending, thereby preventing NLNG vessels and other vessels doing business with the Company from entry and exit through the Channel.

On the day the judgment was given, NIMASA Director-General Dr Dakuku Peterside expressed the agency’s dissatisfaction with the decision of Justice Idris.

A statement by the agency’s spokesman, Isichei Osamgbi, said: “Consequently, Dr Dakuku has stated the management’s intention to appeal the judgment. The agency’s legal team are waiting for the certified true copy of the judgment, which we will study and respond as appropriate.”

The problem predated Peterside. It started in 2013 when the agency requested the NLNG to pay all statutory levies accruable to the agency, including the 3% levy on gross freight on inbound and outbound international cargo, 2% Cabotage levy and Sea Protection levy. NIMASA insisted that the NLNG was not exempted from payments of statutory levies after its tax holiday ended.

“NIMASA has portfolios of statutory revenues that it collects from shipping companies/ship operators, manning agents and seafarers. This the agency pays into the coffers of the government. It is within these funds generated that the agency uses to develop and police the maritime sector. NIMASA does not receive any government allocations,” said the agency.

Six years before the crisis blew open in 2013, the leadership of NIMASA ‘pursued’ the NLNG Limited for levies, which Africa’s premier LNG company saw no legal basis for.

In June 2013, after NIMASA blockaded its vessels from taking liquefied gas to its customers overseas, NLNG ran to the court again.

Before that, the Federal Government set up a mediation committee in May 2013, with the then Attorney-General of the Federation (AGF) and Minister of Justice Adoke Bello as the panel’s legal adviser. An agreement was reached that NLNG should pay the outstanding levies from September 2009.

It paid $20 million in protest and approached the court for a judicial interpretation of the dispute.

On September 19, 2013, the court started a process for the ‘proper interpretation’ the relevant sections of the enabling laws of both parties.

The second 2013 blockade by the waterways police led to the NLNG agreeing to pay NIMASA $140 million. It said the payment was in protest. The filings in court make interesting reading for anyone interested in the uses and abuses of power, the dilemmas caused by ambiguous laws and the tactics parties have been compelled to employ to outsmart each other. They also show the need for laws not to be written in ambiguous language.

The NLNG/NIMASA saga began in 2007 when the maritime regulator expected NLNG to start paying levies. By NIMASA’s calculation, NLNG’s tax holiday lapsed in 2007. NLNG saw no sense in NIMASA’s claim. As far as it is concerned, the Act setting it up exempts it from NIMASA’s levies. NIMASA says it has always acted in line with its enabling law.

Section 15(a) of the NIMASA Act 2007 stipulates: “The agency shall be funded by monies accruing to the agency from the following sources: 3 per cent of gross freight on all international inbound and outbound cargo from ships or shipping companies operating in Nigeria to be collected and paid over to the agency to meet its operational cost.”

Section 2(2) of the Act states that exemptions are only granted to “war ships and military patrol ships”.

NIMASA says NLNG vessels do not fall within those exempted from the levies and that the tax holiday granted it was time-bound.

The NLNG Act 2004 predates the NIMASA Act 2007. Section 7(7) of the NLNG Act 2004 states: “No export duties, taxes, or other duties, levies, charges, or imposts of a similar nature shall be payable or imposed on the exports of liquefied natural gas or other hydrocarbons produced by the company.”

To add to the confusion, paragraph 3, Schedule 2 of the NLNG Act states: “Neither the company nor its stakeholders shall in any way be subject to new laws, regulations, taxes, duties, imposts or charges of whatever nature which are not applicable generally to companies incorporated in Nigeria.”

Yet, according to NIMASA Act 2007, it has right to collect levies from ships and small ships “registered in Nigeria and also to ships, small ships and crafts flying a foreign flag in the exclusive economic zone, territorial and inland seas, inland waterways and in the ports of the Federal Republic of Nigeria”.

It also collects levies from shipping companies/ship operators, manning agents and seafarers on the government’s behalf. It is with these funds generated that the agency develops and polices the maritime sector. NIMASA does not receive any government allocations, said a source.

The incentives granted NLNG, said NIMASA, are not meant to be in perpetuity. The agency points at Section 2 of the NLNG Act which limits the tax holiday of the company to 10 years or when the cumulative average sales price of the liquefied natural gas reaches $3 in million metric British Thermal Units (MMBTU).

NIMASA said its market intelligence shows that as at January 2004, which was the fifth anniversary of the production of the NLNG, the milestone for the expiration of the exemption period had been surpassed by 200 per cent.

In a statement by its General Manager, External Relations Kudo Eresia-Eke, the then NLNG Managing Director, Mr. Babs Omotowa, said: “We feel we have no other option than to now make these payments under protest. In doing this, we have taken into account the overriding national interest; in particular to stem the huge financial and reputation loss the country has suffered as a reliable LNG supplier, a destination for foreign investment and a nation of the rule of law.

“NLNG still strongly believes that it has a very strong case to be exempted from the NIMASA levies under the terms of the NLNG Act and will continue with its substantive case in court to obtain a judicial determination of whether or not such levies are due to be paid. It is for this reason that the payments that NLNG is making will be made on an ‘under protest’ basis.