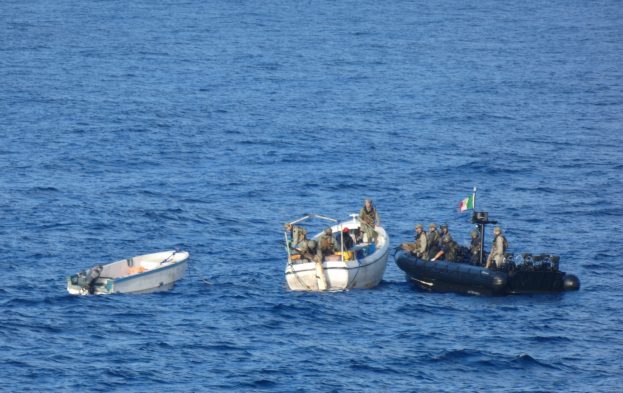 The men were detained by the crew of EU NAVFOR’s flagship ITS Virginio Fasan following attacks on a 52,000 tonne containership MV Ever Dynamic and a fishing vessel Galerna III, which took place on November 17 and 18 in the Southern Somali Basin.

During the incidents, it was alleged that a number of rocket propelled grenades were fired against the container ship. The six Somalis formed the crew of a motor whaler, supposedly acting as mother ship.

EU NAVFOR informed, citing the Seychellois Attorney General, that the men will now face legal prosecution before the court and if convicted, the suspected pirates could face up to 30 years’ imprisonment in a Seychelles detention facility.

This case follows other piracy convictions such as the Tribal Kat case in 2016, when a French court sentenced six Somalis to between 6 and 15 years after they were found guilty of attacking the yacht and the murder of its French skipper, in an incident which took place back in September 2011.

Meanwhile, nine of the 12 trades saw a decrease in schedule reliability from October 2017 to November 2017, intelligence provider CargoSmart informed.

The North America-Oceania trade, which had the highest reliability in previous months, experienced the largest decrement in reliability, decreasing by 24.8% from 86.2% in October 2017 to 61.4% in November 2017.

The Europe-South America trade had the highest reliability with 83.8% in November 2017.