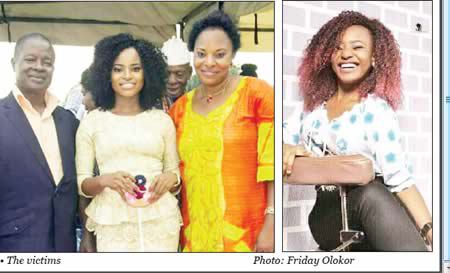 The Igbo community in Jos, Plateau State, have been thrown into mourning following an auto crash involving a family of four who were travelling for a wedding in Anambra State.

The victims were indigenes of Ufuma in the Orumba North Local Government Area of Anambra State.

Although details of the crash were still sketchy, PUNCH METRO learnt that the four victims, out of eight members of a family, were killed when a vehicle in which they were travelling had an accident between Aleyede and Oturkpo in Benue State.

The victims are a patent medicine dealer, Simon Onwubalili; his wife, Ifeoma, who was a staff member of the National Examination Council; a graduate of Medicine awaiting induction into the NMA, Dr Ijeoma Onwubalili; and her sister, Gracious  Onwubalili.

However, the driver of the car with number plate, Abuja ABC 105 PH, and one of the family members, Marvel Onwubalili, survived the accident.

They were said to be going for Ijeoma’s traditional wedding scheduled for December 31, 2017, when the accident occurred.

It was also gathered that the induction of Ijeoma in the University of Nigeria, Nsukka, was to take place in the first quarter of 2018.

The first son of the family, Onyedika Onwubalili, confirmed the incident, saying “Yes, it is true,” but gave no further details.

Another family member, who did not want to be named, said the incident happened on Sunday.

He said, “Simon Onwubalili and his family left Jos on Saturday en route to their hometown of Enugu Abor in Ofuma, in the Orumba North Local Government Area of Anambra State. Their chauffeur-driven Toyota Highlander somersaulted on the way. The man had a thanksgiving service in church penultimate Sunday and shared the invitation cards of her daughter’s induction into the NMA.

“They hired a driver to take them home where Ijeoma, who recently graduated as a medical doctor, was to hold her traditional marriage on December 31, 2017.

“Unfortunately, they couldn’t make it as the journey was cut short somewhere along Oturkpo-Enugu Road. The driver was speeding and suddenly found himself in the path of an oncoming vehicle. In an attempt to avoid the vehicle, the car somersaulted several times and they died.”

When contacted, the spokesperson for the Benue State Police Command, Moses Yamu, said he would get back to our correspondent.

But he had yet to do so as of press time.

In the meantime, four persons were feared dead in an accident involving a Ford bus and a Mack trailer on Wednesday morning on the Sagamu-Ijebu Ode Expressway.

Oladele said that the accident happened at 4:45 a.m., near the Ijebu Ode Toll Gate.

The sector commander said that the accident was caused by loss of control by the driver of the black truck with registration number XB 111 LSD.

According to him, the loss of control led to a collision of the truck with the white bus marked LSD 766 XS.

“The accident occurred at about 4:45a.m. near Ijebu Ode Toll Gate, leading to the death of four people trapped in the bus conveying passengers and woods.

“The crash is suspected to have been caused by loss of control, when a truck which had earlier parked, suddenly attempted to join the road corridor.

“A Mack truck moving in the same direction, in an attempt to avoid colliding with the truck entering the road, swerved away from the slow lane to the fast lane.

“The bus travelling behind on the fast lane was too fast and could not stop but run into the truck that swerved from slow to the fast lane.

“The crash resulted in the death of the four passengers in the bus,’’ he said.

Oladele said that the corpses of the victims had been taken to the Ijebu Ode General Hospital Mortuary, adding that obstructions at the accident scene had been cleared.

He urged motorists to drive cautiously and obey all traffic rules and regulations.