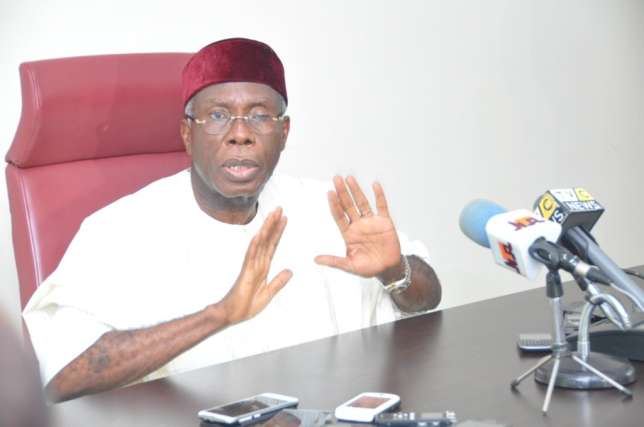 The Minister of Agriculture, Chief Audu Ogbe scored his Ministry beyond normal as he told newsmen on Thursday that the Agric Ministry under his watch has transformed Nigeria from an import-based country, to a highly export-driven nation, due to the strides made in agriculture.

Some Nigerians were however unimpressed, as they insisted that the gains Ogbe was celebrating, which should percolate into relatively cheaper food, was yet to trickle down to the masses.

The Minister indicated his view while briefing State House correspondents on the outcome of the National Economic Council (NEC) meeting presided over by the Vice President, Yemi Osinbajo.

He said that his ministry briefed NEC on the progress made in the agriculture sector where virtually every state had keyed into the Federal Government agricultural revolution agenda in which it realised 35 million dollars in 2017 from export of hibiscus flower produced in Jigawa alone.

“We just did a review of progress made in agriculture so far, a presentation by our ministry on the efforts we have been making and the contribution of agriculture to GDP.

“The job creation exercise; the reduction in imports and the fact that in the last one year and half agricultural exports have grown by 150 per cent.

“We are finally a nation that imports less than we export. That has not been the case for nearly three decades.

“So we now export more than we import which is why the foreign reserve is getting healthier by the week,’’ he told newsman who fully understood that the Naira is still being harassed by the Dollar at over N360, in spite of an aggressive intervention policy, of the Central Bank of Nigeria, to salvage the nation’s currency.

Ogbe disclosed that the meeting also looked at the advancement made in grains, legumes and tubers production and those areas where new crops have come into existence such as the Hibiscus from Jigawa.

He said the government was looking at possibilities of exports of soya beans after meeting national demands and taking advantage of the little disputes between some big nations regarding trade on the crop.

The minister also listed sorghum and other value additions as crops Nigeria was looking at exporting.

“We heard the efforts of many states like Akwa Ibom that is going heavily into Cocoanut oil production and planting 11,000 hectares.

“We heard what is going in Ogun, Anambra, Jigawa, Kebbi, Kaduna and virtually every state of the federation keying into this programme of agricultural development.

“We are very happy and excited that finally agriculture has come to take its place and we hope that in the nearest future, agriculture will be the mainstay of this country’s economy,’’ he added.

The Minister restated the position of Nigeria at the ECOWAS meeting on herdsmen/farmers’ conflict that the country would not abide by the regional protocol to allow men and animals to move freely across our borders.

According to him, NEC has been briefed that some of the herdsmen killed in Benue State resembled Mauritanians coming into the state for an umpteenth time.

“We cannot allow this matter to continue,’’ Ogbe stated.

The minister stated that the killings in Benue were no longer herdsmen/farmers’ conflict but an extension of Boko Haram insurgency.

He said that entering a church and killing priests and worshippers in the morning without coming with cattle showed that something sinister was going on.

He said that government was sending more reinforcement to trace the killers in the bush to bring them to book.

Ogbe explained that the use of cattle colonies was a biological expression used in agriculture to describe a cluster of ranches, adding that it was not a territory of occupation by natives.

“If you have a cluster of animals of one species you call them a colony. We call them colonies because nobody in this country has the money to do a stand-alone ranch even of just 20 cows because it is too costly.

“We told them in West Africa that every country should control its cattle to prevent this movement while we try and deal with ours because if we were dealing with local herdsmen, this problem will not be where it is now.’’

Meanwhile, the Deputy Governor of Lagos, Mrs Idiat Adebule, said that as at April 23, the excess crude account had a balance of 1.83 trillion dollars, stabilisation fund had 14.23 million dollars and national reserve development fund had N124.91 million.

Adebule added that on the budget support to states, the 35 states in the scheme had so far collected N1.3 trillion since the beginning of the scheme and also collected N1.1 billion recently.