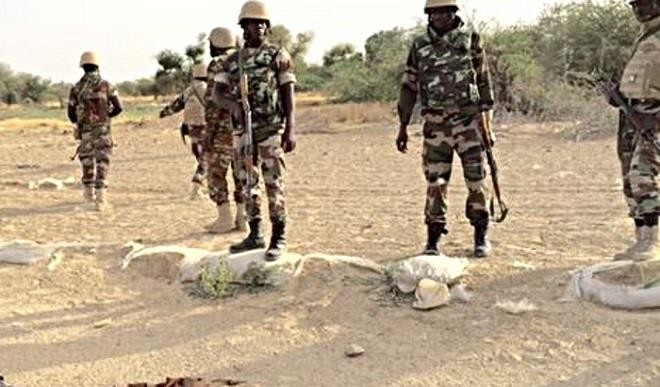 The Nigerian Army has destroyed 500 drums of adulterated diesel and two cars seized from smugglers in Jebs Community in the Calabar South Local Government Area of Cross River.

Speaking to newsmen after the destruction, carried out on Friday in Calabar, the Commander of Operation Delta Safe, Sector 4, Col. B.A. Amakor, said the diesel was smuggled from neighbouring states into Cross River.

Amakor said the smugglers absconded on sighting the army, leaving drums of diesel and two vehicles behind.

“We have 500 drums of diesel which is worth millions of naira and they are being destroyed alongside two vehicles which were used to perpetrate the act.

“Some suspects were arrested and after preliminary investigations, some of the people who were used as labourers to offload the products were apprehended and we have handed them over to the relevant agencies for prosecution.

“We are reaching out to locals through community and youth leaders to help us with information and cooperate with the security agencies to report these people when they are seen.

“The challenges we are facing apart from the issue of logistics is the challenge of the locals who are not ready to divulge information.’’

The commander said that Operation Delta Safe was doing its best to safeguard Cross River, particularly the waterways to stop smugglers from carrying out their illegal activities.

On kidnapping, he said that Operation Delta Safe was stepping up efforts and had in the past two weeks arrested over 10 suspected kidnappers.

“We raided their camps. Some of them were killed in the process and some got away with gunshot wounds.

“We are still on their trail. We are assuring members of the public that kidnappers will not find a resting place in Cross River State.”

Amakor, however, called on the Cross River Government to support Operation Delta Safe in its effort to make the state safer.

In the meantime, the police in Lagos have arrested a woman in whose deep freezer the dead body of a six-year-old boy was allegedly found at Alapere in Ketu, near Lagos.

The spokesman of the Lagos State Police Command, DSP. Bala Elkana, confirmed the arrest on Friday while speaking with crime correspondents.

He said that the dead body had been deposited at the mortuary, while investigations had commenced.

According to Elkana, on April 23 at 8.30 p.m., one Eunice Akinsohun of No. 9, Oyedele Str. Alapere Ketu, reported that her six- year old son, Treasure Akinsohun was missing since 9 a.m.

He said the corpse of the boy was found inside a freezer in her neighbour’s shop, one Patience Odowo at No. 12, Orisigun Str. Alapere, leading to Odowo’s arrest.

It was learnt that Treasure and his mother lived in Ikorodu and had gone to Ketu to celebrate the Easter holidays with his mother’s younger sister.

It was also learnt that Treasure and other kids in his aunt’s compound were playing when he suddenly disappeared.

His body was later found inside a freezer at Orisigun Street, five streets from his mother’s younger sister’s house.

The bereaved mother told reporters that she noticed her son was not among the other children that were playing in the compound.

She said that when she asked for his whereabouts, the other children could not give an answer, prompting her to raise alarm.

She said she immediately went to the Alapare Police Station to report her missing son.

“I also called my husband on the phone to inform him of the development. Before I got back home, a crowd had gathered at my sister’s house at Alapere to help in the search for my son.

“Throughout that day we couldn’t locate the exact place where he was. When my husband eventually arrived, he also tried his best with my sister’s husband and some elders in the community.

“My son was still not found. That was how we went back to Ikorodu that night with tears and anguish,” she said crying.

Akinsohun said it was when she and her husband were on their way back to Alapere from Ikorodu that they received a phone call that her son had been found in a woman’s freezer at Orisigun Street.

“Immediately I saw the corpse of my son, I fainted. I was later revived at the hospital. What surprised me was how my son got into a freezer at another street.

“I still don’t understand how he got into the freezer as I speak with you. But it is left for the police to investigate,” she said.

The father of the boy, Mr Ojo Akinsohun, said he was preparing to go out when he received a phone call from his wife that their son was missing.

“I heard that the night my son was missing, the daughter of the freezer’s owner was sent to bring sachet water from the freezer, but she didn’t find the boy inside. I am surprised how the boy got into the freezer.

“I want police to investigate it and get to the root of the matter. I can’t sit down and allow my son to die in vain,” he said.