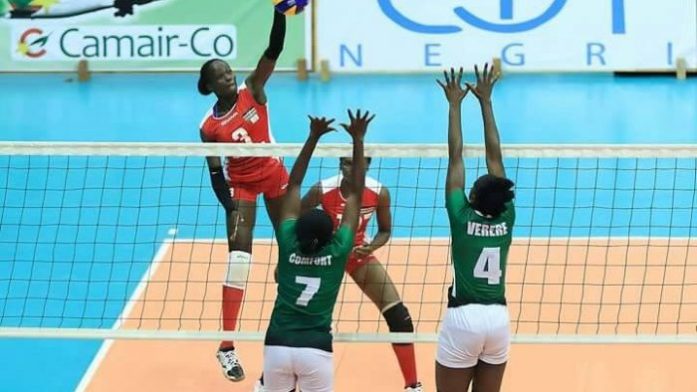 Team Nigeria began the game with a high team spirit to record their first win in their third match at the Popasy hall in Yaounde.

Nigeria will now meet Kenya in their last group match on Thursday.

The 2020 Olympic qualifiers which started on Sunday is expected to end on Thursday.

In another development, Manchester City manager Pep Guardiola needed only 15 minutes in training to get the tactical changes which led to Tuesday’s 3-1 win over Manchester United, playmaker Kevin De Bruyne said.

The 3-1 win was in the League Cup semi-finals on Tuesday.

Guardiola opted to play without a recognised striker at Old Trafford.

“We did 15 minutes on it (tactics) in the morning. That’s about it,” De Bruyne told the British media on the plan to play with a
`false nine’ in the first leg.

“We didn’t train that but it’s not like we never did it before —– we did it sometimes against teams that prefer to play man-against-man; Cardiff City, Manchester United, in Barcelona away we did it the first year with Pep… we’ve done it a couple of times.”

In spite of Silva’s unfamiliarity in the position, he scored the opening goal in the 17th minute before Riyad Mahrez doubled the lead and Manchester United’s Andreas Pereira scored an own goal.

Manchester United pulled one back in the 70th minute through striker Marcus Rashford to give themselves a chance in the tie.

“With Bernardo dropping (back) it’s four against three in midfield, so they have to choose what they do,” De Bruyne said.

“If they put their defender up there’s more space behind and if not Bernardo’s going to be free. That’s what we tried to do. I think overall we played well.

“The second half they tried to put a bit more pressure on us and we made one mistake and they scored from it.”

Manchester City, who succumbed to Manchester United’s counter-attacking might in a 2-1 English Premier League loss at the Etihad Stadium in December, host their neighbours in the second leg of the semi-final on Jan. 29.