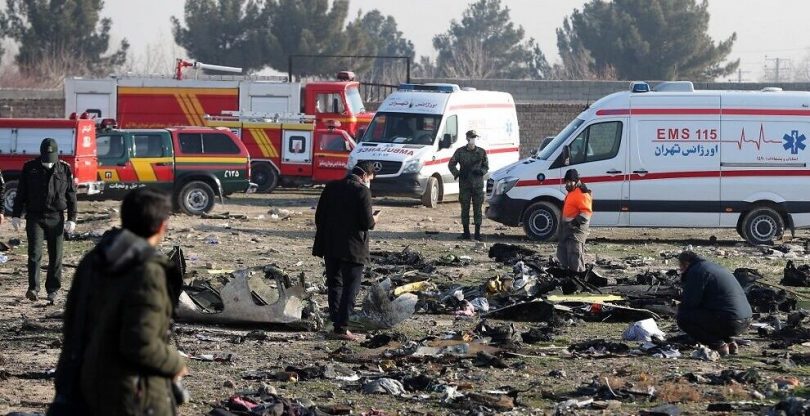 …As Algeria, Italy urge for cease-fire in Libya***

Ukraine on Thursday outlined four potential scenarios to explain the deadly crash of one of its airliners in Iran, including a missile strike and terrorism.

Iranian investigators said the plane was on fire before it fell to the ground.

Kiev said its investigators wanted to search the site of Wednesday’s crash southwest of Tehran for possible debris of a Russian-made missile used by Iran’s military.

The Ukrainian International Airlines Boeing 737-800, flying to Kiev and carrying mostly Iranians and Iranian-Canadians, crashed shortly after taking off from Tehran’s Imam Khomeini airport, killing all 176 people on board.

The Iranian report cited witnesses on the ground and in a passing aircraft flying at a high altitude as saying the plane was on fire while in the air.

It said that the three-year-old airliner, which had its last scheduled maintenance on Monday, encountered a technical problem shortly after take-off and started to head toward a nearby airport before it crashed.

The report said that there was no radio communication from the pilot and that the aircraft disappeared from radar at 8,000 feet (2,440 m).

According to the report, it is so far unclear if any technical issue could be related to a maintenance fault or defective part.

The disaster puts a renewed spotlight on Boeing, which faces a safety crisis over a different type of 737, though the plane that crashed in Iran does not have the feature thought to have caused crashes of the grounded 737 MAX.

The Iranian report referred to the crash as an accident.

Investigations into airliner crashes are complex, requiring regulators, experts and companies across several international jurisdictions to work together.

It can take months to fully determine the cause and issue an initial report within 24 hours is rare.

A Canadian security source told Reuters there was evidence one of the engines had overheated.

The crash happened hours after Iran launched missile attacks on U.S.-led forces in Iraq, leading some to speculate that the plane may have been hit.

“The initial assessment of Western intelligence agencies was that the plane had suffered a technical malfunction and had not been brought down by a missile,’’ five security sources, three Americans, one European and the Canadian, who asked not to be named, told Reuters.

In the meantime, Algerian Foreign Minister Sabri Boukadoum said on Thursday that Algiers and Rome shared convergent views over the necessity to reach a cease-fire in war-ridden Libya.

“Coordination between Algeria and Italy on Libya is very good,’’ Boukadoum told a joint news conference attended by his Italian counterpart Luigi Di Maio in Algiers.

According to him, a political solution is the most appropriate to Libya.

He further noted that negotiations between the conflicting Libyan parties “are necessary at this time because they are the first concerned with what is happening inside their own nation.”

For his part, Di Maio said that all the countries he visited, including Turkey, Egypt, Belgium and Algeria, “agree on the necessity of reaching a peaceful solution and a cease-fire in Libya.”

He stressed that “everyone agrees on the need to reach a solution that guarantees stability in the region.”

Algeria, which shares 1,000 km-long border with Libya, fears the fallout of any potential “proxy war” in Libya between influential international powers.

Report says Algeria tends to stop the dangerous scenario on its national security, as it has deployed thousands of its troops to the border with Libya.

Libya has been hit by civil war since the fall of former leader Muammar Gaddafi’s regime in 2011.

-Reuters with additional reports from Xinhua