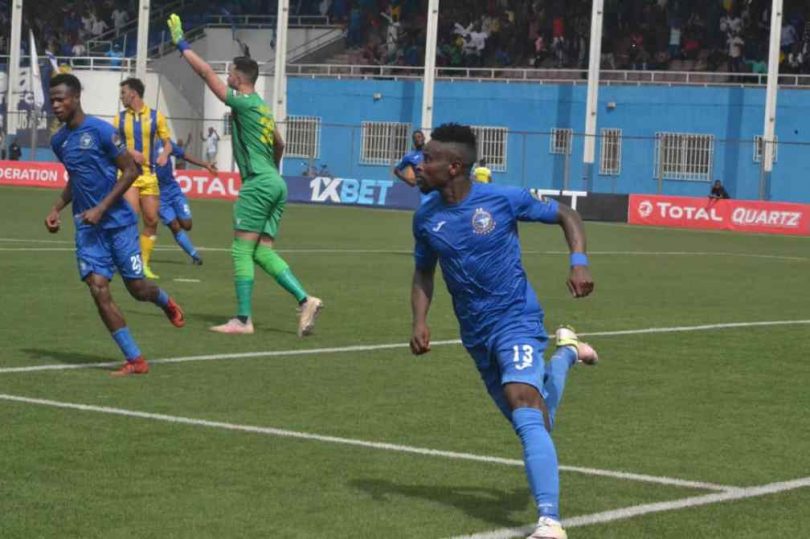 The match played at the Enyimba International Stadium, Dimgba opened scoring in the 15th minute.

He nodded home Reuben Bala’s cross at the near post.

The former Sunshine Stars and Warri Wolves winger then set up Victor Mbaoma for Enyimba’s second goal of the game in the 35th minute.

Dimgba added the third for the hosts a minute later, as he chipped the ball into the net after he was set up by Cyril Olisema.

Enyimba got their fourth goal in the 76th minute, with Dimgba nodding home substitute Stanley Okorom’s cross for his third of the day.

Abdelhak Kadiri scored a consolation goal for the visitors a minute from time.

The result ensured Enyimba moved to the second position in Group D, with six points from four matches.

Morocco’s Hassania Agadir who will face San Pedro of Cote d’Ivoire in the group’s other game later on Sunday occupy top spot with seven points.

The Peoples Elephants will host Hassania Agadir in their next game in the competition on Jan. 26 at the Enyimba International Stadium.

In the meantime, Sergio Aguero became the most prolific foreign goalscorer in English Premier League (EPL) history with a hat-trick as Manchester City thrashed Aston Villa 6-1 to reclaim second place on Sunday.

The Argentine striker struck Manchester City’s third, fifth and sixth goals at Villa Park to take his league tally to 177.

This is two more than what Frenchman Thierry Henry managed for Arsenal, and is fourth on the all-time list alongside Frank Lampard.

They also trimmed Liverpool’s lead to 14 points, although Liverpool have played a game less.

Mahrez’s dribble and shot opened the scoring in the 18th minute and the Algerian struck again six minutes later.

Champions Manchester City’s slick football was too much for Aston Villa who had dropped into the relegation zone before kick-off, after Watford’s win at Bournemouth.

Aguero’s fierce strike from outside the area made it 3-0 in the 28th minute, before Jesus tapped in a fourth on the stroke of half-time after a stunning pass by Kevin De Bruyne.

A razor-sharp Aguero moved clear of Henry with a neat finish in the 58th minute.

He continued to torment a sorry home side by completing his 12th Premier League hat-trick in the 81st minute.

Aston Villa, who have fallen to third from bottom, did not manage a shot on target until they were awarded a stoppage-time penalty kick that was tucked away by Anwar El Ghazi.