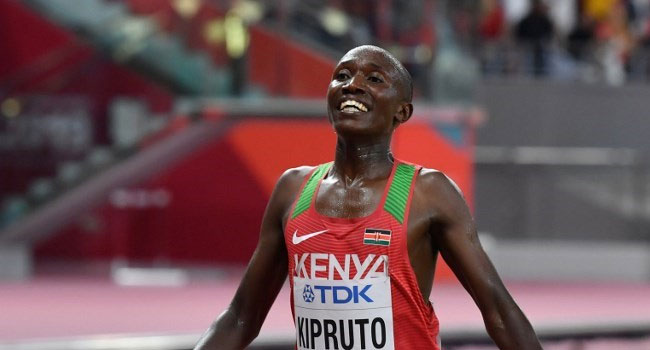 …As Iran’s only female Olympic medalist bolts via defection***

A statement made available by the World Athletics Media department on Sunday added that Kipruto’s half-way split of 13 mins 18 secs was also an improvement on the 5km world record.

It pointed out that in spite of running on his own for the entire second half, Kipruto increased his pace and clocked 2 mins 37 secs for the sixth kilometre.

After a slightly slower seventh kilometre of 2:40, the world under 10,000m champion ramped up his speed again for the eighth kilometre, which he covered in 2:36.

It said that having passed 8km in 20:11, it became clear that Kipruto was on course to improve Joshua Cheptegei’s yet-to-be ratified world record of 26:38.

It read that Cheptegei set the record six weeks ago in the same city, albeit on a different course.

The statement read that only the legendary Ethiopian duo Kenenisa Bekele (26:17.53) and Haile Gebrselassie (26:22.75) have recorded faster times on the track.

The statement added that the ecstatic Kipruto, who is coached by Colm O’Connell said afterwards that “I’m over the moon,”.

“When I clocked 26:46 in Prague in 2018, I set myself the target of breaking the world 10km record and today my dream came true.

“I’m very thankful to the organisers for relying on me to set the record and to the city and the people of Valencia for treating me so well and for their support throughout the race.”

In the meantime, the Iran’s only female Olympic medalist has said on social media she had left her homeland.

Taekwondo champion Kimia Alizadeh said this was because she had had enough of being used by Iranian authorities as a propaganda tool.

She won a bronze medal at the 2016 Rio Olympics.

She wrote on an account she has used for some time, but it was not immediately possible to verify her location.

“No one has invited me to Europe and I haven’t been given a tempting offer.

“But I accept the pain and hardship of homesickness because I didn’t want to be part of hypocrisy, lies, injustice and flattery,” she said.

In a reaction, Mahin Farhadizadeh, a deputy Iranian sports minister, said: “I have not read Kimia’s post.

“But as far as I know she always wanted to continue her studies in physiotherapy,” the semi-official ISNA news agency reported.

Alizadeh said the Islamic Republic’s authorities had attributed her success to their management and the fact that she wore the Islamic veil, which is obligatory in Iran.

“None of us matter for them, we are just tools.”

She said that while the government exploited her medals politically, officials would humiliate her with remarks such as “It is not virtuous for a woman to stretch her legs!”

Alizadeh said at the time of her medal in the 57kg category that it had made her happy for Iranian girls.

On Sunday she appeared torn by her decision.

In the past week, 176 people, many Iranians with dual citizenship, were killed when the Iranian military mistakenly shot a Ukrainian airliner down.

Also, at least 56 died in a stampede at the funeral for an Iranian military commander killed by a U.S. air strike.

Alizadeh is the third top Iranian sports person to stop representing the country in recent months.

In December, Iran’s Chess Federation said top rated chess champion Alireza Firouzja had decided not to play for Iran over its informal ban on competing against Israeli players.

This was after he ignored orders from his national federation to pull out of fights to avoid a potential final meeting with an Israeli.