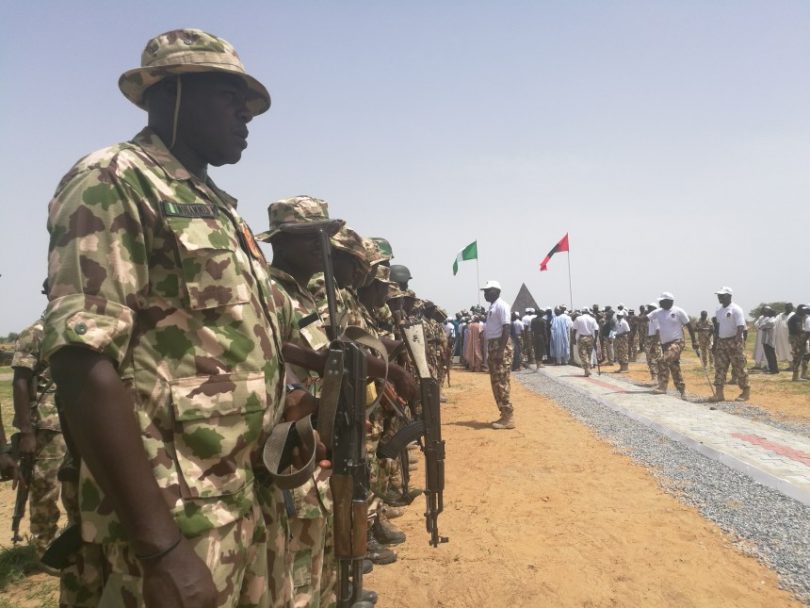 Nigerians rose in unison on Wednesday to remember the nation’s fallen heroes and the sacrifices they made to sustain national unity as the country marked the 2020 Armed Forces Remembrance Day.

In Ibadan, Gov. Seyi Makinde of Oyo State said the contributions of the fallen heroes required appreciation and urged Nigerians to care for those injured in the course of carrying out their service to the nation.

Also speaking with newsmen, Mr Michael Fajimi, the state Chairman of the Nigerian Legion, solicited the assistance of the Federal Government and states for the dependants of the fallen heroes.

Fajimi said that such assistance would go a long way in providing succour for the dependants.

The News Agency of Nigeria (NAN) reports that highlights of the occasion included laying of wreaths by Makinde and  the General Officer Commanding, 2 Division, Nigeria Army, Maj.-Gen AB Omozoje among others.

In Abeokuta, Gov. Dapo Abiodun of Ogun also urged Nigerians to regularly remember and touch the lives of families left behind by fallen heroes rather than wait till every Armed Forces Remembrance Day celebration.

He spoke shortly after the laying of wreath during the 2020 Armed Forces Remembrance Day celebration held at the Arcade Ground, Oke Mosan,  Abeokuta.

The governor told newsmen that it was important to celebrate the people who had laboured for the unity of the country and to ensure that their efforts were not in vain.

“Most times, many of us hardly appreciate our heroes because we see them as soldiers who have committed themselves to be in the military and many times, these men have become casualties in the line of duty.

“These are men and women that have spouses, children. There were lamentations from the widows of these fallen heroes.

“I want to enjoin all of us to take our time every day and think about these people who have laboured for the unity of this country.

“We should not wait till next year 2021, look around ourselves,  look around our neighborhood and find that orphan,  that widow , widower whose mother and father have sacrificed their lives in the defence of this country.

“Find a way to touch and impact on them, that will be a way of remembering them and not waiting for the Armed Forces Remembrance Day,” he said.

In Ilorin, Gov. Abdulrahman Abdulrazaq of Kwara also called for better care and attention to the welfare of families left behind by fallen heroes, saying that was the way to show gratitude for their selfless service to the country.

“For the living and families of the fallen heroes, we have to continue to pray for them, support them, engage them and thank them for their service to Nigeria,” he said.

He spoke shortly after laying the wreath at the 2020 Armed Forces Remembrance Day celebration in Ilorin, the state capital.

Abdulrazaq commended the departed heroes for their selfless service in protecting the territorial integrity of the country and strengthening the unity, peace and security of the nation.

He also pledged more support to the security agencies to improve safety of lives and properties in the state.

“Our security agencies are doing exceedingly well in performing their mandate and we have to support them to perform their mandate of ensuring security in the state and Nigeria at large,” Abdulrazaq added.

Abdulrazaq  promised more support for the Nigerian Legion’s outreaches and other programmes in the state.

In Akure, Gov. Oluwarotimi Akeredolu of Ondo State lauded the efforts of the armed forces in ensuring security in the state and the country in general.

Akeredolu, who gave the commendation in Akure during the Armed Forces Remembrance Day celebration, recalled that the armed forces ensured that crime in Ondo State was checked, especially before, during and after the Yuletide.

The governor further identified with the widows of the fallen heroes and assured them of continuous support in their endeavours.

Also speaking with newsmen, retired Col. Olu Apata, Chairman, Nigerian Legion, Ondo State, commended the state government for paying  the pension of ex servicemen as and when due.

NAN reports that 64 widows of departed soldiers were presented with money under an empowerment initiative.

In Osogbo, Gov. Gboyega Oyetola of Osun said the only way Nigerians could appreciate the sacrifices of the fallen heroes and veterans was for all to remain united in love and peace.

Oyetola said all citizens must face the future with faith and hope by working for the peace of the nation to achieve the desired progress and development.

The governor spoke at the Armed Forces Remembrance Day celebration in Osogbo.

He urged Nigerians,irrespective of their tribe, to engage in acts that would deliver a strong, unified and prosperous Nigeria.

”Let us all continue to scale up intervention in loving memory of our fallen compatriots and in the service of our veterans.

“I commend the armed forces for strategising day and night to fight insurgency and terrorism and keep the nation safe.

”Their commitment to the security and safety of the nation gives the confidence that one and indivisible Nigeria is possible and non-negotiable,” Oyetola said.

The governor explained that his administration had been supportive of the veterans and the families of the fallen heroes through implementation of improved welfare policies and programmes.

”We all have a responsibility as a nation and as a people to continue to take care of the legionnaires and the families of the fallen heroes.

“Taking care of their welfare is the measure of our compassion and the volume and quality of our appreciation as beneficiaries of their sacrifices.

”These acts of reciprocation and compassion are encouragement and motivation for our gallant soldiers who are currently engaged in fighting insurgency, peace support and internal security operations across the world.

”Each year since we came into power, we have rallied round our fallen heroes and provided for their needs.

“Our policies and programmes have been directed at them and the people through adequate, equitable and qualitative service delivery,” the governor said.

Earlier, the Chairman of Osun Chapter of Nigerian Legion,Oladimeji Olalere, commended Oyetola for being supportive of his body, describing the gesture as unprecedented.

Olalere also lauded the governor for the adminstration’s commitment to good governance.