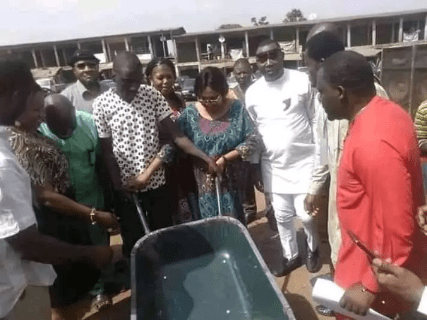 …As Critics counter: It is demeaning to give out wheelbarrows for empowerment!***

The Transition Committee Chairman of Nsukka Local Government Area of Enugu State, Mrs Chinwe Ugwu  who empowered indigent youths of the area with wheelbarrows to enable them push better barrow pushing has said she has no apologies.

Highlighting that the gesture was essentially to assist them economically, She also frowned on criticism by some individuals and organisations who castigated her for initiating what they perceived as an awkward “poverty alleviation” programme.

Ugwu had on Monday, donated 30 new wheelbarrows to some wheelbarrow pushers, who hitherto hired them to earn a living by conveying people’s goods.

Addressing newsmen in Enugu on Tuesday, she said that she was not done yet, adding that she would increase the number to 100.

She said: “I don’t feel bad at all. I don’t see anything bad in what I have done. I have no apology for anybody.

“People, who don’t understand what I have done, can go ahead and say whatever they liked.  I even want to make it up to 100.

“These are poor people who cannot afford to buy wheelbarrow but had to hire for between N200 and N300 per day.

“Some youths came to me and made the request on behalf of the wheelbarrow pushers and I told them to go and write down the names of those that cannot afford to buy their own.

“You need to see how happy they were that they now have their own, which was given to them free of charge.
“They were asked to write whatever inscription they liked on the wheelbarrow because it now belonged to them.
“They were so happy that some of them came to me, asking, ‘Mayor, can we touch you? You need to have seen them.

“They were so happy and I have no apology. I’ll even do more. I heard that some labourers hire shovels and head pans for mason and concrete work.

“I’ll also buy head pans and shovels for them so that they can feed their families.

“All my life, my heart has been going to the poorest of the poor and you know that they are all over the world

“Will you phase out wheelbarrow pushing because of Chinwe Ugwu?”

Meanwhile, some of her detractors have continued to criticise the gesture, saying that it was demeaning to give out wheelbarrows as empowerment to Nsukka youths.

Commenting on the gesture, Mr Mark Onuora of the Enugu State Youth Assembly said it was a wicked act that the Nsukka Mayor should “belittle the youths by giving them wheelbarrows.”

“Madam should have consulted well before embarking on this wicked youth empowerment.

“As for the wicked act, the world will hear about it.  It is wicked and barbaric to the youths of Nsukka and she even had the guts to put Gov. Ugwuanyi’s face on this shame.

“This nonsense must stop in 2020,” he said.
Also, the leader of Coal City Youths Initiative, Mr Johnpaul Ani, described the poverty alleviation donations as a charade.