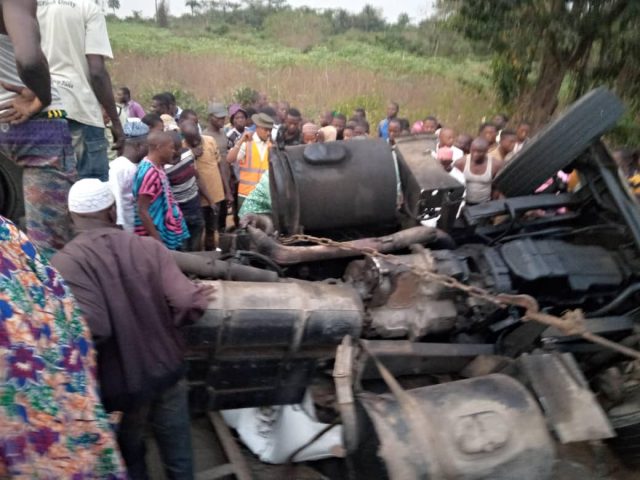 …As LASEMA says Ogudu under bridge lone accident claims one, injures 12 others***

The state FRSC Sector Commander, Mr Joel Dagwa, confirmed this on Wednesday in Minna, noting that the incident which occurred on Tuesday involved a trailer without registration number, loaded with 46 people, 37 cows and 10 goats.

He highlighted that out of the 46 people involved in the crash, eight died, while 17 sustained various degrees of injury and were rushed to Cottage Hospital, Kagara, for treatment.

“We have also deposited the corpses at Kagara Cottage Hospital,” the sector commander said, blaming the incident on fatigue and overloading.

Meanwhile, one person died  and 12 others sustained varying degrees of injuries in an auto accident involving a commercial Volkswagen bus, popularly called Fanagon, at Ogudu area in Lagos.

Dr Femi Oke-Osayintolu, the  Director-General (D-G) of the Lagos State Emergency Management Agency (LASEMA), confirmed this in a statement he issued on Wednesday.

Oke-Osanyintolu said  that the bus, with registration number GGE 845XQ , was fully loaded with passengers and was involved in a lone accident at  Ogudu under  bridge.

He said  that the response team  from LASEMA who went to  the scene of the accident rescued 12 victims and evacuated the lone fatality.

“Investigations conducted by the team revealed that the bus lost control while on speed and, as a result, rammed into the culvert at the spot, leading to the death of one  person; and others sustained various injuries.

“Another set of three injured male adults were taken to the Trauma Centre, while others were taken to nearby hospitals for treatment,” Oke-Osanyintolu said.

The LASEMA boss restated his appeal to  drivers to always drive with caution.

He also advised them to always obey traffic laws and regulations in order to reduce road accidents to the barest minimum in Year 2020 and beyond.