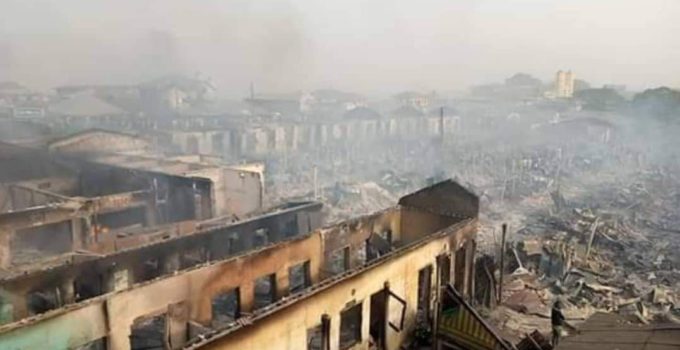 The Federal Government has handed over building materials to the Oyo State Government for the reconstruction of the razed Akesan market in Oyo town.

The newsmen report that the materials were handed over to the state government on Thursday evening in Oyo town through the National Emergency Management Agency(NEMA).

NAN recalls that the popular Akesan market in the ancient Oyo town was on Jan. 4 razed by inferno.

Among the materials handed over were 1000 bags of cement, 1000 bundles of roofing sheets, 200 packets of zinc nails and 100 bags of nails.

Mr Mustapha Maihaja, the NEMA Director-General, said the materials was to support the effort of the state government in the reconstruction of the razed market.

Maihaja, who was represented by Dr Onimode Bandele, NEMA Assistant Director, Relief and Rehabilitation, said that the materials  would help in bringing back hope to the market traders.

“On the 5th of January, a rapid assessment was conducted by the Zonal Office and because of the nature of the incident, the Federal Government has provided these building materials to support the reconstruction of the razed market.

“It is our belief that with the plan in place, these materials will at least go a long way in supporting the government’s efforts in bringing back hope to the market traders,” he said.

He gave an assurance that the agency and the state government would ensure all necessary measures were adopted to forestall disasters in the state.

He further urged the local government caretaker chairman and other functionaries to ensure judicious use of the materials in building an ultra modern market.

NAN reports that the materials were handed over to OYSEMA which later handed them over to the council.