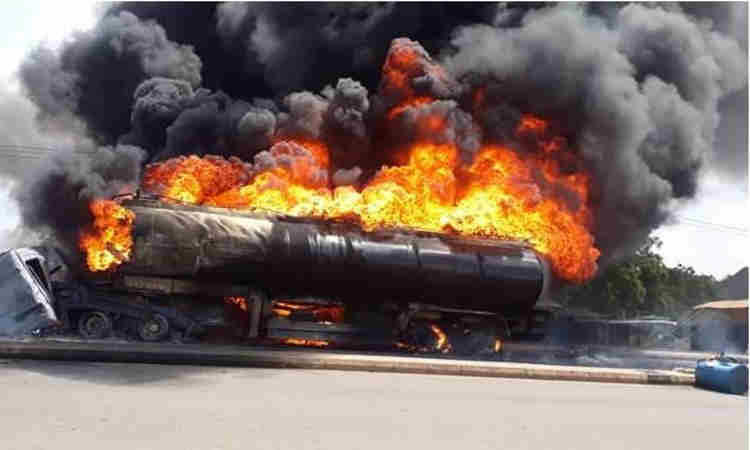 The Federal Road Safety Corps (FRSC), Anambra  Command, on Friday said no casualty was recorded in the tanker that burnt at Upper Iweka in Onitsha.

The state Sector Commander, Mr Andrew Kumapayi, told the newsmen the tanker loaded with 33,000 litres of petrol with no registration number, caught fire about 2:30.a.m. on Friday.

“The tanker caught fire due to electrical fault in the engine of the vehicle. The driver started shouting fire! fire!!,the neighbouring houses tried their best to put out the fire.

“But Fire service men, FRSC officials and the Policemen responded promptly and the fire has been extinguished.  No casualty or injury was recorded.

“Officers of FRSC are diverting traffic and cordoning the scene to avoid running into the carcass and the fire service vehicles,” he said.

A similar incident happened on Thursday when a truck loaded with goods going to Enugu went into flames along UNIZIK main gate, Awka-Enugu expressway about 2:30 p.m.

Kumapayi said that the FRSC patrol team alerted the state fire service which responded and was able to put the fire under control.

“The vehicle which loaded from Onitsha Main Market, was heading to Cameroun. The Driver, Mr Chimezie Aneke said they were traveling with the manager of the company and two others.

“Some of the goods in the vehicle included: AC gas cylinders, perfumes, cosmetics, grinding machines, soaps, etc.
There was no injury, ” Kumapayi said.

In the meantime, the Lagos State Emergency Management Agency (LASEMA) on Friday rescued a man trapped in an uncompleted-three-storey building.

The agency said that the building was located at No.12, Alasepe St., off Community Road, Ago Palace Way,  Okota in Lagos State.

The Director-General (D-G) of LASEMA, Dr Olufemi Oke-Osanyintolu, confirmed the development to the newsmen in Lagos.

He said that when the rescue team from the agency arrived at the scene of the incident, it noticed that a three-storey building approaching completion had collapsed.

He said that the LASEMA rescue team rescued alive a male-adult at 11a.m. who was said to have been trapped under the rubble since 9 a.m.

“Our initial finding confirmed that the collapsed building was a three-storey building under construction and that the impact of the collapse had affected the adjacent structure.

“The resultant crowd is under control, and the extrication as well as recovery of the trapped person with the use of all Emergency Light Tools at our disposal was successful,” Oke-Osanyintolu said.

He, however, said that once the operation had been completed, the remaining part of the structure would undergo a controlled demolition to ensure the safety of lives in the environment.

Oke-Osanyintolu said that the Lagos State Commissioner for Physical Planning, Dr Idris Salako, and other key stakeholders were at the scene of the incident.