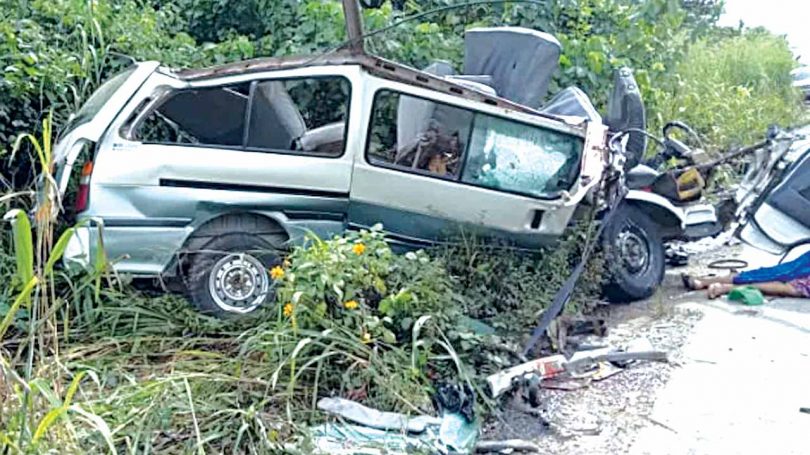 The Federal Road Safety Corps (FRSC) confirmed Thursday, that no fewer than nine, of the 19 persons in a lone accident involving a Toyota Hiace bus, were burnt to death, at Ijebu-Ife on the Sagamu–Benin Expressway.

The FRSC Sector Commander, Ogun State confirmed this in Abeokuta, noting that the accident happened about 3.20p.m.

He said that the ill fated bus was conveying 17 adults and two children before the incident.

The FRSC boss stated that 10 other passengers were rescued with three of them sustaining serious injuries.

He remarked that preliminary investigation showed that the bus, which departed from the East was Lagos bound, was conveying the passengers with some inflammable chemical products.

“Preliminary investigation by the FRSC Crash Investigator revealed that the vehicle while on transit suffered malfunctioning and had to stop intermittently at several times to repair faulty fuel pump and fuel tank which they kept on managing by tying ropes to support the malfunctioned fuel tank.

“The driver hoped he could managed the vehicle to Lagos, but there was sudden spark and explosion, which engulfed the vehicle in fire while on motion.

“The unidentified inflammable substances conveyed in the bus assisted to intensify the inferno.

“After the fire was extinguished by the Nigeria Fire Service, a total of nine persons, consisting of seven adults and two children were confirmed dead,” he said.

Oladele advised motorists to adhere strictly with the 1947 United Nations Agreement Concerning the International Carriage of Dangerous Goods by Road (ADR) to prevent this type of avoidable crash.

He said that the injured victims were rushed to ROONA Hospital, Ijebu Ode, for immediate medical attention, while the deceased were deposited at same hospital morgue.

The sector commander commiserated with the victims of the unfortunate incident and requested their relatives to contact the FRSC Unit Command at Ijebu Ode.