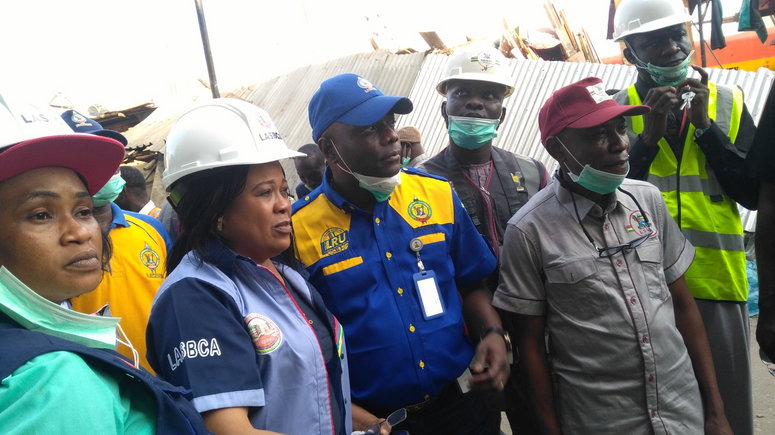 …As Police confirm death of a man in hotel***

Oke-Osanyintolu reported that the building collapsed as a result of lack of maintenance and structural instability.

“However, there was no loss of life or injury sustained in the incidence.

He said that recovery operation had taken place to ensure safety of lives and property in the area.

In a related development, a fire outbreak which occured in a storey building situated at 22, AIT road kola bus stop Alagbado, on Friday, in Lagos.

Oke-Osanyintolu, said that when the LASEMA team arrived the scene of incident, it discovered that a storey building consisting of four flats of three bedroom each, was gutted by fire.

“Further investigation revealed that the cause of the fire was due to electrical surge which emanated from the ceiling fan in the living room and which escalated to other rooms in the affected flat.

“Fortunately no loss of life or injuries was recorded at the incident.

“The fire was curtailed and finally put out by the combined efforts of the Agency’s LRT (Dolphin Squad) and Men of Lagos State Fire Service Operations,” he said.

In the meantime, the Delta Police Command has confirmed the death of a man in a hotel, in Ibusa community.

Command spokesperson, DSP Onome Onovwakpoyeya told journalists on Friday in Asaba that the incident occurred on Thursday in Ibusa community, near Asaba.

The police image maker said the matter was reported at the Ibusa Police Division by the hotel management.

“We received a report of the incident and our officers went to the scene and removed the corpse.

“However, we have commenced investigation into the matter,” Onovwakpoyeya said.

Sources in the community however alleged that the man died after a sex romp with a woman.

The deceased until his death, was a 55 year-old commercial bus driver.

“The man is married and lives in Ibusa with his family.

“On the day of the incident, he went to the hotel with his lady friend, a mother of three.

“We learnt that the lady sneaked out of the hotel room and told the hotel receptionist to check on the man that he was not feeling too well.

“It was the hotel receptionist that raised alarm after she saw the man lying motionless on the bed,” the source said.

The source, who pleaded anonymity further revealed that the lady went into hiding after she escaped from the hotel but was later apprehended by officers of Ibusa Police Division.