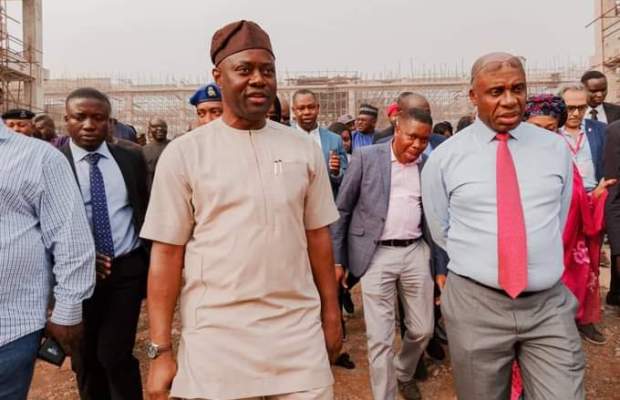 The Minister of Transportation, Mr Rotimi Amaechi, on Monday embarked on routine inspection of the Lagos-Ibadan rail project.

Amaechi who was accompanied on the inspection by the Oyo State Governor, Mr Seyi Makinde noted that a large chunk of the rail line was in Oyo State.

The inspection kicked off from the Railway Mega Station in EbuteMetta to Apapa, Lagos and moved all the way to Ibadan, Oyo state.

The Lagos-Ibadan rail project was expected to be completed in February 2021, but was recently extendeMr Rotimi Amaechid to April due to some unforeseen circumstances.

However, the seven smaller stations on the Lagos-Ibadan Standard Rail Gauge corridor are yet to be completed, an issue the minister tackled during his last routine tour of the project.

Saraki who stated this during the monthly inspection of the standard guage line by transport minister Rotimi Amaechi, also disclosed that a lot of pressure was being mounted on the China Civil Engineering Construction Corporation (CCECC), to ensure this was done.

“The minister has emphasised to the CCECC that they must use local materials.

“You saw the glass, roofing and the rest at the stations, it’s all local. So, there is a lot of pressure on them to use local content.

“They argue when we say they must buy it from Nigeria; they say Nigerians buy it from their own country. But we say no, local content is absolutely necessary.

“Already, a lot of Nigerians have gone to China to study rail management. We want local engineers to work on the rail lines,” she said.

Earlier, Gov. Seyi Makinde of Oyo State had said that the project on completion would boost the economy of the state and its environs.

Makinde explained that with the challenges of over population and deficit in infrastructure around Lagos, the rail would enable people spread out further to other areas.

“If you take for instance the dry port in Ibadan, it will be a lot easier for people coming from Osun, Kwara,  Ondo, Ekiti to get to Ibadan, clear their goods and go back.

“And for us also, it will create employment for our people locally, so when you aggregate all of this, you can see that this will significantly impact on our economy.

“Generally, I’m encouraged that this is not going to be an abandoned project: it is not a white elephant project.

“It is a project that will have great impact on the economy of Oyo State in particular, and extend to Ogun and Lagos States,” he added.