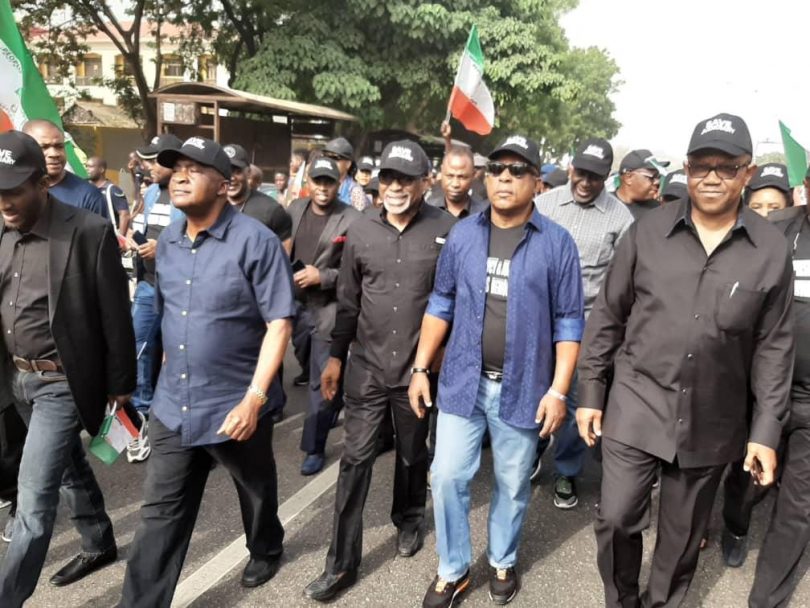 In continuation of its call for the review of the Jan. 14, Supreme Court judgment on Imo governorship elections, the Peoples Democratic Party took its protest to the Eagle Square, Abuja, on Monday.

The protest which started at the PDP’s Legacy House to the Three Arms Zone was led by the PDP National Chairman, Mr Uche Secondus.

The National Chairman of PDP while addressing the protesters said that Supreme Court had misfired as the figures that gave Gov. Hope Uzodinma victory were “not adding up”.

The Supreme court had on Jan. 14, 2020 sacked Mr Emeka Ihedioha of PDP as Imo governor and declared the All Progressives Congress (APC) candidate, Sen. Hope Uzodinma,  as the duly elected governor.

Secondus said all the protesters were demanding for was for the Supreme Court to reverse its judgment which removed Ihedioha as the governor of Imo.

According to him, the PDP leaders and supporters are out for a peaceful, nonviolent protest to show they are all Nigerians.

He described PDP as “the most peaceful party, the largest party and well organised party in Africa”.

“I want to congratulate you all for coming from all the nooks and crannies of this country, peacefully, to register our protest.

“We are here, under one God, under one nation; our nation is under the rule of law.

“We are a nation governed by law; therefore, all we are seeking today is for our very highly respected jurists at the highest court of the land to be just.

“We are not against you, we are against the error. And by the special grace of God, I know you will revisit the error.

“All we are saying is for you to review this error because the figures are not adding up.

“We, therefore, call on the leadership of the judiciary to please note that we are all human beings. God is the highest.

“We know that they worship God, all of us worship God, to revisit and reverse the Imo State judgment because we believe that the figures are not adding up,” he said.

Secondus said that the party believed that the Supreme Court judges would hear their cry, revisit, review, and if possible reverse the judgment.

“That is justice that will be done, not only to the people of Imo but for Nigerians who are crying. This is time to show courage,” Secondus said.

Also speaking, the former Governor of Anambra, Mr Peter Obi, said he was not just speaking as member of PDP, but also as a beneficiary of the right thing done by the party during its 16 years administration.

Obi, the running mate to Atiku Abubakar in the last Presidential election, recalled how he was a member of a minority party (then APGA) and he won election, went to court and PDP did not intervene.

He added that Mr Adams Oshiomhole, former Edo governor and National Chairman of the All Progressives Congress couldn’t have been governor, or beneficiary of judiciary, if PDP  had intervened.

“So as a beneficiary, I am appealing to the judiciary to save this country. What happened in Imo State is enough to kill our democracy.

“Let us ensure that the judiciary is the last hope of the common man,” Obi said.

The Senate Minority Leader, Sen. Enyinnaya Abaribe, said the only message of PDP was that the judgment should be reviewed as figures were not adding up.

In the meantime, Imo Governor,  Sen. Hope Uzodinma, has decried the nationwide protest organised by the People’s Democratic Party (PDP), rejecting the Supreme Court judgement that declared him the governor of the state.

Uzodinma made the remark on Monday, while addressing supporters of the All Progressives Congress (APC), who occupied the streets of Owerri, in a solidarity rally for the party.

He charged the Federal Government to call the PDP and its supporters to order, saying that the situation could degenerate to anarchy, if not checked.

He further called on Imo residents to go about their normal businesses without fear of harassment and described the Supreme Court victory as divine.

He said: “I am calling on the Federal Government to look into issues concerning the protest and caution the PDP against possible anarchy.

“I call on you to go about your businesses without any fear of harassment.
“My victory is divine and only God can remove me from office because I credibly won the election as has been affirmed by the highest court of our land.”

The supporters carried placards with different inscriptions, such as “Hope for Imo”, “Uzodinma we know”, and “On Supreme Court judgement we stand”.

Some of the supporters described the PDP protest as “infantile”, adding that it was “dead on arrival.”

A former member of the Federal House of Representatives and former Speaker, Imo House of Assembly, Mr Goodluck Opiah, advised PDP to accept the judgement in the spirit of sportsmanship.

He expressed confidence in Uzodinma’s ability to pilot the affairs of the state and assured Imo residents of better times ahead.

“In the last election, I contested for House of Representatives seat and lost.

“When the tribunal and Appeal Court affirmed my opponent’s victory, I wished him well. I expect the PDP to do the same in the interest of democracy.

“I have complete confidence that Uzodinma means well for Imo people and there is a lot he can achieve without distractions of this nature,” he said.

Another APC faithful and former member of the Imo House of Assembly,  Mr George Egu, said that with the APC in Imo, better times were ahead for the southeast.

He cautioned against possible disintegration of the zone,  adding that Uzodinma’s emergence would give the zone better negotiating power for the 2023 presidency.

“This is time to come together and take advantage of the situation on ground by lending our support to Uzodinma for the overall good of the southeast.

“With APC in Imo, the southeast will have a better bargaining power for the most coveted office of the land in 2023,” he said.

The PDP on Sunday held a nationwide protest, challenging the January 14 Supreme Court judgement, which nullified the election of Chief Emeka Ihedioha.