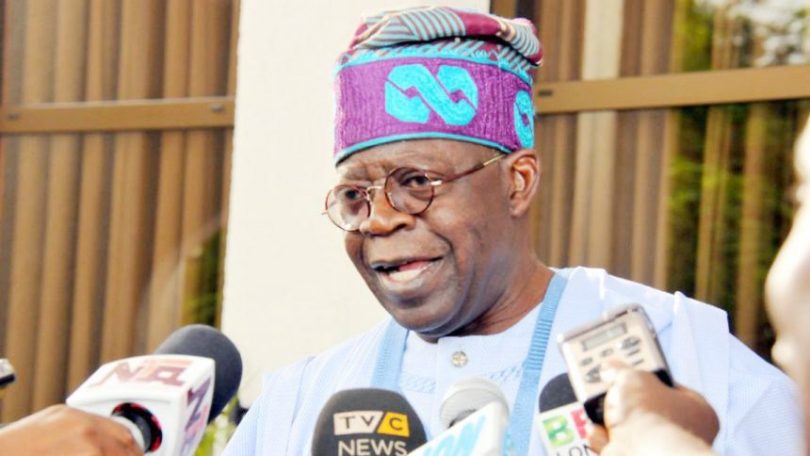 National Leader of All Progressives Congress (APC), Sen. Bola Tinubu, broke his silence on Wednesday on the volatile issue of ‘AMOTEKUN’, saying he did not believe the Western Nigeria Security Network was intended put the country at risk.

He also called for dialogue between governors of South West states and the Attorney-General and Minister of Justice over the zone’s security initiative, code-named “Amotekun”.

Tinubu in a statement in Lagos titled “Public Discourse on Amotekun”, has therefore advised on the need for dialogue between the Yoruba States governors and the Attorney General, Malami to address the grey areas.

The APC leader, who was reacting for the first time since the issue became a national debate, however, said what could undo the country was the negative commentaries and “the dangerous rhetoric of those who should know better.”

He added: “Those claiming that this limited, inoffensive addition to security threatens the Republic have taken themselves upon a madcap excursion.

“Those claiming the Federal Government seeks to terribly suppress the South West have also lost their compass.

“Those who occupy these two extremes have sunken into the dark recesses of fear and political paranoia that can undo a country if such sentiments are allowed to gestate.

“This issue (Amotekun) has dominated recent discourse and media headlines. Distilled to its basics, it concerns how best state governments can assist with the safety and security of their residents.

“This is a matter of serious concern entitled to sober thought. However, it has been turned to a political tug of war, fierce and often unthinking rhetoric, for and against, has crossed the lips of too many Nigerians.

“More subjective than objective thinking has been the fuel of this outburst. Question those in favour of Amotekun, most have but the vaguest notion about. it.

“They know few details yet vigorously attribute to its opponents the most negative intentions.

“Ask those who oppose Amotekun, they are equally ignorant of its provisions; They oppose the initiative not on its merits but merely because it was proposed by their political opponents or because they don’t see an avenue for personal gain from it

“While colourful, the rhetoric has been disconcerting. How people have mishandled this matter demonstrates that we still have far to go in perfecting democracy.”

Tinubu said he did not see malign intent in the differences of opinion between South West governors as authors of Amotekun and the Attorney-General as the primary law enforcement officer of the country.

He said the issue of Amotekun was a step in the evolution of the country’s federalism.

“This is an opportunity to more clearly define that federalism; but one cannot attain this better, more functional definition through overblown, emotional language. Objectivity and calmness are required.

“To a significant degree, the enduring quality of our republic will be established by the sagacity with which we handled disagreements regarding the division of power between federal and state governments.

“Such disagreements are inevitable. This is not the first nor will it be the last . We must devote our energies towards solving problems rather than amplifying them,” he said.

Tinubu said some elements had wanted his hurried, swift reaction on the issue for adversarial intent.

The APC chieftain added that such elements wanted him to ” misspeak or misstep in a manner they could twist to their political advantage.”

Tinubu said that he took his time to react on the issue in order not to make hasty, ill-conceived utterances that could be used by some people to cause problems.

“I believe in this nation and its benign prospects. I dearly love its people, all of them. Over the years of our existence, they have suffered much.

“Yet they still hold forth with heroic patience and an extraordinary optimism borne of strong faith.

“To these people, I owe my best. I shall not treat them cheaply or bandy their emotions like some errant football. The welfare of this good and decent people is my overriding concern,” he said.

Tinubu commended South West governors for their bold attempt at addressing the security challenges in their respective states with “Amotekun”.

He said when he was governor of Lagos State, he created the Neighborhood Watch, not to replace the police, but to complement their efforts in addressing security challenges.

He said judging from the public statements of South West governors, Amotekun was meant to be structured along the line of his Neighbourhood Watch to assist the police in tackling security challenges strictly through information sharing.

The APC chieftain said as much as he strongly believed in community policing, he did not think Amotekun should have a regional outlook or be implemented in a way that could result in problems.

“My position on Amotekun is not blind or uncritical; there are several organisational and functional aspects of the proposal that could cause problems if left unresolved.

“First, the stated mission is information gathering by civilians. Such tasks are always and everywhere best done in low-key fashion. Some aspects of Amotekun seem to undermine rather than enhance this function.

“Second, equipping Amotekun with shadowy paraphernalia may cause the public to misconstrue the role of Amotekun, incorrectly believing its mandate is more expansive than it is. This possible disconnect could impede the good aims of the programme.

“We should also consider that the Buhari administration has approved implementation of a policy of community policing wherein additional recruits from all 774 local government areas will be added to the force to help protect their communities.

“As the Federal Government emphases grassroots policing, it is uncertain how well Amotekun can complement the police force as the force moves toward decentralisation when Amotekun is organisationally leaning the opposite way.

“We have been fighting for local and decentralised policing for a long time because we know that too much centralisation impedes performance.

“In regard to actual performance of its appointed tasks, Amotekun should have focused on grassroots local organisation at the state level without a regional command hierarchy.

“The regional approach may undermine efficiency. There is no compelling logic why the same personnel providing security and informational assistance in Ado-Ekiti should be under the same functional and operational leadership as those providing assistance in Lekki or Akure.This will not lead to optimal leadership.

“The regional approach has only limited benefit with regard to the procurement and maintenance of vehicles and communications equipment because this vendor approach allows for economy of scale.

“Some things need to be corrected before Amotekun becomes operational. If not, it will not live to expectations.

“This, the current formulation of Amotekun is in need of repair before it takes to the road only to quickly slip into a ditch,” he said.

Tinubu said the governors should have carried Malami along in the process of conceiving Amotekun, saying that would have helped prevent the open disagreements between the two patties.

He also criticised Malami for saying Amotekun was proposed to be a defence agency, adding that the idea was far from the description.

The APC chieftain said Malami should also have met the governors to iron certain issues out on Amotekun rather than coming public with hasty statements.

Tinubu urged Nigerians to shun those who employed heated language to inflame emotions on the issue.