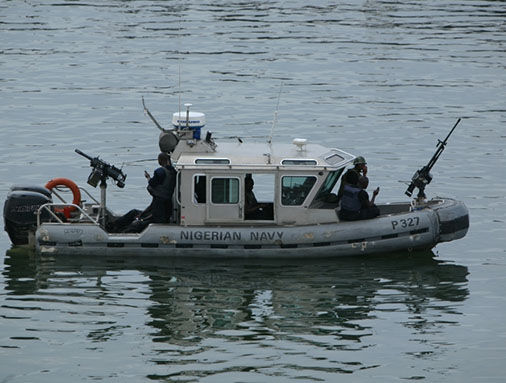 ..As FRSC set to intensify patrol against reckless driving on Lagos-Abeokuta Expressway***

The Forward Operating Base (FOB), a unit of the Nigerian Navy, based in Brass Local Government Area of Bayelsa on Wednesday handed over a seized Barge, ‘MT Gratitude’ laden with 1000,000 litres of diesel suspected to be illegally refined to the Economic and Financial Crimes Commission (EFCC) in Brass, Bayelsa.

The FOB also delivered six crew members of the tug boat to the EFCC, for further investigation of their alleged involvement in oil bunkering and refining.

The  Commander of FOB Formoso, Commodore Ibrahim Suleiman, while handing over the suspects and barge, said the Navy was determined to rid the region of illegal activities, especially oil bunkering.

He said the barge which was caught in Brass inland by naval intelligence officers was carrying 1000, 000 liters of illegally refined diesel worth about N350 million.

He said: “MT Gratitude, owned by Ocean Honey Nigeria Limited was arrested on Jan. 9 conveying AGO, also known as diesel.

“As you know the Niger Delta is known for illegal bunkering, popularly known as Kpoo Fire.

“The laboratory test analysis of the Department of Petroleum Resources, shows that the product is fake.

“As directed by the Chief of Naval Staff, Ibok-Ete Ibas, that crude oil theft, illegal bunkering and all forms of criminalities should be stopped in the region.”

He said the Navy has been patrolling the sea to ensure that the waterways are safe for sea fearers to carry out their legitimate businesses.

Receiving the barge and  the six suspects on behalf of the EFCC, Principal Detective Superintendent, Tasiu Abubakar assured the Navy of diligent investigation and possible prosecution.

In another development, reckless drivers plying the Lagos – Abeokuta routes may soon run into trouble waters as the Federal Road Safety Corps (FRSC) is deploying a special unit on the axis, equipped for constant patrol and monitoring of recklessness.

The FRSC Itori Unit Commander, Mr Sunday Oko, confirmed this on Wednesday in Ota, Ogun, noting the soaring volume of traffic around Itori area on Lagos-Abeokuta Expressway, due to the ongoing reconstruction works on Lagos-Ibadan dual carriageway.

“The FRSC has increased its presence around Itori and environs to monitor traffic, and also to promptly respond to any emergency.

“Our presence on the road has also deterred motorists using this corridor as an alternative route from reckless driving, because they know they will be arrested, ” he said.

The unit commander noted that the rescue team was in place daily and ready to respond to  cases of accidents promptly.

Oko said the command had improved its operations through public enlightenment by carrying out early morning safety cry, to educate drivers and passengers at various motor parks.

According to him, this has helped to reduce accidents to the lowest level.

He said the command would continue with the public enlightenment throughout the year, to make the highway safer for the people.