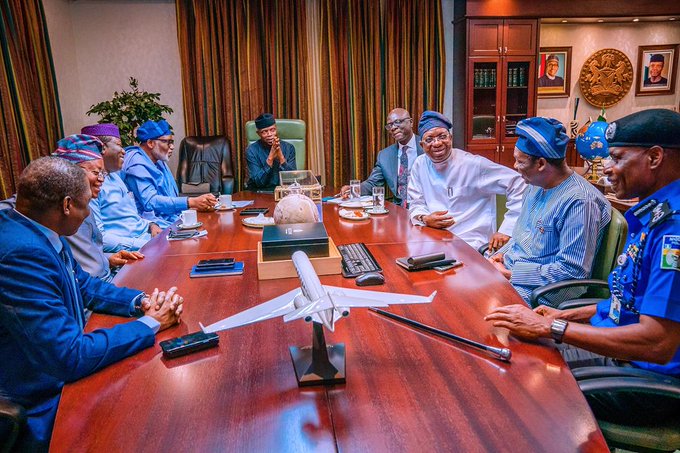 …As Rep urges military to curb Insurgency through security intelligence***

Vice President Yemi Osinbajo on Thursday met with South-West Governors where it was agreed that the structure of Amotekun should also align with the Community Policing strategy of the Federal Government.

Amotekun is a security Initiative inaugurated on Jan. 9, 2020, by the Governors of the South-West to address the challenges of insecurity in the region.

The meeting, which was attended by the Attorney-General of the Federation, Abubakar Malami and the Inspector General of Police, Muhammed Adamu, also agreed that necessary legal instruments should be put in place by each of the states to give legal backing to the initiative.

Confirming this development in a statement in Abuja, Senior Special Assistant to the President on Media and Publicity, Office of the Vice President, Laolu Akande, said the legal backing would address all issues concerning the regulation of the security structure.

He said the meeting was at the instance of the governors who had asked to see President Muhammadu Buhari over the controversy surrounding the Amotekun initiative.

“However, due to the President’s foreign engagement, he asked the Vice President to host the meeting.

“The meeting was very fruitful and unanimous resolutions were made on the way forward.

“Having regard to the need for all hands to be on deck in addressing the security concerns across the country, it was agreed that the structure of Amotekun should also align with the Community Policing strategy of the Federal Government,” he added.

Also speaking to State House correspondents on the outcome of the meeting, Gov. Rotimi Akeredolu of Ondo State, described the meeting as ‘very fruitful’.

He said: “We have rubbed minds and all of us have agreed on the way forward. The most important one is that we are going to have legal framework to back this Amotekun.

“And this legal framework is going to be one which we all are going to look at and will be sure to go without any hinderance.”

He dismissed the insinuation that the federal government had wanted to stop the security Initiative, saying that the Attorney-General was misquoted on the matter.

“No, the government is not trying to stop it. The attorney general has spoken on that, I’m sure you have all read the statement that he was misinterpreted.

“So it’s so clear, there was no time that government wanted to stop Amotekun and the AGF having spoken, it’s all about us, so there is no problem,” he said.

Meanwhile, a member representing Pankshin, Kanke and Kanam Federal Constituency of Plateau, Mr Yusuf Gagdi has called on the military to improve on their security intelligence to end insurgency and other criminal activities in the country.

Gagdi, who is the Chairman, House Standing Committee on Navy, gave the advice at a news conference on Thursday in Jos.

The lawmaker was reacting to the killing of Dalep Dachiya, his constituent and student of University of Maiduguri, by the Boko Haram terrorists.

He said the move would enable security agencies to end the maiming of innocent Nigerians by the insurgents.

He said that one of the major problems militating against the ongoing fight against insurgency was poor security intelligence on the part of the military.

“The Federal Government must widen its intelligence network to identify the source of funding of the insurgents, their source of firearms and other sources of supplies.

“One of the biggest problems of the fight against insurgency is the manner in which the insurgents gather information regarding the movement and plans of the military forces,” he said.

The lawmaker accused some Non-Governmental Organisations (NGOs) operating in the North-East of aiding the activities of the Boko Haram insurgents.

He also accused the NGOs of having direct links with the insurgents, hence were secretly supporting the insurgents with funds and logistics.

Gagdi, then, described the killing of Dachiya, as “tragic, unfortunate and inhuman”, assuring that the killers would be brought to book.

He urged the family of the deceased to accept the painful loss in good faith and as the will of God.