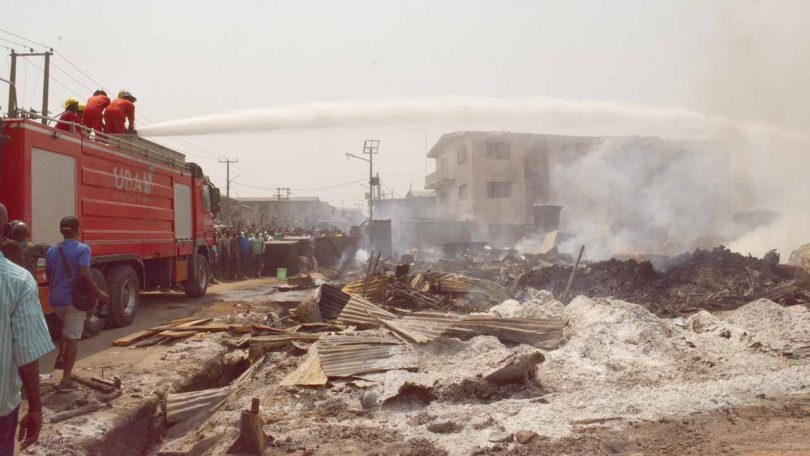 The Director General, Lagos Emergency Management Agency (LASEMA), Olufemi Oke-Osanyintolu grieved at the weekend, over multiple fire attacks in Lagos, noting that the popular Amu Plank Market in Mushin was among five places and facilities ravaged by fire in Lagos State, within 24 hours.

He identified other areas affected as Ogba, Agege, Lekki, Ikeja GRA and Mushin, noting that many shops and buildings at the Mushin plank market went up in flames during the fire which started around 11.p.m. on Friday.

Amu market is popular stockist of building materials ranging from tiles, planks, various imported doors and paints, among others.

Oke-Osanyintolu said that the response teams arrived at the scene in Mushin at 1:52 a.m. on Saturday after receiving call that Amu building material market was on fire.

According to him, the outbreak culminated in heavy explosions of plywood and asbestos materials being stored in the market.

“The Lagos State Fire Service, the Federal Fire Service and LASEMA services were dispatched to the scene.

“Due to the highly flammable nature of the wooden and polyvinyl materials, the fire continued to rage with intensity.

“There is no loss of life, two buildings have been affected by the fire while the main market of about 2,200m2 with goods and merchandise worth billions of naira had already been consumed in the fire,” Oke-Osanyintolu said.

“At 16 Ogunjimi Street in Oke Koto, Agege axis of Lagos, we observed that a storey building consisting of a room and parlour was gutted by fire.

“Preliminary investigations at the incident site (Agege) revealed that the fire started from one of the rooms at the top floor, before spreading to the other rooms. Cause of the fire couldn’t be ascertained.

“Another fire outbreak occurred by Igbo Efon Central Mosque, inward Chevron, Lekki; according to investigations, fire broke out from a bedroom before spreading to the rest of the house at 1: 30 p.m. on Friday.

“The collaboration and joint intervention of the LASEMA Response Team, LASEMA Fire Unit and the Lagos Fire Services curtailed and eventually extinguished the fire and refrained from spreading to other adjoining buildings surrounding scene of the incident, ” Oke-Osanyintolu said.

In a similar incident, LASEMA also extinguished fire at Oba Akinjobi Close, Ikeja Maryland GRA, where it was observed that the fire outbreak occurred at one of the rooms on the top floor of the four-storey building.

He said that the fire incidents were extinguished by the Lagos Fire Service  and LASEMA Fire Unit while the RRS secured the entire area during the operations.

Oke-Osanyintolu pleaded with the public to always switch off their appliances and avoid anything that could cause inferno in the state.