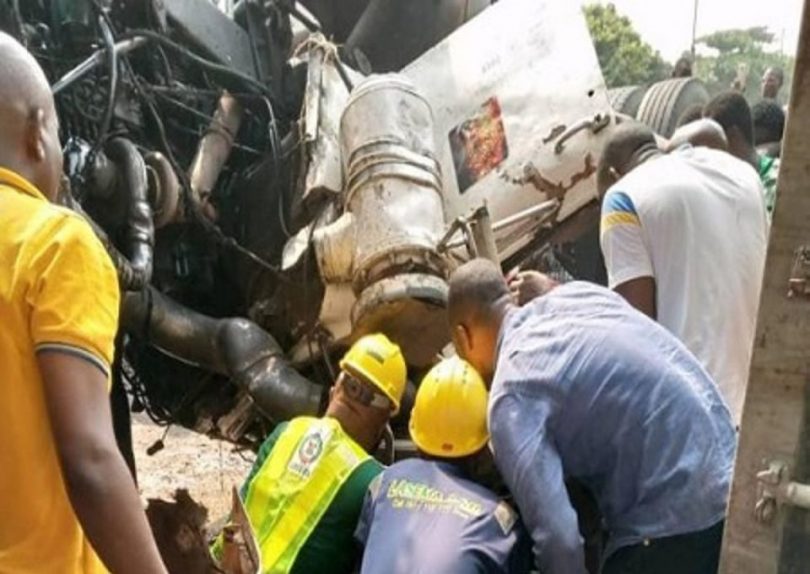 A Mack truck loaded with 2 x 20ft containers fell of Ogudu, inward Ojota in Lagos, killing one person and injuring two others.

Eye witnesses blamed the incident on overspeeding, as major reason for the driver’s loss of control.

According to him, on arrival at the scene at Ogudu “under bridge” inward Ojota, it was observed that there was a lone vehicle – a Mack truck loaded with 2 x 20ft containers.

“Further investigation revealed that the aforementioned articulated truck with an unknown registration number loss control while driving at top speed.

“It subsequently fell on its side and trapped three persons in the truck.

“The LASEMA responders sprang into action by extricating the victims with the aid of light rescue equipment.

“Two adult males were rescued, while an adult female unfortunately lost her life.

“The two casualties were taken to the nearest Trauma Centre for medical care. The remains of the deceased are being transported to the nearby morgue for processing,” Oke-Osanyintolu said.

The truck had been recovered by LASEMA’s equipment ‘Goliath’ (a Kalmar Forklift that can carry up to 45 tonnes of metal), while other agencies managed the resultant traffic delays.