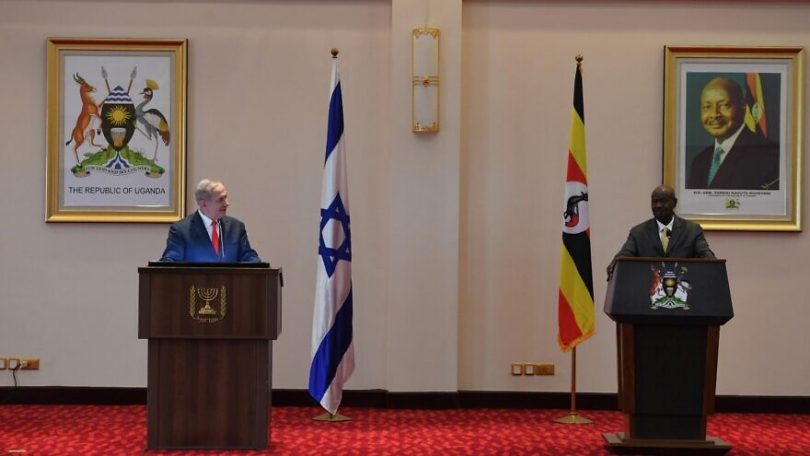 They say history repeats itself, but sometimes, history is made.

When eight Arab countries gathered in 1967 in Khartoum, Sudan, to condemn Israel just months after the Six-Day War and announce what became known as the “Three No’s”—no peace, no recognition, no negotiations—none of them could have imagined that 53 years later, Sudan’s leader would go out of his way to meet an Israeli leader to say “yes” to establishing diplomatic relations.

And that is exactly what happened this week when Sudanese Gen. Abdel-Fattah al-Burhan, the head of Sudan’s transitional government, flew to Uganda to meet with Israeli Prime Minister Benjamin Netanyahu, who was there for a meeting with its leader, Yoweri Museveni.

Dore Gold, president of the Jerusalem Center for Public Affairs, told JNS the meeting between Netanyahu and al-Burhan was the “crowning achievement” of the prime minister’s visit.

“This week is a week in which the Arab world is being mobilized by the PLO to oppose the Trump plan,” he said. “And if you are going to expect anything this week, it would be Arab states pulling back from Israel. What is so ironic with the Sudanese move is that Israel is being embraced by Sudan precisely at a time when the Arab League is pulling back.”

“That also makes this into a very big deal,” he added.

For Israel, the meeting marks a major step towards improving ties with both African and Arab countries.

Gold, previously director-general of the Ministry of Foreign Affairs, had a hand in furthering Israel’s diplomatic ties in Africa.

Israel renewed diplomatic ties with Guinea in 2016. After Netanyahu visited Chad for a renewal of ties in 2019, it was reported that Israel was working to formalize ties with Sudan.

According to Gold, Sudan is a huge country with a contemporary history, “which made it one of the centers of jihadi Islam for many years.”

Gold referred back to the 1990s, when Hassan Turabi, Sudan’s leader at the time, hosted a dozen or more terror organizations for their annual meeting, and which included the Muslim Brotherhood, Hamas, the PLO and Hezbollah.

“The most infamous guest of the Sudanese government in the ’90s was a Saudi dissident named Osama bin Laden,” he said. “So that makes Sudan a very significant place.”

Sudan, which is an Arab-Muslim-majority country that borders Egypt to the south, has long been viewed as a hostile nation towards the Jewish state.

Sudan is desperate to have sanctions lifted and be removed from the list as a state sponsor of terror. It wants to end its isolation and rebuild its economy after a popular uprising last year that toppled the country’s leader, Omar al-Bashir—considered a war criminal by the international community for his role in the Darfur genocide—and installed the joint civilian-military sovereign council headed by al-Burhan. The country is scheduled to hold elections in 2022 as part of its transition to democracy under the interim government.

‘Turning away from bad actors’

Jonathan Schanzer, senior vice president for research at the Foundation for Defense of Democracies, agreed with Gold in the significance of the meeting, telling JNS that the departure of former Sudanese president Omar al-Bashir clears the way for broader recognition of Sudan in the United States and around the world.

“Sudan was long-sanctioned for its support of terror organizations,” he said. “Now, Sudan has a clean slate.”

Schanzer said looking at Sudan’s track record the last few years, it has been “demonstrably turning away from the bad actors it has past supported.”

The meeting between Netanyahu and al-Burhan was purportedly orchestrated by the United Arab Emirates, and that only a “small circle” of top officials in Sudan, as well as Saudi Arabia and Egypt, knew about it ahead of time, reported the Associated Press.

Sudan is hoping that by forging warm ties with Israel, it would increase its chances for the United States to remove its status as a state-sponsor of terrorism, which it was designated as in 1993. Under al-Bashir, Sudan also forged close ties with Iran and served as a pipeline to supply weapons to Palestinian terror groups such as Hamas. Israel is believed to have been behind airstrikes in Sudan that destroyed a weapons convoy in 2009 and a weapons factory in 2012.

“Sudan has turned away from the Iran axis in a very clear way,” said Schanzer. “You cannot engage with Israel while simultaneously supporting Hamas and Iran.”

“Sudan has taken a very important step,” he added. It has “clearly broken with the Arab League.”

Notably, Egypt and Jordan broke with the Arab League years ago, entering into peace treaties with Israel.

“More importantly,” Schanzer emphasized, “several years ago, Sudan was actually wooed out of the Iranian orbit by Saudi Arabia, which sees it as a sort of client state.”

As such, he believes that Sudan’s outreach to Israel “came with the blessing of Saudi Arabia.”

Now, the Saudis are “waiting to see the reactions from the Sudanese people and the Arab world before they begin to think about their next moves. Bahrain perhaps comes next and perhaps after that, the United Arab Emirates,” he predicted.

The apparent Saudi-led alliance in the Middle East is slowly breaking away from past demagoguery and moving slowly toward the West.

According to Schanzer, the Trump administration has a broader idea of its “deal of the century” than what was written in the plan. “There are other inducements the U.S. can offer to some of the other countries still on the fence about recognizing Israel,” he said.

It was reported this week that the United States may move to recognize Moroccan sovereignty in Western Sahara in exchange for Rabat taking steps to normalize ties with Israel.

Schanzer explained that many Arab and African countries are “coming to grips with the realization that the Palestinian issue, while near and dear to the hearts of many, is not in their national interest.”

Indeed, in the case of Sudan, which has been wracked by tribal infighting, civil war and genocide almost continuously since its independence from Great Britain in 1956, many in the country hope to move from an isolated military dictatorship to a fledgling democracy with the help and investment of Western countries like the United States.

They will not set aside their own security or economic concerns “because of how they feel about the Palestinians’ unfulfilled national aspirations,” he said. The question right now is “how quickly these countries can move given the conservative nature of their people.”