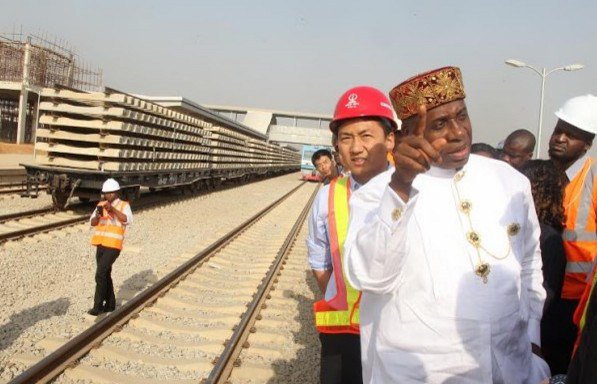 The China Civil Engineering and Construction Corporation (CCECC) handling the Lagos-Ibadan Standard Guage Rail line on Saturday said that it would deliver the project around April this year, despite all challenges.

Its Project Coordinator, Mr Xia Lijun, gave the assurance when he led some journalists on the Trial Running of the Lagos-Ibadan Standard Guage Rail line in Lagos.

“If we do not complete the project by April, we will be somewhere near completion level by then,” the CCECC coordinator said. Industry watchers however remained unconvinced of the April date, positing that they expect new ‘justifiable’ excuses.

Lijun acknowledged the project’s speed in Lagos axis was reduced, but said it was due to the urban development and other peculiarities of Lagos.

“This project is one of the fastest projects  that  China is doing in  any country. If not for the complexities of Lagos, this project should have been completed since last year.

“Today, we see one gas pipe, tomorrow we see another and so many issues like this in the state. We are working hard to meet the deadline given by the Hon. Minister of Transportation, Mr Rotimi Amaechi.

According to him, the efficiency of the firm reduces to less than one fifth in Lagos axis when compared to the usual speed of the project outside the state.

On the work progress at the Apapa port axis, Lijun said the contractor through the Federal Government was talking with the port occupants on  the way the firm would work and complete the work as soon as possible.

He said  the track laying and stations had advanced appreciably.

Meanwhile, work had not fully resumed after the New Year break in all the 10 major and minor stations on  the 157km rail line.

Industry watchers who called attention to this also raised the alarm that the project had suffered untold delays, with those concerned with the delivery raising one excuse after another.

“Do you remember that the Minister of Transportation assured Ibadan people last year, that they would soon be coming to work in Lagos from Ibadan on daily basis? Has that pledged not turned into a mere campaign promise?”, Bolutife Egbewole observed, noting that the April delivery date remains unrealistic, based on what he saw on ground.

Work was however ongoing at Agege, Ikeja, Ebute Metta, Costain and Iganmu areas of Lagos state.

The Maritime First notes that a test trial was undertaken with about 40 people.