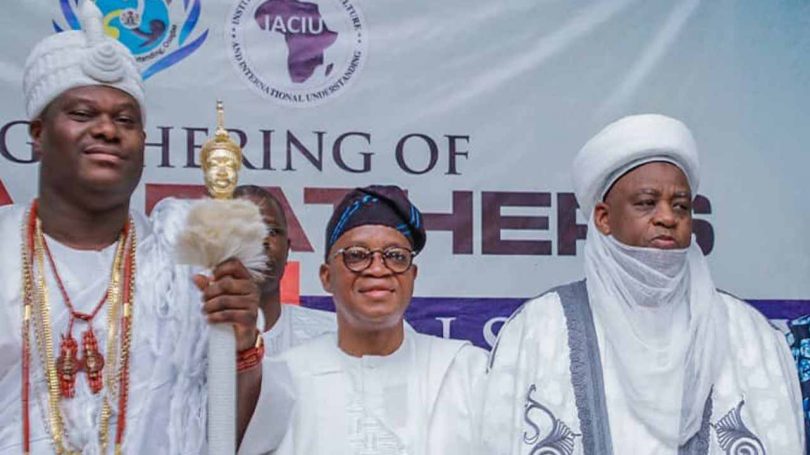 Gov. Gboyega Oyetola of Osun on Wednesday joined leading traditional rulers in calling for holistic approach in the quest to end security challenges in the country.

Gov. Oyetola made the call at the National Summit on Security and Insecurity in Nigeria attended by Ooni of Ife, Oba Adeyeye Ogunwusi and Sultan of Sokoto, Alhaji Muhammed Sa’ad Abubakar, in Osogbo.

He urged Nigerians, particularly the stakeholders and security agencies, to partner with the traditional rulers in the fight against the scourge.

The governor said for the country to overcome the menace, security agencies must collaborate with the traditional rulers, sensitise and encourage their subjects to provide intelligence and expose the criminals in their domains.

In his remarks, Oba Ogunwusi, expressed readiness of the traditional rulers to partner with government in strengthening security in the country, just as he reiterated the commitment of monarchs to ensuring a united Nigeria.

Ooni, who described security of lives and property as fundamental to existence, advocated the need for government to return security matters to traditional rulers for effective and efficient policing at the grassroots.

Oba Ogunwusi called for good leadership and committed followership as panacea for ensuring a sustainable peace in the country.

In his remarks, Alhaji Abubakar, called on Nigerian leaders to do the needful in maintaining peace and stability in the country.

The Sultan canvassed peaceful coexistence among Nigerians just as he expressed readiness to continue to partner with government to enhance security in the country.

The monarch, who advocated good governance and justice as panacea for national security, urged the citizens to rise to the occasion and speak up with one voice in all honesty and fear of God to ensure permanent peace in Nigeria.

He also called for proper upbringing of the young ones, saying the gesture would go a long way to prevent vices in the society.

The Sultan maintained that the time had come for all to follow the path that would continue to promote peace, unity, and tranquillity, particularly in the wake of dire security situation in the country.

In a related development, the Ondo State Government on Wednesday approved a draft bill of the Ondo State Security Network Agency and Amotekun Corps, codenamed operation Amotekun, for passage into law.

Mr Donald Ojogo, Commissioner for Information and Orientation, said in a statement that the bill would be transmitted to the State House of Assembly for legislative scrutiny after which it would be passed into law.

He explained that the details contained in the bill was presented by the Commissioner for Justice in an exhaustive session of deliberations by the state executive members.

“The draft bill has six parts and 44 sections. It is also gratifying to disclose that every apprehension or fears expressed in various quarters have been adequately looked into.

“This is even as traditional rulers will now have roles to play in the operations of the security outfit pursuant to its passage into law by the state assembly.

“Government finds it pertinent to reiterate that this laudable initiative is aimed at complimenting the efforts of the nation’s security agencies.

“It is also necessary to encourage the good people of Ondo State to take maximum advantage of this opportunity,” he said.