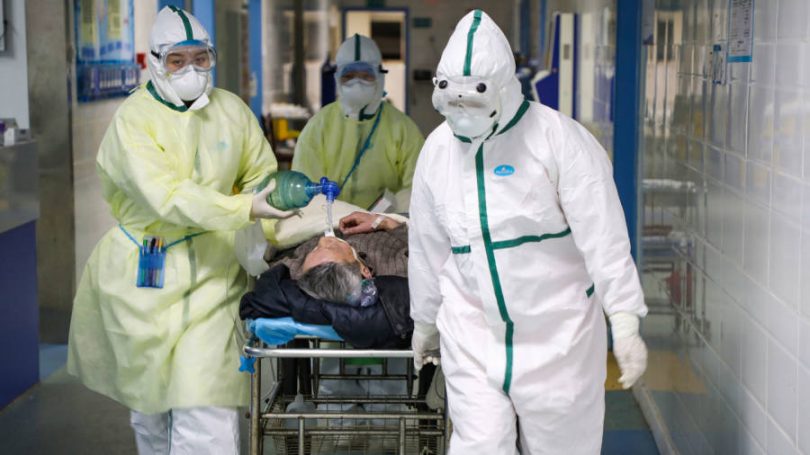 …As Cruise Ship banned over Coronavirus Fears Arrives in Cambodia***

The Chinese province at the centre of the coronavirus outbreak reported a record rise in deaths and thousands of more infections using a broader definition on Thursday, while Japan became the third place outside mainland China to suffer a fatality.

The epidemic has given China`s ruling Communist Party one of its sternest tests in years, constrained the world`s second-largest economy and triggered a purge of provincial bureaucrats. With China`s streets, restaurants and flower markets bare, a miserable Valentine`s Day was expected on Friday.

Japan confirmed its first coronavirus death – a woman in her 80s living in Kanagawa prefecture near Tokyo – adding to two previous fatalities in Hong Kong and the Philippines. Japan is one of the worst affected of more than two dozen other countries and territories that have seen hundreds of infections from the flu-like virus.

The Japanese woman fell ill in January but only later showed symptoms of pneumonia and was hospitalised, with coronavirus confirmed after her death and the contagion route under investigation, the health minister said. In central China`s Hubei province, officials said 242 people died on Wednesday, the biggest daily rise since the flu-like virus emerged in the provincial capital Wuhan in December. Total deaths in China are 1,367.

The rise, following a forecast earlier this week by China`s senior medical adviser that the epidemic may end there by April, halted a global stocks rally. But it appeared in large part to be due to methodology.

Hubei had previously only allowed infections to be confirmed by RNA tests, which can take days. RNA, or ribonucleic acid, carries genetic information allowing identification of viruses. But it has also begun using computerised tomography (CT) scans, which give images of the lungs, the Hubei health commission said, to identify cases and isolate them faster.

As a result, another 14,840 new cases were reported in the province on Thursday, from 2,015 new cases nationwide a day earlier. But excluding cases confirmed using the new methods, the number of new cases rose by only 1,508. “It is our current understanding that the new case definition widens the net, and includes not only lab-confirmed cases but also clinically diagnosed cases based on symptoms and exposure,” World Health Organization (WHO) spokesman Tarik Jasarevic told Reuters.

The new method is only being used in Hubei, and Jasarevic said the latest numbers from the province included retrospectively diagnosed cases. About 60,000 people have been infected in total, the vast majority of them in China.

In another development, a cruise ship operated by Holland America Line was finally allowed to dock in Cambodia after it was turned away from several other disembarkation ports over coronavirus fears.

It spent two weeks offshore as ports in Taiwan, the Philippines, Japan, Thailand and Guam banned the cruise ship from docking due to the increasing threat of the coronavirus outbreak. The prohibitions came despite the fact that none of the ship’s passengers was tested positive with coronavirus.

Also read:  Cruise ship with 2,500 people may be next virus prisoner

On February 12, authorities in Cambodia granted docking permission to Westerdam, bringing the two-week ordeal to an end. The information was confirmed by W. Patrick Murphy, the US Ambassador to Cambodia.

On February 13, the cruise vessel finally reached the Cambodian port of Sihanoukville. Passengers will undergo required health checks and afterward be sent home.

“Inspection and clearance procedures are proceeding aboard Westerdam. Given the number of organizations involved in supporting today’s complex operations, it is taking time,” a spokesperson for Holland America Line told World Maritime News.

“As such, we’ve had to postpone our first charter flights out that were scheduled for today, but we have aircraft secured for tomorrow. We are grateful to everyone here in Cambodia who are helping and welcoming us today.”

Another cruise vessel is currently quarantined in Japan as the number of passengers and crew infected with coronavirus is growing. The virus onboard the cruise ship Diamond Princess has now infected more than 200 people, with patients being confined to their cabins.

The cruise ship owner, Princess Cruises, said earlier that there were 2,666 guests and 1,045 crew aboard the cruise ship covering a range of nationalities. Approximately half the guests onboard are from Japan.