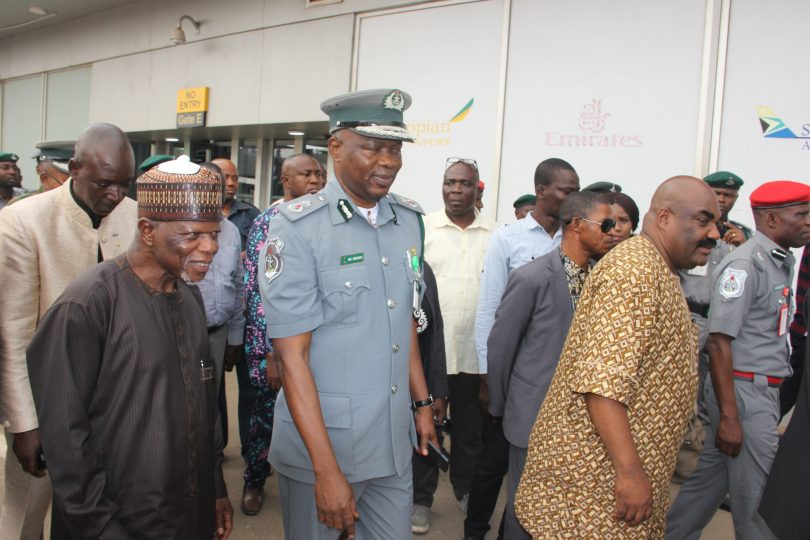 A media delight, a huge asset to the Customs Service, Customs Area Controller, Muritala Muhammed International Airport, Wale Bashir Adeniyi believes milestones accomplishments can be easy meat, if leaders would tackle corporate goals with team players and synergy of other relevant agencies. It is the conclusion of the exclusive chat, coming on the heel of a stupendous seizure of over $8million at the MMIA, as he says: Doing it right is no longer an option in Customs Service!

Against the backdrop of a stupendous seizure like this, how safe is it to risk one’s limb and all, just to do it right and deliver in the Customs Service now?

We have a job to do all the time. This is not the first time we are making seizures; some two months ago, we made some, it was a milestone seizure because nobody ever knew they were bringing things like that. They were frozen poultry products. So, when you’ve got a job to do, you have to do it!

When we talk about doing the right in Customs, it is no longer an option or a choice; it is that you are obliged to do it, if you will remain in uniform. So, there is no other considerations, apart from the Service; and of course, the nation!

We are talking of this kind of value. The value is humungous! We are talking about something close to $10 million. We know the kind of implications that this would have; if it is also proved that it is linked to some criminal activities; you can imagine the amount of damage it can cause, to finance terrorism activities; if it is to go and procure arms, or to procure drugs; or whether it is even dirty money that some people are trying to clean and launder; and use it to bring clean business; it is still criminal or, some people that are stealing from government coffers and then siphoning out of the country. So, it is illegal.

But of course, it will also be possible that it still belongs to some people that are doing some kind of legitimate business or the other. 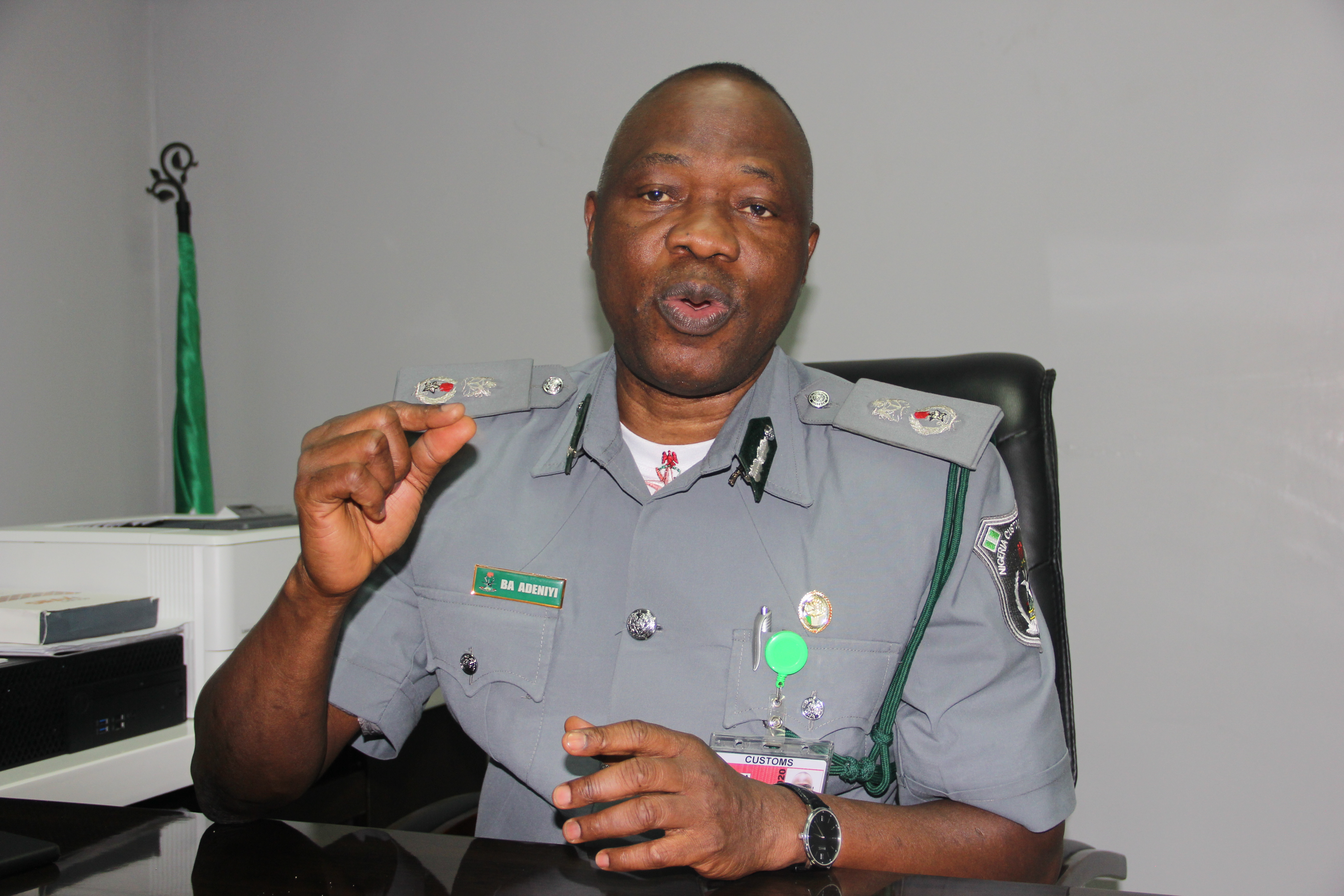 So it is difficult for us at this stage to speculate completely.

So, we will leave those conclusions and those congestions to the appropriate agency of government which is the EFFCC, to really dig deeper and beyond the surface. They would do their tracing and investigate the owners of the money and investigate their source of funding.

They would go further and investigate what they have been doing; they would check out their profile, so if they are into some clean businesses, the law will take its course, so they might release it for them, if all these are proven; otherwise, it stands to seize.

What do you consider as the major challenges of this Muritala Muhammed International Airport Command?

Generally, it is a new command, it is like when you have a baby that still has to go through the process of tutelage: to crawl, walk, eat and things like that. So, I would say we had to go through our weaning process very fast. And we have some semblance of structure. So, we will build on that . We started, we hit the ground running. With time, we will address some of the other issues.

Some of them are really very obvious.  We don’t have enough offices to support our operations. In those days when it was a different command, the narrow alley that we walk through here, most of the offices on the right belonged to the Customs; and we also had offices in other parts of the Airport. But it is no longer so now, because when the two commands were merged with each other, we’ve lost a lot of ground and we are just trying to get some of those offices back. So, that will be the first major one. 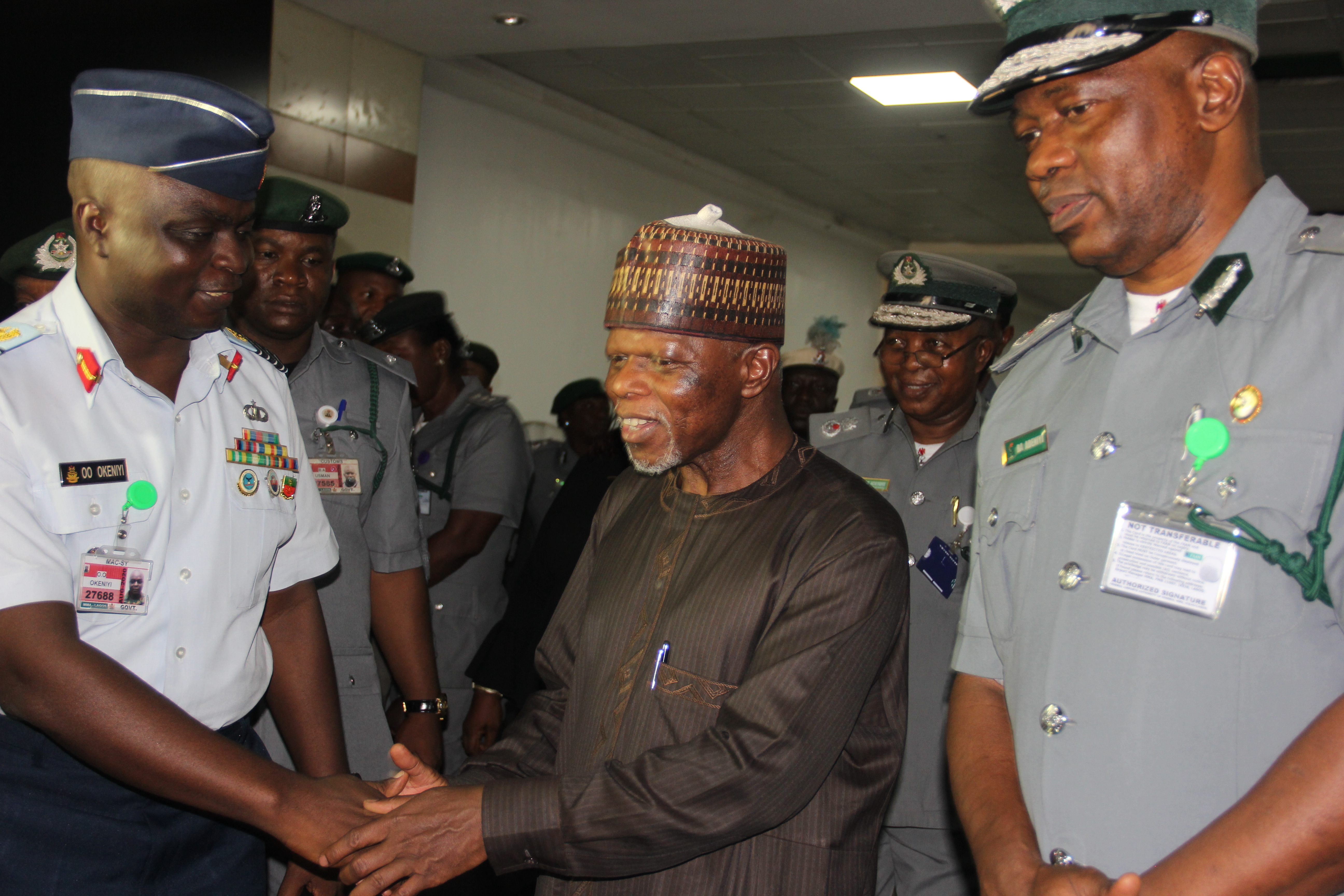 The second one would be that we will do more with better equipment. You know this is basically, an enforcement station; and if we have more long intrusive tools to do our business, we will be able to do it in a better customer friendly way; with some kind of scanners that addresses Customs’ needs and requirements and not what we are using now.

The kind of scanners that we are using now, are those required for airport authorities and Airport management.

So, we need scanners, both at Departure and Arrival. For Departure; for security reasons, things that are going out of the country, we still need to check them. We talked about the currency, if a passenger had kept this in the luggage, a good scanner would have exposed it. Our antiquities as they are going…

Some people smuggle animals through the airport and things like that!

The same thing also applies for Arrival; and Security is also important, but more importantly is for revenue generation.  First, there are some little little things that might mean a world of differences in terms of revenue; people bring in precious stones, precious metals, jewelries and things like that. They hide them inside their hand luggage and you just don’t know; and the recent trend that we have discovered in this port, is that normally; Customs officers would want to profile ladies and then see that they travel and then buy expensive jewelries, diamonds and things like that. But the recent trend that we have discovered is that men; women procure them abroad, but they now give it to men to courier it, because traditionally, it is assumed that naturally, we are not going to give attention to men. So, they will also come, they would travel light and you don’t give them any attention; and the last two cases of bringing in expensive jewelries that were seen in this airport were done by men.

So, we will need a lot of capacity training to build our officers, their capacity for them to be able to detect these without necessarily creating obstruction for passenger traffic and all of that.

We are also envisaging a situation when we get to the new wing, because operations will soon shift to that; and we are already beginning to imagine that there might be inadequacy of space for office accommodation, operational areas and things like that.

We are already starting engagement with the airport authority to ensure we raise and flag those issues; and then, address them, even before we move in.

We also do not have enough junior officers. We need a lot of them to do patrol around all of these places extensively. We need people to stay by the desk; and patrol the tarmac. The Service is currently engaged in numbers of operations, particularly enforcement of operations, i.e. taking a lot of man-power, particularly for the junior officers. The border drills and various taskforces, the junior officers are already preoccupied with that, so we really don’t have enough personnel to do these jobs.

So, the rest of the challenges are things we’ll summon and working with the other agencies of government to be able to summon them. We operate in different environment, we have different challenges and you know for every controller, your performer would be your understanding, of what challenges lies ahead of you; which environment to operate, what resources to draw on. It is how every controller understands it and is able to manage these, that will determine the kind of outcome!!

I am lucky that I’m working with officers who are experienced and very versatile; and together we are able to sit down and bring up strategies that produce this kind of results!

I have always known that you need to approach everything as a team. You need to leverage on the strength of your different teams. So, it is about working together internally, it is about identifying the strong point that you can leverage on, on all the other agencies.

Before I came here, I was told different stories of how difficult the Airport Authority was going to be; lots of things were being said, You can’t do this; you can’t get this card; But the second day I came in here, I got my own DC card that gave me access to everywhere at the airport. I got the management of the Airport to agree that they will restructure my office to give me a private convenience; we got cards for all our officers that are transferred here. So, we had very good working relationship with them, because I made the airport authority to believe that we will leverage on the strength of each other and that we are not coming here for any form of competitions; and this is very very import: that we were not here to compete with any agency of government, because at the end of the day, the objectives of all of us working in this kind of airport is same. 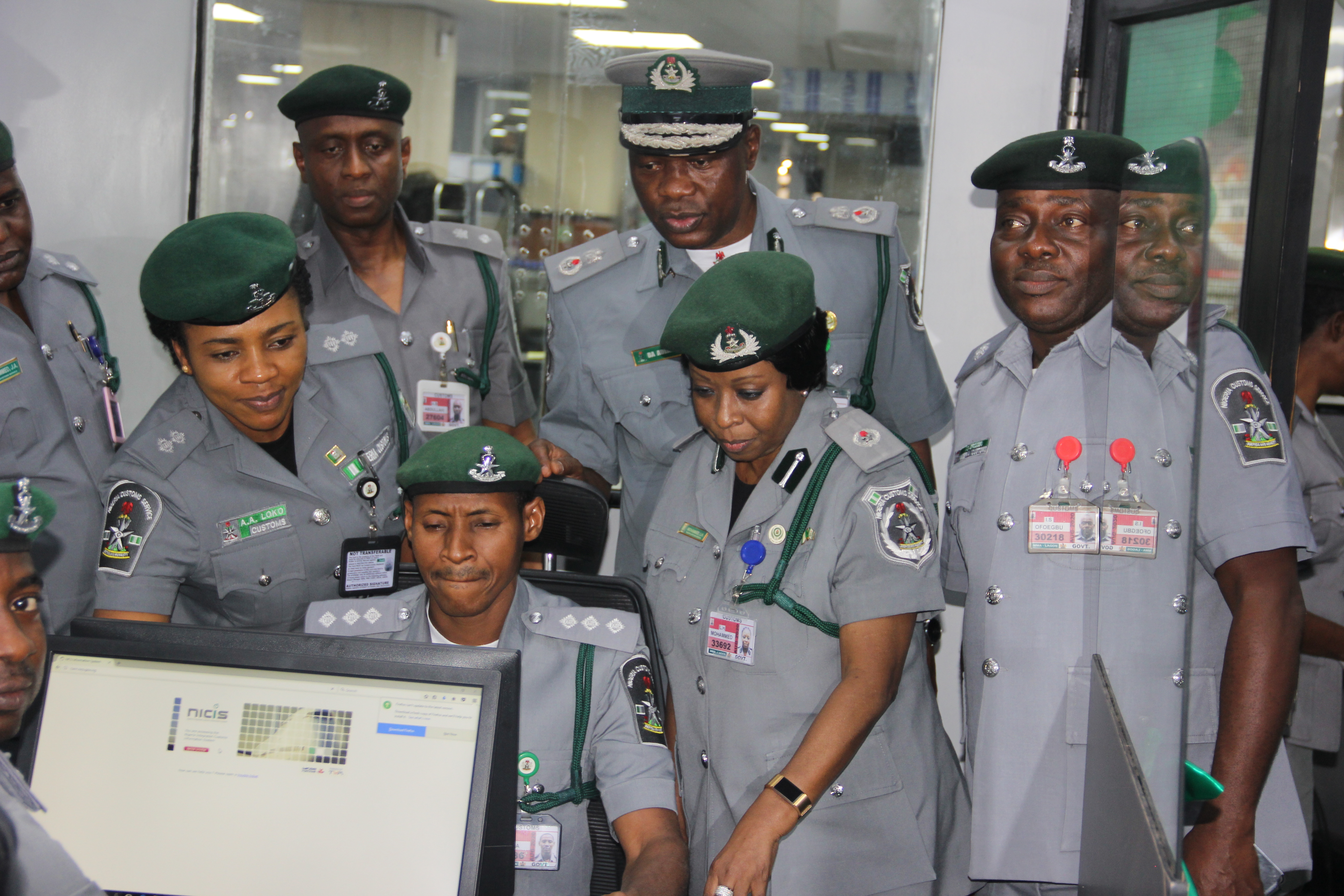 The objective is either because this as an airport to regulate air travels, create good passenger experience for travelers, create a user friendly airport, make sure revenue and taxes that are supposed to come, come to accrue to every government, assist the regulators in ensuring that aviation laws are kept and things like that.

So when you look at the total objective, it is all to enhance national security, enhance the prosperity of the country and things like. And when you come in with a vision like that to key into that general vision not that you tell them: ‘Oh, I am from a different standpoint and dictate what happens’, then you are bound to get results.

So, this is what is happening. 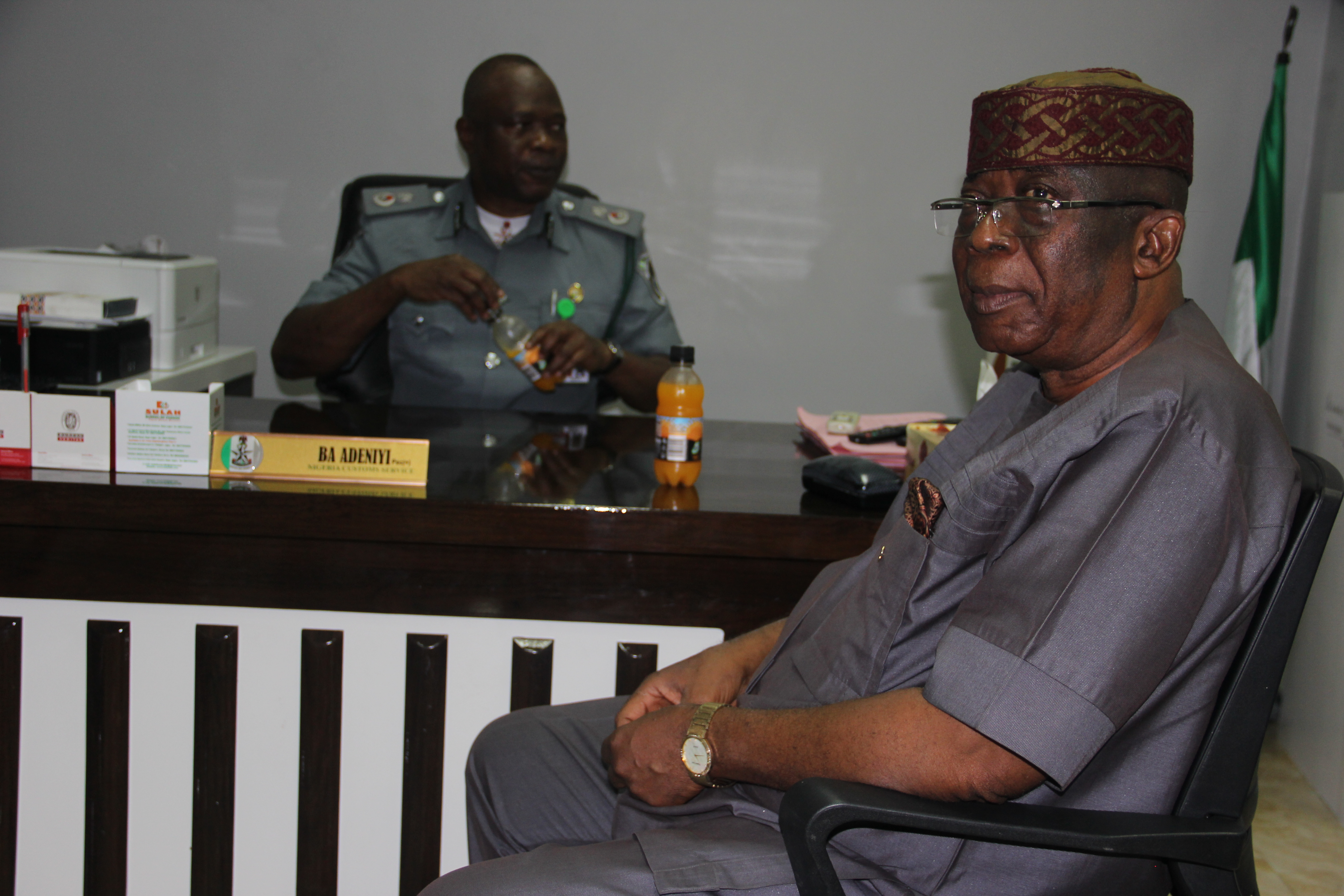 What advice would you give your colleagues operating in newly created Customs Commands?

What I will encourage and advise my other colleagues to do is to also ensure that they work with other agencies of government, that we’ve been working with, synergize with them and they will get the best results!