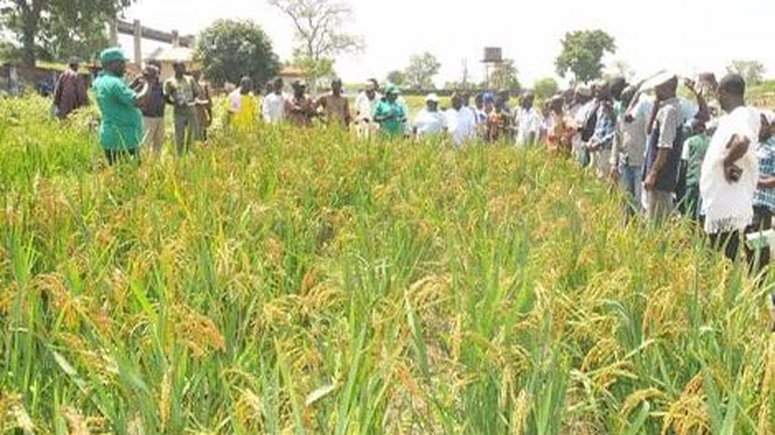 A total of 40, 000 registered farmers under the Rice Farmers Association of Nigeria (RIFAN), in Kano state will benefit from the Anchor Borrowers’ Programme during the 2020 dry season farming.

Alhaji Ado Hassan, the state’s  RIFAN Secretary, disclosed this to the News Agency of Nigeria (NAN), on Monday in Kano.

He said the association had concluded arrangements for the distribution of fertilizers and other inputs to the farmers next week.

According to him, each of the beneficiaries will collect fertilizers, certified seeds, water pumping machines, sprayers, herbicides as well as empty bags for storing their commodity after harvest.

He explained that the farmers were expected to collect the items as the total package of the loan for cultivating one hectare, while those cultivating two to three hectares would receive the package commensurate with the size of their farm.

He said the association also intend to offer tractor hiring service to the beneficiaries at subsidised rates of between 25 per cent and 30 per cent.

“We have 20 tractors on ground and we are also expecting 30 more as they are on their way to Kano.

“So, we intend to assist our members with the tractor hiring service by charging them less than the normal rates charged by private owners,” he said.

Hassan said the number of farmers to benefit from the programme this year was higher than those that benefited in 2019.

“No fewer than 7, 000 or 10, 000 registered women rice farmers out of the total number of beneficiaries will partake in the irrigation activities this dry season farming.

“During the 2019 irrigation season, only 25, 000 rice farmers were able to access the Federal government’s intervention under the Anchor Borrower Programme,” he said.

In the meantime, the Enugu State Government says it has concluded plans to train 120 farmers in the state on how to grow vetiver grasses to control erosion on their farmlands.

Mr Benjamin Onuze,  Ag. Director,   Technical Services, Enugu  Ministry of Agriculture disclosed this in an interview with the News Agency of Nigeria (NAN) on Monday in Enugu.

Onuze explained that a total of  20 farmers from each of the six agricultural zones in the state would be trained on the techniques involved in the planting of the grass.

According to him, the vetiver grass is a tall perennial grass which had been used in a variety of soil and water conservation applications.

“Many grasses and trees have been tried over the years as measures to prevent erosion in many farmlands; only vetiver grass has stood the test of time.

“Result has shown vetiver grass to be very successful in reducing flood velocity and limiting soil movement,” he said.

He noted that  it had a strong fibrous root system that penetrated and bound the soil to a depth of up to three metres and could withstand the effects of tunneling and cracking.

Onuze explained that  it would go a long way to protect crops from any form of destruction by erosion, thereby, increasing the quantity of produce.

“Vetiver grass is a climax plant, therefore, even when all surrounding plants have been destroyed by drought, flood, pests, disease, fire or other adversity, it will remain to protect the ground from the onslaught of the next rains.

“It is known to grow in areas with average annual rainfall and with temperatures ranging from 9°C to 45°C.

“The grass is planted as a hedge along the contour of the farmlands,” he said.

According to him, vetiver grass is a tropical plant, which can be sourced from the International Centre for Tropical Agriculture, Ibadan.