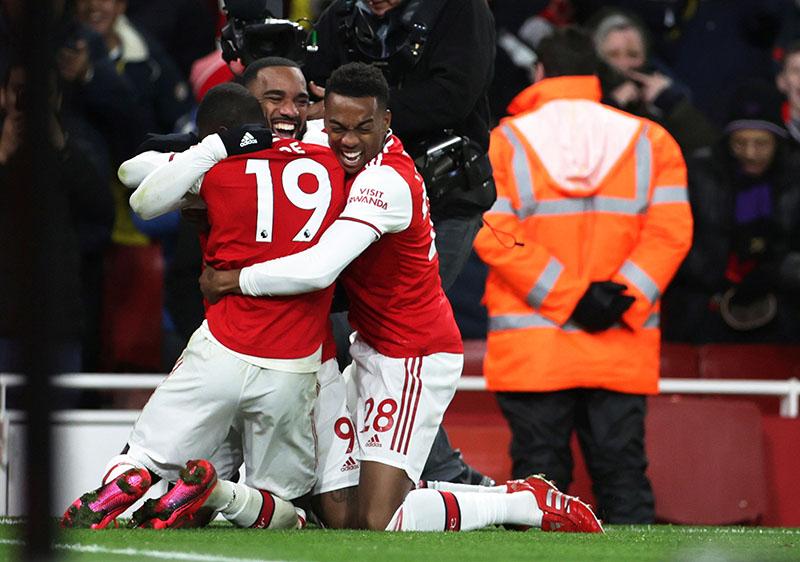 Substitute, Alexandre Lacazette ended his goal drought as Arsenal secured their first Premier League win since New Year’s Day with a 4-0 victory over Newcastle United at the Emirates Stadium on Sunday.

Lacazette had gone nine games in all competitions without a goal before he found the target with a mis-hit shot in the final moments of the game.

The win moves Arsenal up to 10th position and will give them hope they can make a late push towards European qualification for next season.

After a goalless first half, Pierre-Emerick Aubameyang put the Gunners in front with a powerful header from a Nicolas Pepe cross.

Pepe himself added the second, from close range after good work from the impressive Bukayo Saka.

Newcastle had opportunities to get back in the game with Allan Saint-Maximin hitting the post and Ciaran Clark missing a great chance from close range.

But Mesut Ozil put the game beyond the Magpies with his first goal of the season with a tap-in after a flowing Arsenal move involving 35 passes and touches from all 11 players.

It was the most passes for any goal in the league this season.

Lacazette, left on the bench with youngster Eddie Nketiah, finished off a smart move for Mikel Arteta’s side, who recorded just their second win since the Spaniard took over at the club.

“We wanted to put draws into wins and the home form is going to be vital.

“It was a little bit slow and you can get frustrated but we started to manage the game better after 25 minutes, had a talk at halftime and improved in the second half.

“In the final third we were poor in the first 25 minutes,” Arteta said.

The defeat ended an eight-game unbeaten run for Newcastle and left manager Steve Bruce surprised with their defending.

“I didn’t see that coming in the second half. We gave bad goals away which isn’t like us.

“We usually don’t give much away. When that fourth goal happens you think it wasn’t our day,” Bruce said.

In another development, the Rangers International Football Club of Enugu on Sunday had their six-match unbeaten run halted by visiting Akwa United FC of Uyo after a 2-1 defeat at the Nnamdi Azikiwe Stadium.

But their lead lasted until the 56th minute when Kenechukwu Agu equalised for the Flying Antelopes.

Akarandut Orok however restored the lead for Akwa United in the 72nd minute, which they held on to until the final whistle.

Speaking after the match, Orok said his team prepared well for the match.

“I feel great scoring the winning goal, because it is always painful to score and your team lose at the end.

“But scoring one of the goals that gave us victory today is what matters a lot and I hope to continue scoring for my team.

“We knew that it was going to be tough as we played a draw with them at home. So, we raised our game today,” he said.

Orok said he and his teammates took it as a challenge after they lost four points at home in their last two matches.

“The players agreed to fight for points at away to make up for the points lost at home and thank God we got it right in Enugu against one of the toughest teams.

“It was a good win for us as it will push us up on the NPFL table and we will keep fighting till the end,” he said.

The win lifted Akwa United to the fourth position on the log after 32 points from 21 matches.

Rangers dropped to the 17th position with 20 points after 16 matches.