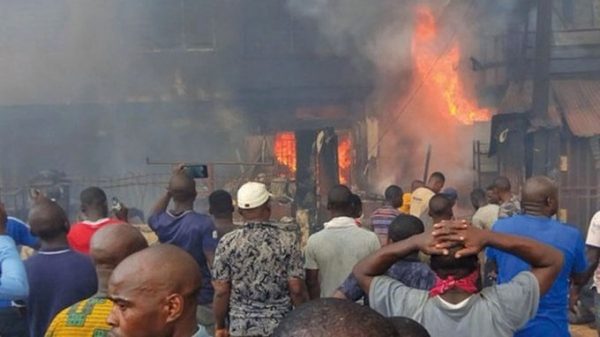 The Director-General, Lagos State Emergency Management Agency (LASEMA), Dr Olufemi Oke-Osanyintolu, confirmed on Sunday, that not fewer than eight shops were destroyed by a fire outbreak in Apongbon Under Bridge Market in Lagos on Sunday.

Oke-Osanyintolu indicated this at the scene of the fire incident in Apongbon, Lagos, noting that, upon arrival of the LASEMA Response Team to the scene of the incident at 10:35 a.m. on Sunday, it was revealed that the fire emanated from one of the containerised stores in the market.

He said that the incident happened few minutes after 10 a.m. on Sunday, saying that the cause of the fire, which spread into other shops, could not be ascertained.

Oke-Osanyintolu noted that the fire destroyed eight shops in the market includ the goods.

“Efforts by the Lagos State Fire Service and LASEMA Response Team to combat the inferno were successful.

“The fire has been contained and Lagos residents are urged to remain calm,’’ Oke-Osanyintolu said.

He, however, said that the fire-fighting operations had been concluded while recovery and post-fire assessment were ongoing.

The LASEMA Response Team arrived the scene of the incident on time and stopped the fire from extending to the overhead bridge leading to Apongbon /Marina road.

Also read:  One dies as fire razes house in Modakeke

Meanwhile , the curtain has been drawn on the third edition of the Edo State Sports Festival with a total of 1, 602 medals won by athletes at the end of the six days sports fiesta.

The festival which last held in 2002, took place in eight centers in the capital, Benin, with the University of Benin sports complex playing host to the opening and closing ceremonies.

Ikpoba-Okha, Owan West and Egor Local Government Areas emerged first, second and third with a total of 240, 193 and 178 medals respectively.

While Ikpoba-Okha emerged the victor with 100 Gold, 82 Silver and 58 Bronce, Owan West came second with 74 Gold, 53 Silver and 66 Bronze medals, with Egor clenching the third position with 64 Gold, 60 Silver and 54 Bronze.

The sport fiesta was to select athletes that will represent the state at the 20th National Sports Festival, as well as discover athletes for future sporting events.

Gov. Godwin Obaseki had promised N5 million reward to the overall council area, while the second and third will go home with a prize of N3 million and N1 million respectively.

The governor also promised that the sports festival would be sustained.

“It has taken 19 years to hold another sport festival in the state, from now on, it is going to be an annual event and we are going to synchronize it with our sport calendar,” Obaseki said at the opening ceremony.

He said it was in a bid to revive sports in the state that his administration invested much in the reconstruction of the Samuel Ogbemudia Stadium and 20 new stadia across the 18 council areas.

No fewer than 700 athletes drawn from the 18 Local Government Areas of the state participated in the sports festival.

About 300 officials also officiated in 36 sporting events during the one week sports fiesta which ended on Saturday.

At the closing ceremony, the Deputy Governor, Philip Shaibu, said the festival has officially launched the rebirth of sports in the state.