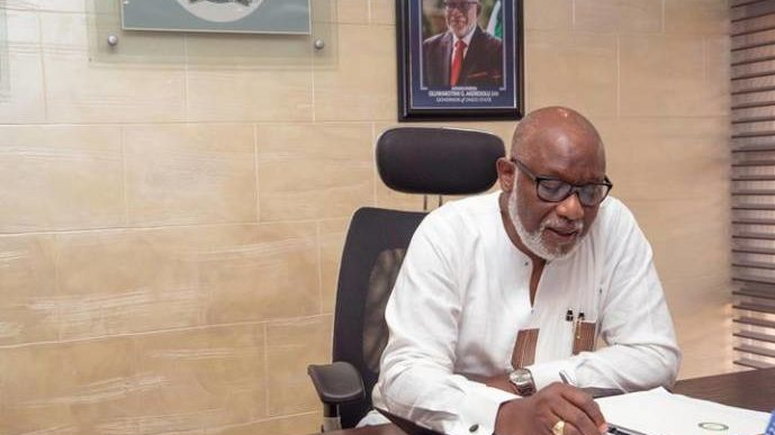 Gov. Oluwarotimi Akeredolu of Ondo State on Monday announced an increase in the Internally Generated Revenue (IGR) of the state from N750 million to N2.2 billion monthly since the inception of his administration.

He explained that the revenue was hovering between N650 and N700 million, adding that it had grown to about N1.5 billion by 2018

The governor also advised the new staff to be competent revenue employees while working together as a team to further raise the IGR.

“Be contented with your work, you will be well renumerated. You must bring character into this service,” he said.

Earlier, the Chairman of ODIRS, Mr Tolu Adegbie, had commended the governor for his drive in the growth of IGR in the state.

He said that the governor, in his passion, was always present in the monthly performance review on IGR.

Adegbie further said the first batch of 241 new employees in 2019 had greatly improved the IGR while the impact would be felt with an increase later year in the year.

In the meantime, the Minister of Finance, Budget and National Planning, Hajiya Zainab Ahmed, on Monday in Lagos called on states to consider Internally Generated Revenue (IGR) as a critical instrument of funding.

Ahmed said this would help in blocking leakages and ensure effective and efficient collection of revenue.

The minister said this at the opening of a three-day retreat of the Federation Account Allocation Committee (FAAC) with the theme: “Efficient Federation Revenue Allocation as a Nexus for National Economic Diversification.”

She said that the introduction of State’s Fiscal Transparency, Accountability and Sustainability (SFTAS) in partnership with World Bank was to strengthen fiscal discipline and financial stability.

The News Agency of Nigeria (NAN) reports that FAAC retreat is held every two years as part of the governance framework with the main objective of exposing new members to the workings and dynamics of the Committee and refreshing the memories of existing members.

The minister assured that the Federal Government was ready to help in lifting millions of Nigerians out of abject poverty by partnering with states and all other relevant stakeholders.

She said this would bring about sustainable development and improve welfare of the citizenry.

Speaking on the over-reliance on income from the federation account by governments as not only risky but also unsustainable, the minister stressed the need for the tiers of government to look inwards toward generating more revenue from internal sources.

“We must give serious consideration to diverse sources of revenue at national and sub-national levels with a view to deploying appropriate measures to plug leakages and ensure efficiency and effectiveness in revenue collection.

“Though the conduct of economic policy is a shared responsibility of the three tiers of government in Nigeria, we must collectively sustain efforts to build a virile and stable economy.

“The states should imbibe the culture of peer learning among themselves as a way of ensuring continuous performance improvement,” she said.

Ahmed noted that the Finance Bill 2019 was a legislation to remove deficiencies in tax laws by amending obsolete and contentious laws, saying it sought to promote fiscal equity.
She added that the bill was to align domestic laws with global best practices and boast revenues and investments in both public and private sectors.

“The Finance Bill alongside the Strategic Revenue Growth Initiative (SRGI) and other initiatives being introduced by government will enable it to significantly diversify and improve revenue generation.

“It will help toward achieving the target of revenue of GDP of 15 per cent in medium term,” she said.

The minister assured that the federal government would continue to pursue its plans to encourage investment in industries and agriculture through the implementation of sustainable trade policies to enhance domestic production in order to curtail imports.

Gov. Babajide Sanwo-Olu of Lagos State, while declaring the retreat open, called for the creation and boosting of new sources of export in Nigeria’s bid to meet the increasing demand for public goods by Nigerians.

Represented by the Deputy Governor, Dr Obafemi Hamzat, he urged state governments to explore ways of reducing dependency on what comes from the federation account on monthly basis by adopting creative and strategies to boost IGR.

“Lagos deserve a special status funding; Lagos shoulders a heavy burden which, if not properly discharged, posses great danger to the attainment of our national economic growth aspirations.

“Lagos needs help in order to meet the challenges of half a million people migrating into the metropolis daily,” he said.

According to the governor, the new revenue formulae should take cognisance of population density in addition to nominal population while also increasing Lagos share of VAT.

He described Lagos getting 10 per cent of VAT while contributing 55 per cent as “inequitable.”

Earlier in his address of welcome, Chairman, Forum of Commissioners for Finance, Mr David Olofu, said the choice of theme was informed by the continued relevance of national economic diversification to the survival of our country.

He said there was a need for a synchronised, consistent and sustained effort at all levels to diversify the economy and provide opportunities for our people.

He noted that it could only be achieved when available resources were used to create and unlocking existing potentials.

“FAAC is held monthly basically to distribute accrued federation revenue to the three tiers of government and as representatives of our respective tier of government.

“It is our responsibility to ensure that the distribution is done in line with established indices and that the remittances are carried out as distributed at the meeting in addition to other matters that affect the financial wellbeing of the federation,” he said.