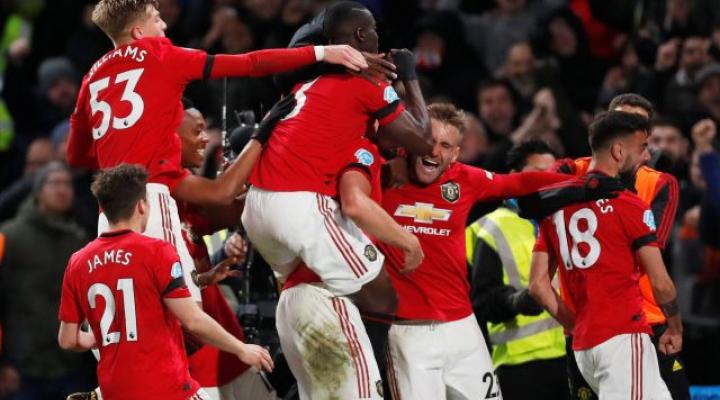 In a high tempo, if often scrappy game, Ole Gunnar Solskjaer’s Manchester United side made the most of their chances.

But Chelsea, whose form at home has been suspect all season, squandered a string of opportunities.

A fine glancing header from Anthony Martial just before half-time from an Aaron Wan-Bissaka cross put the visitors ahead.

Chelsea had two goals ruled out by the Video Assistant Referee (VAR).

Kurt Zouma scored from a corner kick in the 54th minute but there was a push in the area.

Substitute striker Olivier Giroud’s headed effort in the 77th minute was cancelled when he was adjudged marginally offside.

The loss left Chelsea fourth, a point clear of resurgent rivals Tottenham Hotspur led by their ex-coach Jose Mourinho and who they host on Saturday.

In the meantime, Paris St-Germain (PSG) forward Neymar is expected to play on Tuesday against Borussia Dortmund in their UEFA Champions League last 16 first leg tie after overcoming a rib injury.

The Brazilian did not play in the club’s 4-4 Ligue 1 draw at Amiens over the weekend when Tuchel rested some other players.

“He is here (in Dortmund). He will train and if all goes well he will play tomorrow (Tuesday). Because for us it changes almost everything when he plays and I hope he will play,” said Tuchel.

PSG have been knocked out at this stage in the past three seasons and are desperate to leave a mark on the competition.

“(Neymar) changes everything because if he plays we have his quality and confidence and ability to do (the) decisive.

“It changes everything… because if he does not play we have no other player with that quality to replace him.”

Tuchel, who coached Borussia Dortmund for two seasons before going to Paris, will need to devise a plan to stop the Germans’ formidable attack.

They have scored 22 goals in their five Bundesliga games this year.

“It is absolutely necessary to play with a lot of confidence in this stadium with such fans and such an opponent. Otherwise, you cannot survive,” he added before the clash at Signal Iduna Park.

“We have the team spirit to overcome difficult situations, adapt to different scenarios. That’s the key.”

PSG are under extreme pressure to finally deliver in Europe after spending big money on players in the past few seasons to build a winning squad.

They came agonisingly close to a quarter-final spot last year only to be eliminated by Manchester United with a stoppage-time penalty kick in the second leg.

“If you lose in the round of 16 for three years and you arrive for a fourth time it is clear it is not the same situation,” Tuchel said.

“Every year has its story and maybe we have to accept that it is sport. There are doctors, much more important professions, we play sports but it happens that you lose.

“Maybe later we can breathe a bit easier. We are here and it is important to make the most of it.”