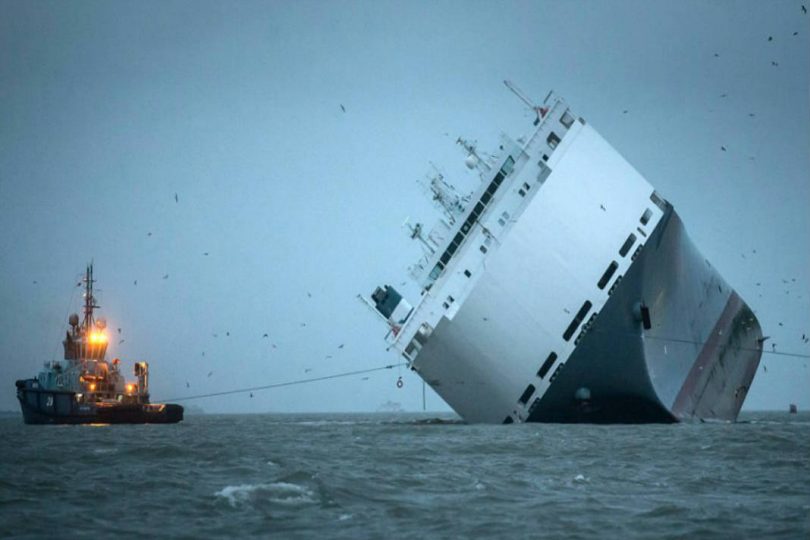 …As Peterside says Piracy, other maritime crimes issues are of global concern***

A Cargo ship, SHENZHOU 19 sank early in the morning Feb 17, resulting in the death of three crew, north of Zhoushan, while the vessel was en route from Shanghai to Guanzhou, China.

The Maritime First learnt that during the spirited Search and Rescue (SAR) exercise that followed, three crew were rescued, but all of them died from, understandably, hypothermia.

Three others have however been declared missing, a development which forced SAR efforts to continue.

Those missing were yet to be found even as at February 19.

In the meantime, the Director General, Nigerian Maritime Administration and Safety Agency (NIMASA), Dr Dakuku Peterside on Wednesday identified piracy, armed robbery at sea and other maritime crimes as issues of global concern.

Peterside who spoke at the 9th Admiralty Law Seminar for Judges in Lagos, also noted that adequate sensitization of judges on the Suppression of Piracy and other Maritime Offences (SPOMO) Act 2019 would aid its implementation in the country.

The seminar, organised by NIMASA in collaboration with the Nigerian Institute of Advanced Legal Studies (NIALS), had the theme: Suppression of Piracy and other Maritime Offences (SPOMO) Act 2019: Keys to Accelerating and Achieving Safe and Secure Shipping.

Peterside said that the seminar, instituted by NIMASA in 2009 for judges, afforded a unique opportunity for the judiciary and the agency to dialogue on issues of mutual importance to both sectors and the country in general.

One of the key deliverables, according to him, is the sensitisation of judges on contemporary maritime law issues both within and outside the Nigerian jurisdiction, considering the multijurisdictional nature of shipping.

“Also, with the world’s waters accounting for over 80 per cent of transportation requirements in the global trading supply chain network across established international routes and trade lanes, the threats of piracy, armed robbery at sea and other maritime crimes have been an issue of global concern.

“The Gulf of Guinea, sadly, had been at the epi-centre of maritime security discussions globally, given the incidents recorded in the region, and challenges of maritime insecurity in the region have been further compounded by a deficit of legislation to address the challenge.

“With the signing into law by Mr President on June 24, 2019 of the SOPOMO Act, facilitated by NIMASA, there is now a robust and detailed framework in place for the criminalisation and punishment of piracy and other maritime crimes in Nigeria and the Gulf of Guinea,” he said.

Peterside noted that his expectation was for better understanding of the provisions of the act, and in the implementation, all parties would be equipped to play their roles, ultimately with the view to reducing criminality on the waterways.

He said that apart from the legal framework, NIMASA was also investing in infrastructure and assets, building human capacity and putting in intervention measures to keep the people off piracy.

The director general said that it was only a matter of time before the country would start reaping the benefits of the investment that was being established.

“I feel terrible every time I hear of one attack or one incident, either successful or not, and government at the highest level are most supportive to fight this menace,” he said.

Prof. Mohammed Ladan, DG NIALS, said that this year’s theme was borne out of the coming into force of the first stand-alone anti-sea piracy and maritime crimes law in the Gulf of Guinea.

He said that it was aimed at stemming the tide of acts of sea piracy and armed robbery and other challenges of maritime safety and security that hamper sustainable economic growth and development of all the territorial states in the region.

“In addition to human costs, the Gulf of Guinea experienced an escalation of piracy, kidnapping and armed robbery at sea incidents in 2018 and 2019.

“Through this strategic maritime law seminar, we wish to enhance the capacity of, and remind our justice sector actors that we will all prosper when the seas around us are safe and secure,” Ladan said.

He said that timeliness in justice dispensation were critical to realising the potential of the maritime sector.

According to him, this will enable investors trust the judicial process, as the more time taken on a case, the more investment opportunities are lost.