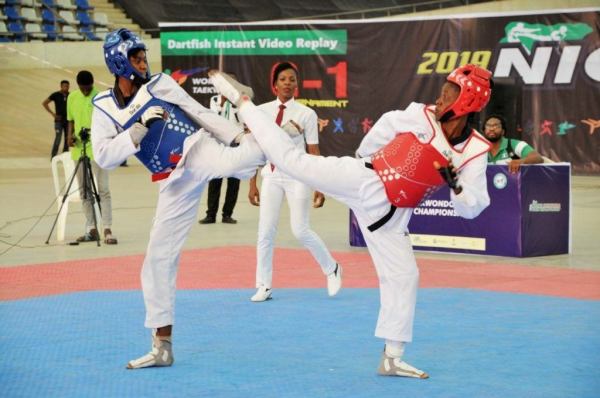 National taekwondo team captain Chinazum Nwosu on Thursday assured that the team would pick tickets to the 2020 Olympics at the Africa Qualification Tournament in Rabat, Morocco.

Nwosu told the newsmen in Abuja, ahead of the team’s departure to Morocco Thursday, that the athletes were fully ready to perform and excel.

NAN reports that the team left Abuja on Thursday after an initial postponement of its scheduled departure due to a delay in release of funds.

The contingent was expected to arrive just in time for the qualifiers which runs from Friday to Monday.

Nwosu, who narrowly lost out on clinching a Rio 2016 Olympics ticket, is hopeful for different results in Rabat where she won an African Games medal in 2019.

She said the team had prepared well for the tournament and expressed confidence in the team doing the country proud.

“As captain of the team, I know 100 per cent that the team is ready and we are very focused on qualifying for the Olympics,” Nwosu said.

On his part, Okuomose said his aim was to go a step further in the sport by qualifying for the Olympics.

The African Games bronze medalist and national champion said his participation at the Fujairah Open recently had boosted his confidence for the qualifiers in Rabat.

“I do not feel any tension and I am very ready to make Nigeria proud. I just have to stay focused,” he said.

Also, Anyanocho said the support from the Nigeria taekwondo community had been very helpful.

“My mind and body have undergone serious training. So, I believe I have prepared enough. I will like to thank members of the Nigeria taekwondo family for their kind words and encouragement,” she said.

Ifeoluwa Ajayi, Nigeria International Open gold medalist and current national champion, acknowledged that the team would be up against the best at the qualifiers.

“But I am optimistic about the team’s chances. We will definitely deliver.’’

Earlier, Margaret Binga, the President of Nigeria Taekwondo Federation (NTF), had said she was glad the team had departed for the Olympic qualifiers after the initial delay.

She said the team was well prepared for the tournament and assured that Nigeria’s flag would be hoisted at the taekwondo event of the Tokyo Olympics later in the year.

The tournament will have 105 participants, made up of 63 male and 42 female from 36 countries.