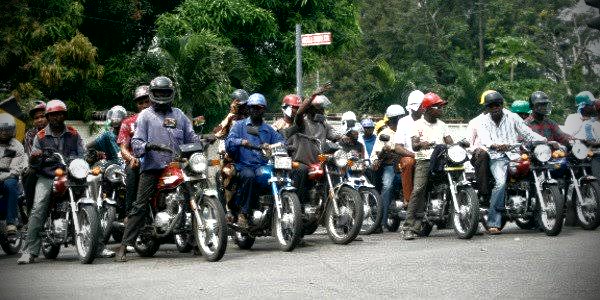 The Oyo State Government will soon issue identification card for every motorcycle (okada) operator across the state as part of measures to check crimes and influx of bad elements into the state.

Prof. Raphael Afonja, the Commissioner for Public Works and Transport, made this known in Ibadan on Thursday while addressing newsmen on government’s plan to ensure smooth commercial motorcycle business in the state.

Afonja also announced that Gov. Seyi Makinde had ordered the immediate reduction of the daily levy paid by each motorcycle and tricycle operator in the state from N200 to N100, to ameliorate the suffering of the riders.

He noted that Gov. Makinde did not want to add to the burden of the people of the state.

“This will enable the government to differentiate registered commercial motorcyclists from criminal elements, who are using motorcycles to operate.

“We have concluded that due to what happened in Lagos State, which has led to influx of okada riders moving from Lagos into Oyo State. There is a need to have okada riders’ card to identify people coming into the state.

“So, in collaboration with the revenue collector for the state and FRSC and the unions, we will start to gather information on those who are engaging in commercial or private cycling businesses in the state.

“This is possible through profiling. The security agencies are in need of these pieces of information.”

According to him, this registration of motorcycle operators through the riders’ cards will be a database for us to know who is who; who owns what; who they are, where they live and the rest.

“We will also add their Bank Verification Number (BVN) to know who they really are.

“Recently, you may have heard about snatching of bikes and robberies using motorcycles. That is why we are trying to make sure that all motorcycles in the state are properly registered.

“We will ensure they do what is needful to make sure they obey the law,” Afonja said.

The commissioner explained that the Riders’ card would afford the government the opportunity to have a database of the riders across the state.

On the daily levy collection of N100, Afonja said revenue collectors would be at every park from Friday, Feb. 21.

He urged commercial motorcycle and tricycle operators to cooperate with the revenue collectors.

In a related development, the Kwara State Government has initiated issuance of Identification Cards (IDs)and uniforms for commercial motorcycle operators as security measures to curb crimes in the state.

The state Commissioner for Works, Mr Suleiman Rotimi, made this known on Thursday in Ilorin during a meeting with commercial motorcycle operators better known as “Okada” riders in the state.

Rotimi said that the measure became necessary sequel to the influx of motorcyclists from other states into Ilorin and other towns.

He said that part of the security strategies adopted was the introduction of new single uniforms, IDs with bar codes and stickers to enhance easy identification and planning.

Rotimi listed other security measures to include census and registration of commercial motorcycle operators to ascertain their population in the state.

The Commissioner stressed the need for prompt payment of road tax and urged the riders to fashion out a realistic amount and mode of collection.

He reiterated government commitment to collaborate with financial institutions to facilitate social investment scheme in form of loans that would further boost transport services in the state.

Also speaking, the Permanent Secretary in the ministry, Mr Yusuf Manjo, commended the joint motorcycle union for accepting the proposal for introduction of a single uniform, stickers, IDs/bar codes.

Manjo assured that necessary mechanism would be set in motion to make the proposal a reality within the shortest possible time.

He urged them to embrace the proposed road tax as highlighted by the commissioner, which he described as a statutory payment meant to be collected from the riders by the state government

Responding, the President of Joint Motorcycle Riders Union, Mr Gabriel Ajewole thanked the commissioner for the warm reception and listening ear accorded them.

Ajewole expressed the union’s readiness to abide by the single uniform and road tax payment proposed for the riders in the state.

He also advocated measures to check the influx of illegal motorcycle operators in Tanke Oke-Odo and other areas to forestall security breaches in the State.