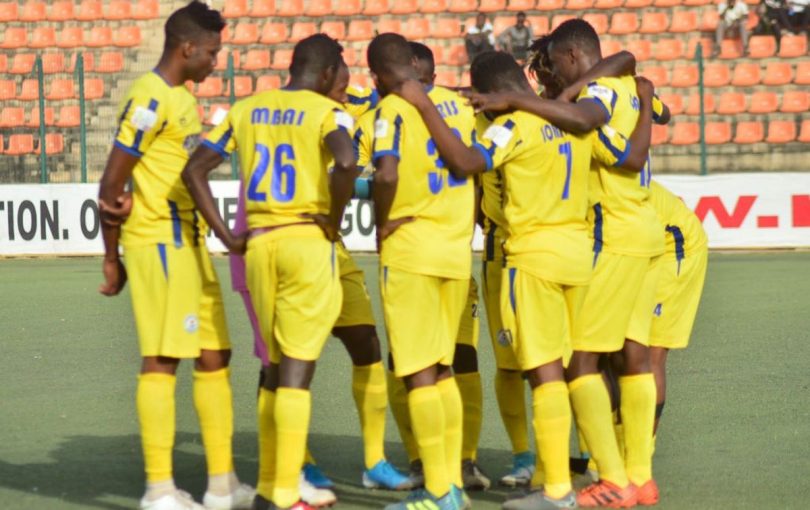 …As Neymar sent off, though shaky PSG beat Bordeaux in Ligue 1***

Jibrin Abubakar and Idris Abubakar scored for the hosts in the match’s 12th and 69th minutes respectively at the Pantami Stadium in Gombe.

The visitors scored their lone goal through Ikenna Cooper in the 67th minute.

Reacting to the result, Ibrahim Bariki, the coach of Adamawa United, said his players did their best and he was satisfied with the win.

While expressing disappointment with the officiating of the match’s first half, Bariki said: “I was not angry. It’s just that in the first half, the referee was trying to intimidate us.”

On his team’s poor away record, the coach said he and his colleagues in the team’s technical crew were working very hard to improve that aspect.

Also speaking, the coach of the visiting team, Uche Ukagbue who commended the officiating, said he felt “very bad’’ that his team’s goalkeeper gave away two cheeky goals.

The home fans also threw sachet water and shoes at match officials as policemen escorted them into their dressing room.

The incident delayed the commencement of the second half by 15 minutes as the players had to wait on the field of play for the match officials.

Speaking on the home fans’ attitude, Okagbue said their reaction was part of football.

“Fans are not educated. They don’t know the rules and laws of the game, and that’s why they act unnecessarily.”

Meanwhile, the Paris St-Germain (PSG) extended their Ligue 1 lead to 13 points with a 4-3 victory against Girondins de Bordeaux on Sunday.

But it was a match in which the French champions were again exposed at the back and had Neymar sent off.

A Marquinhos double, Edinson Cavani’s 200th PSG goal and a goal by Kylian Mbappe put the capital side on 65 points from 26 games.

But they lost team captain Thiago Silva to a muscle injury and Neymar picked up a straight red card for a late challenge in stoppage time.

Bordeaux, who scored through Hwang Ui-jo, Pablo and Ruben Pardo, are 12th on 35 points.

Five days after losing 2-1 at Borussia Dortmund in a UEFA Champions League last 16 first leg fixture, PSG did little to reassure their fans.

The players had “Stay Strong China’’ written on their shirts to show their support for the victims of the coronavirus that has killed more than 2,000 people in China.

In a tough first half, Silva limped off the pitch in the 16th minute with a muscle problem and was replaced by Idrissa Gueye.

Hwang headed home from Nicolas de Preville’s corner as the PSG defence were caught off guard in the 18th minute.

They increased the pressure and Cavani hit the woodwork before Mbappe forced Benoit Costil to make a superb save at the half hour.

Marquinhos deflected Di Maria’s free kick with his shoulder to put the home side ahead three minutes into added time in the first half.

Pablo equalised one minute later in farcical fashion, after second-choice Sergio Rico’s clearance from Marco Verratti’s backpass bounced on to Pablo’s knee and into the goal.

PSG, however, accelerated after the break and Marquinhos put the French champions ahead after 63 minutes, poking home the ball after Costil had parried a Cavani header into his path.

Six minutes later, Mbappe doubled the advantage from close range after being set up by Cavani.

PSG were kept on their toes until the final whistle as Pardo found the top corner with a superb strike seven minutes from time.

Neymar was then sent off for a late and rough challenge on Yacine Adli.