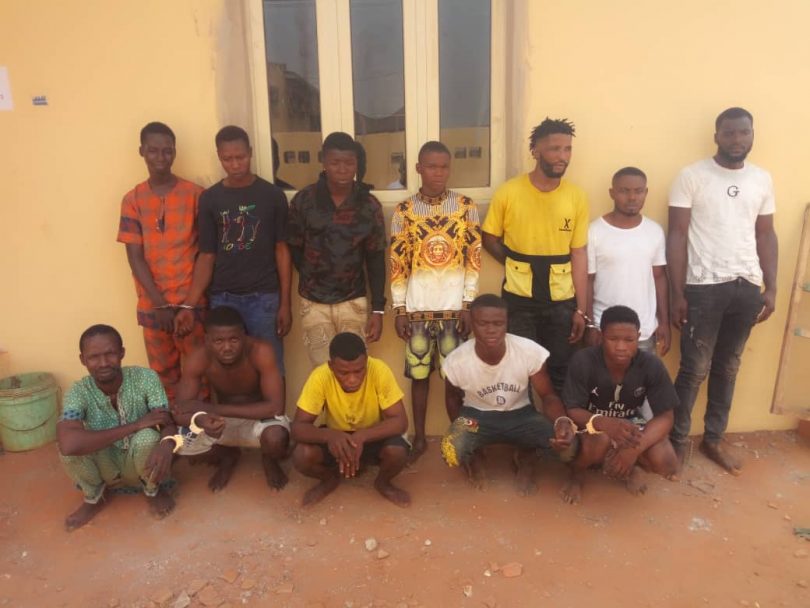 There was pandemonium in Ijora on Friday 21/02/2020 as two rival cultist group fought for supremacy, armed with cutlasses and other dangerous weapons.

Eye witnesses said the afternoon brouhaha started at Iso Isu area of Ijora Badia around 1420hrs, not too long after the Jumaat Service, and caught weekenders scampering for dear life; resulting in severe degree of injuries on gang members, until the Police from Ijora Badia Police Station arrived the scene.

Confirming the development, the Lagos State Police Command spokesman, DSP Bala Elkana said their war was only contained by the intervention of Police operatives from Ijora Badia Division and Special Strike Force on Social Miscreants from the Command Headquarters, Ikeja, who were timely mobilised to the area.

“They belong to Aiye and Eiye confraternities”, the PPRO said.

In a related development, on 23/2/2020 at about 1100hours, Ikorodu Police Station received an information that members of Aiye and Eiye Confraternities attacked each other at Ladega area ikorodu and one Lateef Ganiyu Akinpelu a.k.a Eti ‘m’  24years old was seriously injured.

The injured person was rushed to General hospital Ikorodu where he is currently receiving treatment.

Speaking on the development, the Lagos State Police Command spokesman said 12 suspects were arrested; and he gave their names as: Ajayi Ibrahim ‘m’; Isiaka Abdullah ‘m’; Yusuf Balogun ‘m’ and nine others.

He highlighted that one locally made pistol was recovered; even as Investigation is ongoing.

Meanwhile, a notorious burglary gang leader was arrested and some stolen items recovered, after detectives from Ikorodu Police Station swooped last Friday at about 1300hrs on a serial burglar; one Ganiu Solomon ‘m’ 37 years old of No. 5 Okuku Street Ota-Ono Ikorodu.

He was arrested in connection with series of complaints received from residents of Ota Ono area, Ikorodu on incidents of burglary and stealing.

All the complains received indicated the same modus operandi, suggesting the fact that the crime is perpetrated by the same syndicate.

“The suspects mostly break into residential buildings when they notice that the occupants are not at home or must have slept. They pass through the ceiling and windows, removing the burglary proof on the windows.

“They are part of the items stolen from Nkiruka.

“The suspect confessed to the commission of the crime. Investigation is ongoing”, Elkana explained further, saying efforts wre being intensified to arrest other members of his gang.

In the meantime, police have confirmed a fire incident at Gregorian College, Ogidi by BORAC, before Tarzan juncton Nkpor in Idemili North LGA of Anambra State.

Police and other security agencies subsequently cordoned off the area to prevent hoodlums from taking advantage to loot while fire fighters battled to put off the fire.

Other emergency responders were said to have also focused on evacuating people from the building.

The Anambra State Police Command spokesman, SP Haruna Mohammed, said the cause of the fire was still unknown

“Cause of the fire is yet unknown but effort is ongoing to ascertain circumstances surrounding the incident”, the PPRO said, adding that investigation had begun though.