The National President, Association of Nigerian Licensed Customs Agents (ANLCA), Tony Iju Nwabunike on Tuesday highlighted that Customs brokers and freight forwarders had been the unsung losers, in the nation’s war against substandard cargo in the port.

He made the observation in Lagos at a Stakeholders’ brainstorming meeting in Apapa, organized by the Standard Organisation of Nigeria (SON), towards evolving synergy to curb influx of fake products in the country.

“Over time, the customs brokers have been victims of substandard importation by importers who, in some cases, failed to disclose to us the actual content or degree of compliance with extant rules like SON Confornmity Assessment Programme (SONCAP).

“You will also agree with me that the influx of these illicit products, in addition to being injurious to our national economy, also spells doom for our people. A proverb among the lgbos says ‘When a man throws a stone into the market, he does not know whether it is his mother or another close relation that would be hit by the stone’. 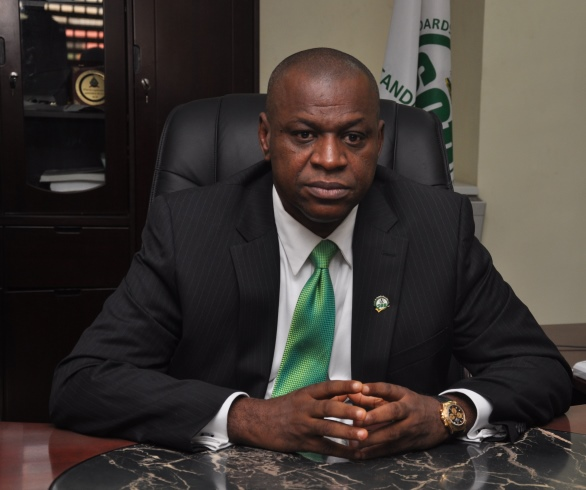 “In view of copious challenges faced in our line of business, we have taken it upon ourselves to educate importers on the need for their compliance to safeguard lives and avoid losses emanating from seizures and destruction of fake and substandard goods.

“This task is daunting, but we are not relenting because customs brokers have suffered an estimated cumulative losses amounting to over N20b in the last ten years for undertaking to clear goods discovered to be substandards”, Nwabunike stated, commending the SON for the stakeholders meeting and urging that meeting be made bimonthly.

“Let me put it clearly, that upon seizure of suspected fake or substandard goods after payment of duty, it will be easier for a camel to go through the eye of a needle than for an importer, whose consignments were seized to pay you the balance of the agreed sum even after the broker has spent his money on the logistics.

“This is just a mild analogy of the costly price we as professionals are paying to achieve standards and build an enduring economy that will be beneficial to all.

“These are just two examples of a routine activity that promotes quality in our country.

He lauded the SON for saving lives, and for consistently raising Nigeria flag high in the global standard community where over 164 countries converge under the aegis of Geneva based international Standard Organization (ISON).

“Under its present Chief Executive Officer Osita Aboloma, I can say that the bar is higher, even for the Nigerian Industrial Standards (NIS) which comes with the mark of quality for certified products.

We are aware that the Mandatory Conformity Assessment Programme

-A mandatory programme to which all locally manufactured products in Nigeria must comply with before the product can be allowed to be distributed to the market is presently being improved upon.

“While following SON’s activities, we have seen it close down or suspend production of non MANCAP compliant manufacturers. These efforts are outstanding and indeed very commendable.

“Bringing this stakeholders meeting to the port at a time when access to Apapa comes with inconvenience is another mark of resilience, commitment and selflessness on the part of SON.

“I won’t end this presentation without urging every one of us, either as individuals or corporate entities to join SON in the noble battle to instill standards and raise quality in all we import, manufacture, buy and sell”, he also said, imploring that SON’s laboratories be sited in the six geopolitical zones of the country, and to operate under a culture of due diligence, non compromise and efficiency, to justify Federal Government Investment on them for maximum positive results.

“As a way of contributing to the actualization of government’s ease of doing business and trade facilitation objections. I call on the Nigeria Customs Service to quickly integrate SON into its upgraded home grown technology platform, Nigeria Customs Information Systems (NICIS II).

“While we prepare to participate in intra African Trade under the banner of Africa Continental Free Trade Area, AfCFTA, agreement, let’s be reminded that good quality will be a key to penetrating new market frontiers in Africa.

“As a body of Customs Brokers, we are set to facilitate imports  and exports under the emerging AfCFTA regime. Let’s keep our eyes on the ball of quality all the time”, the ANLCA Boss stated, stressing the need for holistic attitudinal improvement, and promotion of ethics of compliance.

He tasked other sister agencies to take a cue from the SON in doing the needful, even as he praised the nation’s importers and exporters for the resilience and participation.