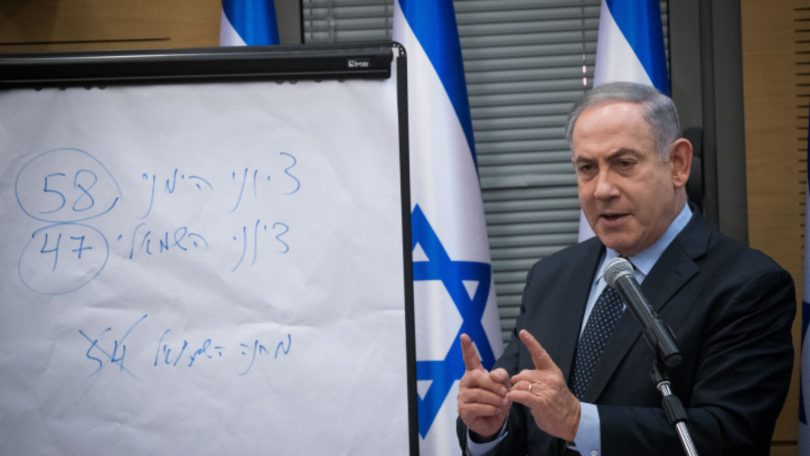 Benjamin Netanyahu’s opponents claim that the results of the three elections the country has held over the past 12 months have been essentially unchanged, with the embattled prime minister and his right-wing bloc repeatedly proving unable to muster a parliamentary majority. But the actual numbers from Monday’s election paint a completely different picture. Looking at them, one wonders just how many votes Netanyahu needs to win by for the entire electorate to declare his victory.

Netanyahu and his bloc received more votes than ever before, at the expense of Blue and White leader Benny Gantz’s anti-Netanyahu but ostensibly Zionist center-left bloc. Excluding the Arab parties, which are self-declared anti-Zionists, the pro-Netanyahu bloc defeated the pro-Gantz bloc by 11 seats. That’s compared to a gap of just three seats in the Sept. 17 elections—a dramatic increase in a 120-seat parliament.

The rise of the Arab parties

Another clear trend to emerge over the past 12 months is the steady gains made by Israel’s Arab Parties, which increased their representation from 10 seats in April, to 13 seats in September, to 15 seats now.  This increase is due to Arab voters that have never before participated in Israeli elections. These voters did not participate previously because they refused to acknowledge the Knesset’s validity, just as their Arab-party representatives have never joined a governing coalition since the establishment of the modern state of Israel.

By increasing to 15 seats, the Arab parties have diminished the available pool of pro-Israel MKs to only 105. Of those 105, Netanyahu’s bloc has 58, which is a clear majority encompassing 55 percent of the pro-Israel seats.

Had the Arab parties received five fewer seats, as they did in April 2019, those seats would have been proportionally distributed among the Jewish parties, and the larger right-wing bloc would likely have received three, enabling it to form a clear majority.

Also read:  Israelis have spoken and prefer Netanyahu, though hurdles remain on way to government

The Arab MKs have no intention of sitting in a government with either Netanyahu or Gantz, because they are opposed to the very foundation of Israel as a Jewish state.

While Gantz knows the Arab parties are unwilling to join him to form a blocking coalition, he also knows that if they suddenly would change their tune, Avigdor Lieberman’s Yisrael Beiteinu Party would refuse to sit along side the Joint List, leaving Gantz still way short of a majority. So Blue and White is now advancing a different idea: the passing of a law prohibiting a sitting prime minister from serving while under indictment.

Israel’s current law explicitly permits a sitting prime minister to serve while under indictment and even through a conviction, until all appeals processes have been fully exhausted, a process which could take several years. While the Gantz-supporting Zionist opposition parties and the Joint Arab List refuse to sit together, they are all willing to pass legislation specifically aimed at removing Netanyahu from office.

Without the votes of self-proclaimed anti-Zionists, Gantz could never hope to pass such a bill.

As for the Arab parties, the reason they are willing to pass legislation drafted specifically to remove Netanyahu from office—when they could otherwise care less which pro-Israel leader was prime minister—is because they recognize what the plurality of Jewish voters recognize: Netanyahu is a much stronger leader than Gantz, one whose record of strengthening the State of Israel, economically and militarily, is indisputable and unparalleled.

The Arab parties know that Gantz as prime minister (or even a new candidate from another party) would likely be measurably weaker than Netanyahu, who after 11 years at the helm is showing no signs of slowing down.

What can be done?

As Blue and White pursues a parliamentary putsch to oust Netanyahu after dramatically failing to defeat him at the polls, the prime minister should counter with a parliamentary maneuver that exposes Gantz’s allies of convenience.

While the Arab parties believe that they can essentially hold the Knesset hostage by preventing the formation of either a left- or a right-wing majority government, Netanyahu should introduce legislation demanding that each and every MK make a pledge of loyalty to the state, based on the full acceptance of the principles canonized in Israel’s Basic Law: Israel as the Nation-State of the Jewish People, which states that:

Any MK unwilling to make this loyalty pledge should not have a parliamentary mandate to vote for or against the formation of an Israeli government coalition, or to pass or reject laws for the citizens of Israel.

By introducing such legislation, Netanyahu would put the Arab MKs on notice that Israel will not agree to have fifth column roaming the halls of its parliament, and that their primary concern should be representing the interests of their constituents, not diminishing of power of the State of Israel.

Meanwhile, this endless cycle of elections demands that members of the opposition admit their clear electoral defeat and do the responsible thing: join a Netanyahu-led government. And if none of the 47 ostensibly Zionist anti-Netanyahu-bloc MKs want to act in accordance with the explicit will of Israel’s electorate, then Netanyahu should consider forming a minority government.

Otherwise, Blue and White, the Joint List, as well as Avigdor Lieberman, Israel’s attorney general and other forces opposed to Netanyahu’s continued leadership will continue to wreak total havoc on our fragile political system—that only works when 100 percent of our parliamentarians actually believe in the vision of a Jewish state.