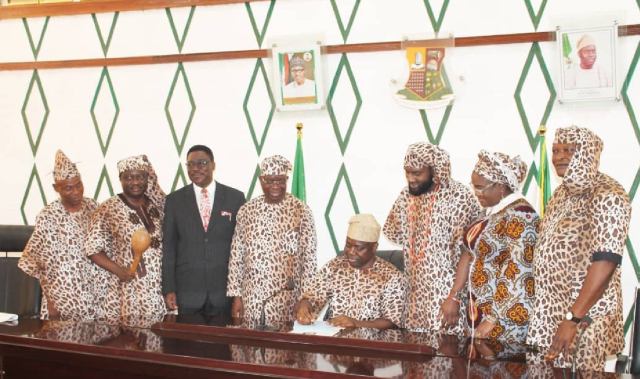 …As La Liga set to be played behind closed doors, for at least two weeks***

The newsmen report that governors in the South West Zone under the chairmanship of Gov. Rotimi Akeredolu of Ondo State had on Jan. 9, in Ibadan, launched the Amotekun initiative.

The launch necessitated the process of giving legal backing to the initiative by the Houses of Assembly in the six states.

The Oyo  State House of Assembly on Feb. 24  held a public hearing on the bill and passed it on March 3.

In his remarks after signing the bill, Makinde said that the process for the establishment of Amotekun security outfit started in July, 2019.

The governor noted that security agencies had been stretched to the limit, stressing that there were challenges in the North-East where some of the personnel were deployed.

“But we still need to create a safe and secure environment at the state and local government levels so that our people can go about their lawful business.

” I’m also using this opportunity to thank our security agencies for the work they are doing,” he stated.

The governor warned criminally minded people to stay away from Oyo State and the entire South-West geo-political zone, saying “Amotekun would get them if they refuse to leave.”

He gave an assurance to investors to come to Oyo State, saying the state is safe and secure for business.

The Deputy Governor,  Mr Rauf Olaniyan, Secretary to the State Government, Mrs Olubanwo Adeosun, Chief of Staff, Bisi Ilaka, and other top government functionaries witnessed the signing of the bill.

Mr Debo Ogundoyin, the Speaker of the State House of Assembly, led other lawmakers to present the bill to the governor for his assent.

In the meantime, La Liga matches will be played without fans for at least the next two rounds of fixtures to try and stop the spread of coronavirus, the Spanish league said on Tuesday.

FC Barcelona also said its UEFA Champions League clash with Napoli next week would be played behind closed doors, while Valencia’s game with Atalanta would also take place without any supporters.

The decision was taken in conjunction with the directive by the Spanish government’s sports council (CSD) that professional and non-professional sports events and competitions should take place behind closed doors.

“According to information from the High Council of Sports, La Liga Santander and La Liga SmartBank (second division) matches will be played behind closed doors, starting today (March 10) and for at least the next two weeks.

“La Liga will continue to be in permanent contact with the Ministry of Health and the CSD to follow its recommendations and/or decisions, prioritising the health of fans, players, club employees, journalists etc. due to the COVID-19 health crisis.

“For weeks, La Liga has been working on alternative plans in coordination with UEFA in case health authorities decide to suspend any match, creating a plan to play these matches,” La Liga said in a statement.

The first match affected is the clash between Eibar and Real Sociedad later on Tuesday at Ipurua Municipal Stadium, a game already postponed from Feb. 16 because of air contamination.

If the measure is not extended, the next round of matches with supporters will take place on the weekend of April 4 to April 5.