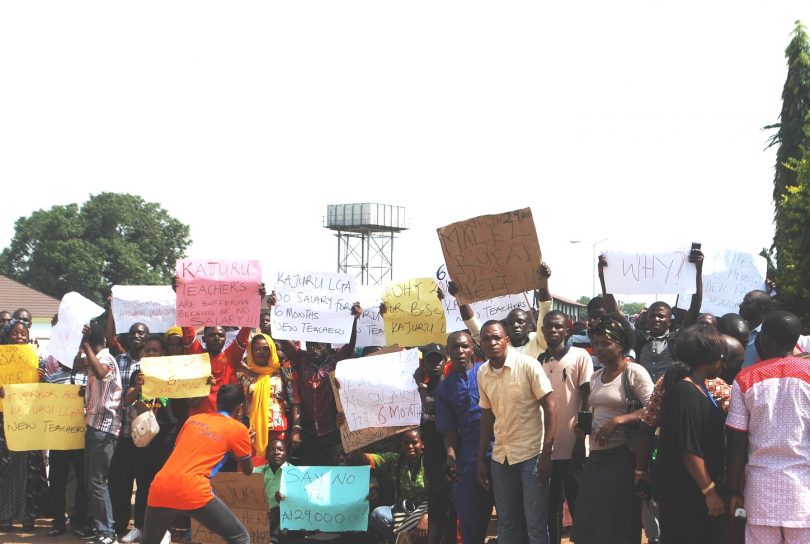 No fewer than 82 primary school teachers from Soba Local Government Area of Kaduna State on Monday protested over non-payment of their four months’ salaries.

The protest was carried out at the Ministry of Local Government Affairs in Kaduna by the batch ‘B’ teachers recruited by Kaduna Government in 2018.

The leader of the protest, Nasir Abubakar, alleged that Soba Local Education Authority had not only stopped their salaries, but also trying to sack them and replace them with others.

“We have been wrongly accused by the Education Secretary of Soba Local Government of absconding from our duties, but that’s not true. We go to work five times a week, yet our reward is four months of nonpayment of our salaries.

“We spend not less than N1, 000 daily to our various primary schools at different locations in the local government, but paying us our rights has become a problem.

“We have followed all due processes to ensure that our money was paid, but the authorities keep referring us from one person to another.

“We are pleading with the Governor of Kaduna State to investigate and punish anybody found jeopardizing his efforts of sanitizing the educational affairs of the state and the welfare of his teachers,’’ he said..

One of  the protesters, Muhammed Isah said: “We have families; for four months they have denied us our salary, we are being accused of absconding from our duties wrongly, if they no longer require our services they should pay us our arrears and dismiss us.”

Another protester, Hajara Umar, said: “I have had accident twice on my way to Soba but I never relented in the discharge of my duties nor absconded.

“I struggle with my infant child to make sure that l discharge my responsibility as a teacher but four months of nonpayment of salary is what we get as reward.’’

When contacted the Education Secretary, Malam Aliyu Abdullahi, said that the salaries of the teachers were “put on  hold” as they were allegedly found to have absconded from their places of work.

He however said that the local council was still investigating and its decision would be revealed later.

Also speaking, the Director of Administration and Finance of the Ministry, Hassan Junaid, said that the protesters had presented their grievances in writing which was forwarded by the ministry to the Chairman of State Universal Basic Education Board (SUBEB).

“We are appealing to them to stay calm as we will invite the local government chairman and table all the complaints from his people.

“We will also invite SUBEB and discuss with them to find solution to this problem,’’ Junaid said