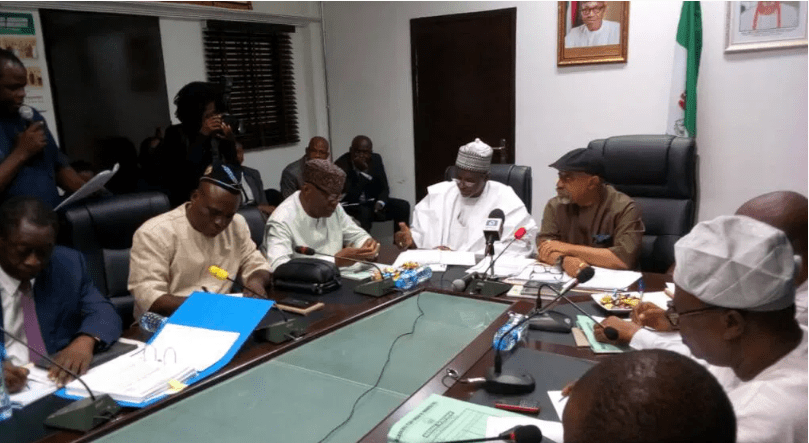 …As Director says ‘We posted all NYSC members before closing camps’***

The Academic Staff Union of Universities (ASUU) says it has reached concrete proposals with the Federal Government on the ongoing warning strike embarked upon by the union.

Mr Biodun Ogunyemi, ASUU President said this in Abuja while addressing newsmen at the end of a closed-door reconciliatory meeting at the Ministry of Labour and Employment.

The meeting which began by 3 p.m ended at about 11 p.m on Tuesday.

It would be recalled that ASUU began the warning strike on March 9 2020, after disagreement with the Federal Government over issues of revitalization of universities, earned academic allowance.

Others are visitation panel, mainstreaming and most importantly Integrated Payroll and Personnel Information System (IPPIS) always and other issues relating to university funding.

Ogunyemi said that no pronouncement would be made until after presenting the new government proposals to members of the union.

“But as we usually say, those of us here cannot give the final pronouncements on any of the proposals and we have assured the government that we will report faithfully to our principals and get back to government accordingly.

“We want to assure all Nigerians that we are concern on going back to our work like every other person because we know that is where we find happiness, we are not happy outside our classrooms, our laboratories and our libraries.

”So, in view of this we will do our best to ensure that all concerns have the maximum benefits from this action because it is of national interest.

He said, “the meeting was longer than anticipated because we had to look at all the issues that were in our 2019 Memorandum of Actions, especially those that had not been fully addressed. We made new proposal on behalf of FG to ASUU.

“These issues range from funding, revitalization of public universities, earned academic allowances, salary shortfalls in Federal University of Akure and the issue of state universities.

“We also addressed payment of earned academic allowances to University of Ilorin.

“On the Nigerian University Pension Commission, certificate was issued last year but operational certificate had not been issued because we do not have a permanent PENCOM board in place.

“We have made proposal on how NUPENCO board will be able to fulfill its obligation, especially in terms of preparation of annual audit reports.

“Issue of visitation panel to the universities has been on the table since last year. The Government side made progress and that approval has been gotten, and we are waiting for the gazette of the membership of the visitation panel. ”

The minister noted that the Issue of IPPIS was also discussed and options and solutions were advanced.

He said that the government had a proposal,  which had been given to the ASUU.

“We have agreed on tentative date to get back to government is before the weekend runs out. We expect ASUU to write the government before then to see if there will be need for further meeting,” he added.

Those present at the meeting included the Minister of State, Labour and Employment Mr, Festus Keyamo (SAN), Executive Secretary of the National University Commission.

Others are Minister of State for Education, Accountant General of the Federation, Permanent Secretaries in the ministries of labour and that of education.

In the meantime, the National Youth Service Corps (NYSC) on Wednesday said it had planned ahead of the emergency closure of all camps across the country and posted corps members for their primary assignment.

The South West Director of the scheme, Mr Attah Emmanuel, stated this on Wednesday.

“We have planned ahead of this and we have taken the decision to close all camps in the best interest of the nation and that of our corps members as well as staff members.

“I can confirm to you that all our corps members have been posted to their respective places of primary assignment and we have also rushed through some of the orientation programmes,” he said.

He revealed further that the directive from the headquarters was for all camps to be closed by Wednesday across the country.

The three-week compulsory orientation course for corps members was abruptly ended by the Federal Government in a bid to curtail possible spread of the coronavirus.