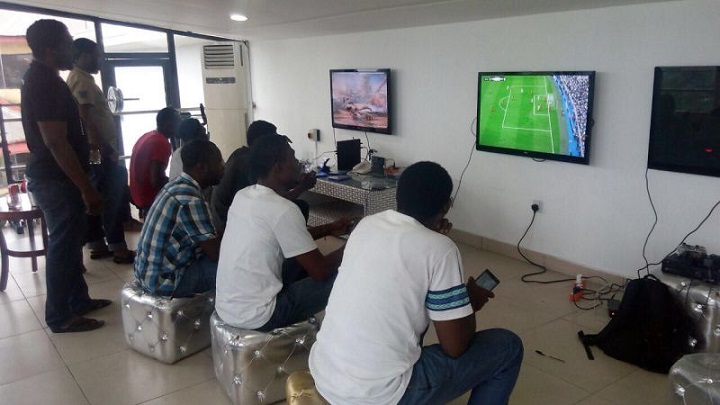 Operators of viewing centers in Kano have decried the low patronage sequel to suspension of the European League occasioned by the coronavirus crisis.

A cross section of the center operators, indicated on Thursday in Kano, that the pandemic had negatively affected the trade and exposed them to losses.

Aminu Sa’ad, a viewing center operator, said that the number foot ball fans patronasing the center has dropped since the suspension of the Champions and European Leagues.

He said: “The suspension is regrettable; we spend much on subscription which is expensive, we are now running the centre at a loss”.

Another centre operator, Isa Zakari, described the trend as discouraging as fans were no longer trooping to watch foot ball matches at the centre.

Zakari recounted that he was making good saving from the centre before the outbreak of coronavirus, and expressed the hope that efforts to control the pandemic would yield positive results, to enable them resume operations.

Mr Albert Eze and Kasim Mustafa, who corroborated earlier opinion, said they now resorted to showing movies to enable them stay in business.

“Following suspension of the of the foot ball leagues in Europe, we are now showing Nigerian, Indian and other movies so as to keep the centres running.

“I also sell soft drinks and snacks rather than closing down the centre,” Mustafa said.

Meanwhile, the International Labour Congress (ILO) says almost 25 million jobs could be lost worldwide as a result of COVID-19 pandemic.

Mr Guy Ryder, ILO Director-General, said this in a statement on Thursday in Abuja.

He said the findings was according to a new assessment by the ILO.

”An initial assessment of the impact of COVID-19 on the global world of work says the effects will be far reaching, pushing millions of people into unemployment, underemployment and working poverty, and proposes measures for a decisive, co-ordinated and immediate response.

“However, if we see an internationally coordinated policy response, as happened in the global financial crisis of 2008 and 2009, then the impact on global unemployment could be significantly lower, ” he said.

He said the preliminary assessment note, COVID-19 and the world of work: Impacts and responses , calls for urgent, large-scale and coordinated measures across three pillars.

He noted that the three pillars are protecting workers in the workplace, stimulating the economy and employment, and supporting jobs and incomes.

“These measures include extending social protection, supporting employment retention such as short-time work, paid leave, other subsidies and financial and tax relief, including for micro, small and medium-sized enterprises.

”In addition, the note proposes fiscal and monetary policy measures, and lending and financial support for specific economic sectors,” he added..

Ryder also said the ILO estimated that between 8.8 and 35 million additional people would be in working poverty worldwide, compared to the original estimate for 2020, which projected a decline of 14 million worldwide.

According to him, there must be swift and coordinated policy responses to the issue.

“This is no longer only a global health crisis, it is also a major labour market and economic crisis that is having a huge impact on people.

“In 2008, the world presented a united front to address the consequences of the global financial crisis, and the worst was averted. We need that kind of leadership and resolve now.

“This is no longer only a global health crisis, it is also a major labour market and economic crisis that is having a huge impact on people, ” he said.

He said the ILO warns that certain groups will be disproportionately affected by the jobs crisis, which could increase inequality.

He added that these include people in less protected and low-paid jobs, particularly youth and older workers. Women and migrants too.

“The latter are vulnerable due to the lack of social protection and rights, and women tend to be over-represented in low-paid jobs and affected sectors.

“In times of crisis like the current one, we have two key tools that can help mitigate the damage and restore public confidence.

“Firstly, social dialogue, engaging with workers and employers and their representatives, is vital for building public trust and support for the measures that we need to overcome this crisis.

“Secondly, international labour standards provide a tried-and-trusted foundation for policy responses that focus on a recovery that is sustainable and equitable.

“Everything needs to be done to minimise the damage to people at this difficult time,” Ryder said.