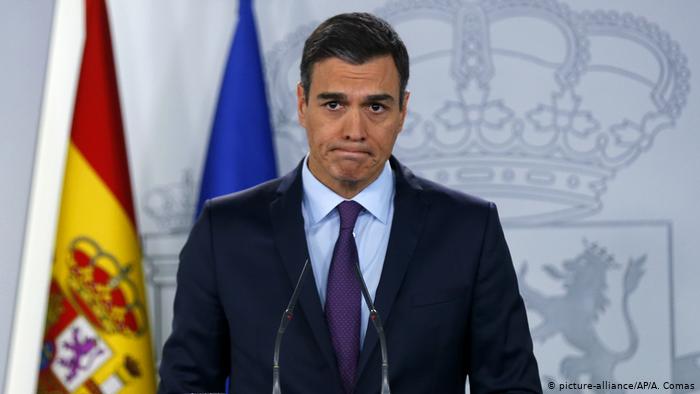 Confirmed coronavirus cases in Spain jumped 14 per cent in the past 24 hours to Monday, with 480 additional deaths bringing the nation’s total to 33,000 cases and 2,200 deaths.

Of those deaths, around 1,200 have been recorded in the capital Madrid, which has now emerged as the epicentre of Spain’s outbreak.

Figures from Spain’s Health Ministry offered a glimmer of hope amid the grim news: 3,300 patients have now recovered from the virus.

“The number of daily recorded cases is also decreasing, but we are unsure whether we have hit the peak already.

“These are decisive days,” the expert added, and predicted that Spain would reach the peak of its outbreak at some point during the coming week.

“If the measures are applied well it is highly probable that a time will come soon when we begin to de-escalate.

“That will be a key moment,” Fernando Simon, head of Spain’s Health Alert and Emergency Coordination Centre (CCAES) said.

Spain is the second worst-hit European nation after Italy in the global coronavirus pandemic.

Spanish Prime Minister Pedro Sanchez announced on Sunday that the nationwide lockdown affecting the movements of just under 47 million citizens would have to be extended in order to gain control over the outbreak.

Since March 15, authorities in the country have allowed people only to leave their houses in emergencies and to shop for food.

The lockdown was originally set to last 15 days but will be extended until April 11, subject to a parliamentary vote this week.

Macau and Taiwan will not be allowed to enter Hong Kong if they have visited foreign countries in the past 14 days.

Residents and non-residents entering Hong Kong from Macau or Taiwan are to undergo 14 days’ quarantine.

Lam is also to suspend the liquor licences of 8,600 bars and restaurants across Hong Kong from Wednesday, in the hope that preventing the sale of alcohol sparks further social distancing.

Meanwhile, Hong Kong police on Monday reported that, since last week’s introduction of compulsory quarantine  orders for people arriving from abroad, there have been 36 breaches, with some people cutting off traceable wristbands and leaving their premises.

Since the 14-day self-isolation order came into effect on March 19, police have been conducting spot checks against suspected offenders with the aid of electronic monitoring systems, police said in a statement.

It added that they have placed the 36 people who breached the orders on the wanted list and continue to locate them.

Leaving the place of quarantine is a criminal offence, with possible penalties including a six-month prison sentence and a fine of 25,000 Hong Kong dollars (3,200 U.S dollars).

Hong Kong reported 44 new cases of the new coronavirus on Monday, according to latest figures from the Centre for Health Protection (CHP), bringing its total cases to 318.

Of the new cases 29 were imported, with those infected all recently returning from abroad, the CHP said.