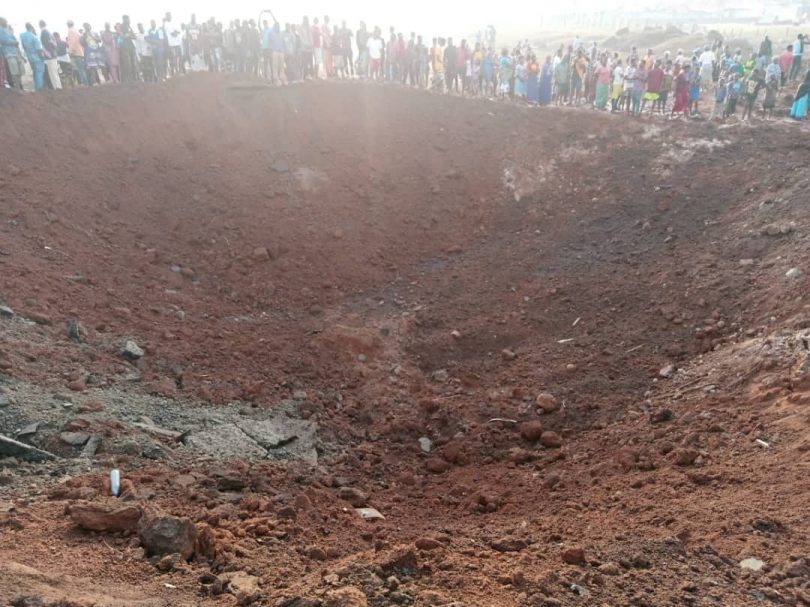 A truck loaded with dynamite exploded at Ilu Abo on the Akure-Owo expressway on Saturday, destroying a school, church and some houses.

No life was however lost in the incident which occurred at about 1:00am, even though the severity of the blast literally  cut the Akure-Owo expressway in two. An alternative road was immediately provided for motorists

Undie Adie, the Commissioner of Police in the state, told newsmen at the scene of the incident that the truck was carrying dynamite for a quarry company.

Adie, who said that the consignment was duly escorted by personnel of the police Explosive Ordinance (EOD), added that the vehicle developed a fault and exploded on the road.

“The truck was coming from Lagos State to Edo State; unfortunately along the road, their vehicle developed a fault and the driver noticed it.

”In fact from the explanation of the escort commander, they had to try to move it away from where there were houses.

“When they parked and came out and noticed there was smoke coming out from the engine, the driver’s effort to put it off was not possible and fire broke out,” he said.

The commissioner said the police escort had to deploy the standard professional drill in handling the incident.

”We thank God that this area houses a church and school; fortunately the school, because of the closure, had no student.

“But we have commenced investigation and I have called the managing director of the company who was to receive the consignment,” he said.

Adie admonished residents of the area to stay far away from the scene of the incident to avoid unnecessary accidents.

He said that personnel of the EOD in the command had been on the ground since the incident occurred to cordon the area.

Also.speaking, Brig.-Gen. Zakari Abubakar, the Commander of 32 Artillery Brigade, Akure,   urged residents to remain calm, saying the security agencies were on top of the situation.

Mr Rotimi Adeleye, the State Commander of FRSC, said that men of the command had been deployed on the road to ensure order on the highway. He said an alternative road had been provided for motorists.

In the meantime, Gov. Oluwarotimi Akeredolu of Ondo State has urged residents to steer clear of Saturday’s explosion site.

The governor, who visited the scene of the explosion on Saturday, said the destruction caused by the explosion could only be imagined, advising residents to allow the bomb squad to do its job.

“I have had thorough briefing from the head of our security agencies and the preliminary reports received was that it was an accidental discharge of explosives that were in transit through Ondo state to another state where it was needed.

“We will advise all citizens, all residents of Ondo State, not to come near this place at all, they should vacate and move out of this premises.

“As we are told, the vehicle that was carrying these explosives is buried in the crater it created, so we never know what number of explosives are left.

“Let everybody give the police, the bomb squad, space to do their work and we will know what to do,” he said.