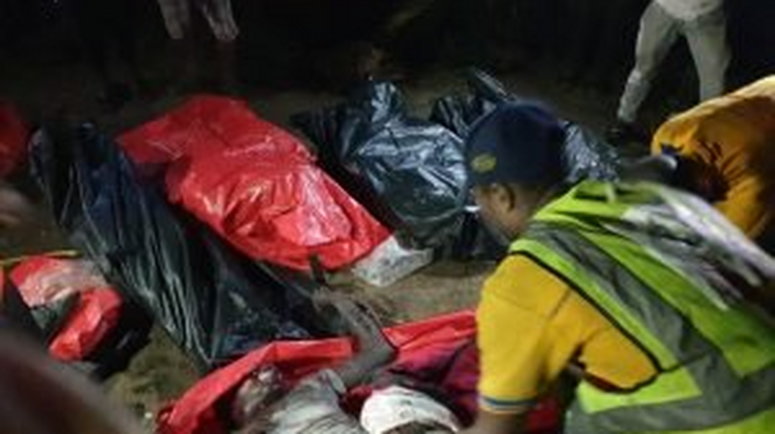 Oke-Osanyintolu indicated this on Wednesday in Lagos noting that six out of the seven persons involved lost their lives after the truck with unknown registration number fell on the fully-loaded commercial taxi OPEL car with registration number Lagos SMK-312ES.

”Seven people were in the crushed car and six of them lost their lives.

“After the accident, the response team rescued the only surviving man, who was trapped beneath the truck. He is now receiving treatment in the hospital.

“We have handed over corpses of deceased persons to the Federal Road Safety Corps (FRSC) to transport them to the mortuary.

“We appeal to members of the public to comply with the COVID-19, lockdown and social distancing guidelines to avoid endangering themselves,” Oke-Osanyintolu said.

He also urged the rescue workers to follow the social distancing guidelines of the Lagos state government.

In the meantime, the Federal Road Safety Corps (FRSC) has blamed Tuesday’s crash involving a truck and a commercial taxi on Epe Long Bridge on impatience, overloading and disregard to government directives.

He particularly grieved that in spite of the lockdown in the state, a truck still crushed six persons to death in a commercial taxi on  Epe Long-bridge along Epe Expressway on Tuesday evening.

Reacting to the incident, Mr Samuel Obayemi, the FRSC’ Zonal Commanding Officer in charge of Ogun and Lagos States, maintained on Wednesday that the crash was avoidable if the victims had obeyed government’s directives or had been patient on the bridge.

Obayemi, an Assistant Corps Marshal, said that until people started to obey simple road safety tips in their own interest, some of the avoidable crashes would continue to occur.

“If the victims had adhered strictly to the directive that people should stay at home, I am sure that would not have happened, it would have been avoided.

“Another thing is that some people still overload their vehicles. If they had not overloaded the OPEL taxi, for instance, the number of people that died would not have been up to six.

“Looking at the place where that crash happened, it was as a result of impatience on the part of one of the vehicles, while overloading was also part of it.

“We shall, however, not relent in our efforts to stem this tide, but the directive by the state and the Federal Government that everybody should stay indoor for our own sake and good to contain the dreaded Coronavirus pandemic should be strictly adhered to,” Obayemi said.

The FRSC boss, who decried flagrant disregard to safety tips, said the government’s regulations were made in the interest of road users.

According to him, the truck and the car involved in the crash had no business being on the road.

“If they had listened to government’s directives that would have been avoided. We will continue to do our best.

“People should obey the directive that they should remain at home if they are not on essential service,” Obayemi said.

The zonal commander urged motorists, who were exempted from the restrictions, not to use the free roads to speed or be careless on the roads.

“Those on essential services should also obey the traffic rules. They should observe social distancing, and not overload their vehicles.

“They should avoid over speeding and know that there are other road users. They should not afford to be careless,” he said.

The taxi and the truck were operating in spite of the lockdown order imposed on Lagos by the Federal Government to prevent the spread of COVID-19.

President Muhammadu Buhari, in a Presidential broadcast on the pandemic on Sunday, directed cessation of all movements in Lagos and the FCT for an initial period of 14 days with effect from 1100 p.m. on Monday.

Buhari, who directed that the restriction should also apply to Ogun State due to its close proximity to Lagos and the high traffic between the two states, said that the step was to stop the spread of the virus.

Some categories of people providing essential services were, however, exempted from the restriction.