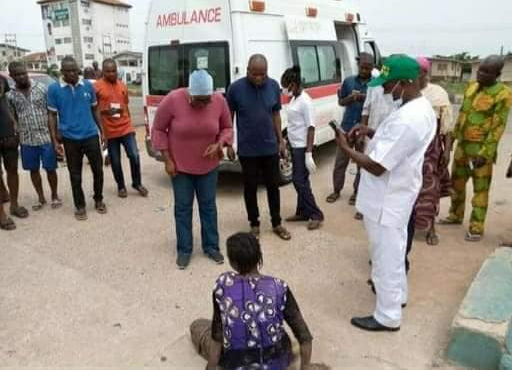 …As Ekiti women, say Lockdown is a “blessing in disguise”***

A middle-aged woman, on Wednesday, attempted taking her life in Osogbo by jumping into Osun river before she was rescued by residents of the area.

The woman, who identified herself as Kafayat Alake, shortly after the rescue, said she decided to end her life out of the frustration, occasioned by economic hardship.

“The whole thing happened so fast that we could not stop her.
“However, after she had jumped, people called for help, prompting me to dive in and pull her out of the water,” he narrated.
Speaking incoherently, the rescued Alake, who hails from Alapaaro, Isale Osun, Osogbo, said that she had three children, whom she could no longer cater for due to her financial predicament.

Alake, who said that she had been separated with her husband for 13 years, added that he (the husband) lived in Lagos.

The Special Adviser to the Governor on Public Health, Dr Olamiju Olasiji, who said he could not comment until he got proper briefing on the incident, later called the State Emergency Ambulance Service (O’ Ambulance) which took the woman away for proper medical attention.

When contacted, the state Police Public Relations Officer, Mrs Yemisi Opatola, confirmed the incident, saying that the woman had been taken to the hospital for proper medical attention.

She, however, said that preliminary investigation showed that Alake might be having some mental challenges.

Meanwhile, some married women in Ado-Ekiti on Wednesday say the ‘stay-at-home’ order occasioned by the coronavirus pandemic, has turned out to be a blessing in disguise for them.

The women noted that the lockdown had forced their husbands to have time for the family.

Mrs Iyabo Obayemi, a civil servant, said in her 10 years of marriage, she and her husband never stayed together for 24 hours uninterrupted, adding that she was happy with the stay-at-home directive of the governor.

She said her husband worked in Lagos, and that had been a major challenge for the family since she could not resign her job to live with him, and vice versa.

She expressed happiness as she had been inseparable from her husband for some days now, while the children were excited over their father’s presence at home without having to go out to see friends or relatives.

Another woman, Mrs Toyin Bewaji, said she was happy to reunite with her husband as the earliest time he had always arrived home was 11pm when the children would have slept.

She said her joy knew no bound as her husband had been participating in morning prayers and also helping with chores such as laundry and even helping in the kitchen.

Mrs Dupe Onipede said she was happy to see her husband spending time with her and the children, saying the lockdown had brought her husband closer to her.

She lamented the way her husband had always been coming home late and therefore lauded government for shutting all joints of social activities in the state.

“This has made my husband have a change of attitude towards us.

“For the past two days now, my husband had been with us,” she stressed.